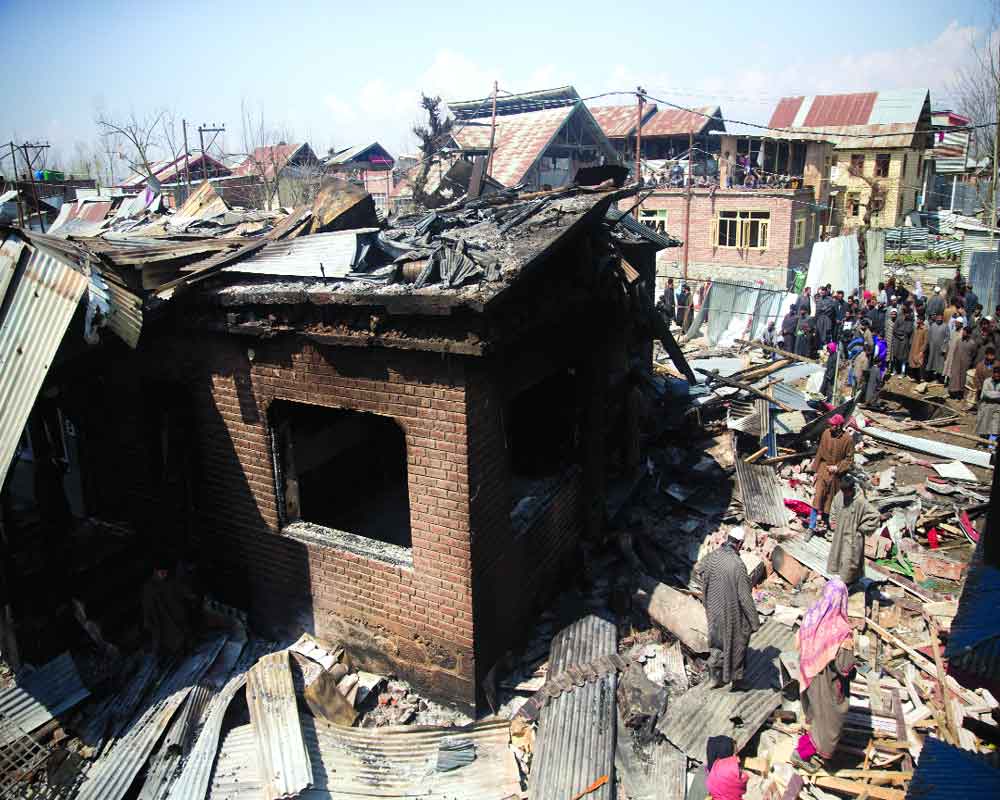 In a major crackdown on foreign terrorists operating in Kashmir Valley, joint teams of security forces neutralised at least eight terrorists in four separate operations in the last 24 hours while one minor boy, held hostage by the terrorists, killed by them during the fierce firefight in Hajin area of Bandipora on Friday.

Two terrorists each were eliminated in Bandipora, Baramulla and Shopian encounters while one terrorist was eliminated in Sopore gun battle. The operation in the Hajin area lasted almost 24 hours and was executed carefully by the security forces to contain any collateral damage. The dead bodies of the terrorists and the minor boy were recovered from the debris of the house, razed to the ground in final assault.

The operation in the thickly populated area started around 9.00 am on Thursday while cordon and search operations (CASO) were going to track down the presence of Lashkar-e-Toiba (LeT) terrorists in the area.

According to ground reports, the holed up foreign terrorists had held at least eight family members hostage inside the house and were adamant on releasing them. In Shopian encounter, according to police spokesman, prima facie a group was believed to be responsible for the killing of lady police official Khusboo Jan earlier this week in Shopian. One police official identified as Tariq Ahmad was injured in stone pelting while three others also sustained injuries.

Unconfirmed reports suggested terrorists visited the house in Hajin area of Bandipora in search of a girl of their liking. Reports claimed after the family members came to know about their motive they shifted her to some other safe location. As terrorists waited inside the house and insisted on bringing her back security forces, conducting CASO operations in the area were tipped off about their presence in the area. SSP Bandipora Rahul Malik also confirmed that two terrorists were moving in the area in search of a girl when the operations started on ground zero. After the operation was called off, Malik told reporters, “We were receiving regular inputs about the presence of foreign terrorists in the area. He said three CASOs were launched and in the third operation chance encounter with the terrorists took place in densely populated area of Hajin.”

He said, “In the first two hours of the operation at least six civilians, who were held hostage by the foreign terrorists were rescued from inside the house.” After some time, we came to know about the presence of two more hostages, including a minor boy inside the house.

Malik said, “We roped in close family members of the hostages who made passionate appeals to release the boy and his uncle but they failed to convince the terrorists.”

Later members of the Auqaf committee were also roped in and appeals were made from local religious places to release the hostages. Malik said for nine long hours we waited patiently but in vain. In the evening, firefight started from both the sides as terrorists opened fire when commandos of the special operations group stormed the building.

Police spokesman in a written statement said, “From the incriminating material recovered at the site of encounter it is understood that the two killed terrorists were Pakistani nationals identified as Ali and Hubaib. As per police records, both were affiliated with proscribed terror outfit LeT,” the statement said. Meanwhile, two more terrorists were killed in an encounter in Shopian district’s Ratnipora area on Friday.

Another operation was conducted in Sopore’s Warpora area where security forces killed another terrorist after a gunfight on Friday. As a precautionary measure, internet services were snapped in Shopian and Sopore while in other parts of south Kashmir, it has been reduced to 2G. All educational institutions also remained closed in Sopore.

Earlier, on Thursday, two Jaish-e-Mohammad (JeM) militants were killed in an encounter with security forces at Kalantara in Baramulla district while three security force personnel, including an officer, suffered injuries during the operation.

According to police, one of the two terrorists killed in Baramulla has been identified as Aamir Rasool of Sopore and from the incriminating material recovered at the site of encounter, it is understood that the other killed terrorist is a Pakistani national.

Police spokesman said they were wanted by law for their complicity in a series of terror crimes including attacks on security force establishments and civilian atrocities.

According to police records they were also responsible for conspiring and executing many terror attacks in the area. Several terror crime cases were registered against them.

According to police, a personal security officer (PSO) of Municipal Council Anantnag chairman Hilal Ahmad Shah was wounded in an attack by terrorists.

Witnesses and reports said terrorists opened fire on the policemen in the premises of Municipal Council office Anantnag.

They said a PSO of Shah was wounded in the attack. The injured, identified as Irshad Ahmad, were shifted to a nearby medical facility for treatment, said an official. His condition was stated to be critical.