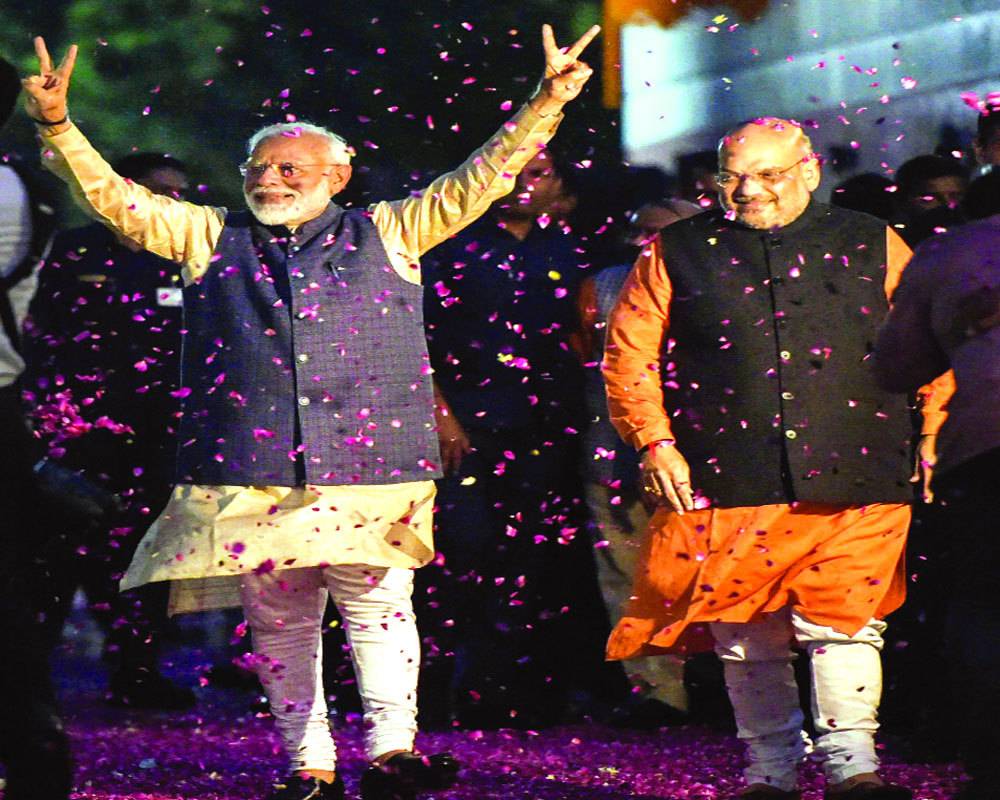 Modi hai to mumkin hai. The evocative tagline of the BJP campaign aptly reflects the party’s massive victory in the Lok Sabha polls. The brand ‘Modi’ has outshone every competitor, be it regional satraps or Congress president Rahul Gandhi, who found few takers for his “chowkidar chor hai” jibe at the PM.

The result shows the BJP has emerged as a pan-India force as the saffron party made big inroad into the strongly protected fortresses of Mamata Banerjee’s West Bengal and Navin Patnaik’s Odisha. Except Kerala and Tamil Nadu, the footprint of the BJP is clearly visible all over the country.

The result emphatically negated pre-poll calculations that the coming together of anti-BJP forces in several States could stop Modi’s juggernaut there. While the Uttar Pradesh’s mahagathbandhan of Samajhwadi Party and BSP did pull down the BJP a bit, but in Bihar, Jharkhand, Karnataka and Maharashtra, no one could withstand the force of the all-pervasive Modi wave.

The outcome is particularly worrisome for West Bengal Chief Minister Mamata Banerjee, who had emerged as the most vocal critic of the Prime Minister during the poll campaign. All the seven phases of the polls were marred by violence, and both the PM and BJP chief Amit Shah had warned that those engaged in bloodletting will pay for it after the elections. Now, that the BJP stands neck and neck with the TMC in terms of tally and its voting percentage has increased phenomenally, the party is expected to make a big push to grab power in the State in next Assembly polls.

The West Bengal result shows that, like in every other part of India, there has been a significant consolidation of Hindu voters in the State with 27 per cent Muslim population. The BJP’s strategy to centre its campaign around Hindutva paid off rich dividends.

The BJP victory is all the more significant because the party crossed halfway mark of 50 per cent seats in 17 States such as Gujarat, Maharashtra, Madhya Pradesh, Haryana, UP, Rajasthan, Arunachal Pradesh among others.

The Congress will have a lot to think after its pathetic show. Rahul Gandhi may have won from Wayanad with a record margin, but his humiliating defeat at the hands of Smriti Irani in the family pocket borough of Amethi is the cruelest blow the BJP has inflicted on the Congress chief.

There is no denying the fact that Hindutva and nationalism were the two most prominent agenda for the BJP. No surprise Sadhvi Pragya Singh Thakur was able to vanquish veteran Digvijaya Singh despite calling Nathuram Godse a nationalist. Giriraj Singh’s massive victory over Kanhaiya Kumar is also reflection of the success of the party’s Hindutva agenda.

The BJP victory is undoubtedly fuelled by the support of all sections and caste, but it is believed that even a significant section of the Muslim voted for the saffron outfit. Senior BJP leader Mukhtar Abbas Naqvi put this number to 30 per cent.

The overall result shows that Modi’s personal charisma has once again shattered traditional caste barriers and caught the imagination of the young generation, impressing upon them that their future lies with a powerful India that is both a strong economic and military power -something that could only be achieved by leaving the baggage of narrow caste politics behind.

The BJP capitalised on the horribly mismatch of JD(S)-Congress alliance in Karnataka, rode on Modi wave in Gujarat and regained lost ground in Madhya Pradesh and Rajasthan to leave the Congress licking its wound in the four crucial States where Rahul Gandhi and his managers had pinned great hope to take their tally into three digits.

Similarly, the BJP and its ally Janata Dal(U) trounced Bihar Opposition alliance into smithereens clearly showing that the powerful wave of Hindutva had also converged with massive mobilisation of anti-Yadav OBC votes in their favour.

If the consolidation of the anti-Yadav OBC vote in favour of the BJP was the story of the cowbelt, then the success of the BJP in wooing the Dalits to its fold was near pan-India story. The preliminary analysis of the voting pattern even in UP suggests that non-Jatav Dalit went majorly with the BJP.

The poll outcome also shows that despite their grievances with the BJP over demonetisation and ill-implementation of the GST both the middle class and trader community continued to side with the BJP, which expanded its support base by effectively implementing the slogans of “catch them young”.

Initial data showed that majority of the first time voters across caste divide preferred Modi over the rest. Modi’s war cry against Pakistan and “ghar me ghus kar marenge” type slogans endeared him into younger generation that saw him a real hero that would settle score with a villain (Pakistan) that has been hurting them for years.

The result leaves the Congress literally into doghouse and raises serious question mark over the leadership of Rahul Gandhi. The fact that the Congress has not even got enough number of seats to claim the position of Leader of Opposition in Lok Sabha is something that Rahul cannot brush aside.

The party may go into a huddle or introspect on what went wrong, but its faces serious existential dilemma now. Knowing the way Amit Shah functions, it is anybody’s guess how long the Congress Government in Madhya Pradesh and Karnataka will survive.

Rahul is going to face flak over going alone in Uttar Pradesh where the party only helped the BJP by cutting into the SP-BSP votes. There is belated realisation in the party that instead of focusing on UP where the Congress had nothing to gain, Rahul and Priyanka should have tried to focus their energy on Madhya Pradesh, Rajasthan, Chhattisgarh and Karnataka where the Congress could have done far better.

The poll outcome also shows that the country is changing and changing very fast. A change that wants to see India emerge as a ‘muscular’ power that also caters to the needs of its poor. If the BJP exploited the Balakot strike by displaying the muscular strength of the Modi Government, it also went to town counting the pro-poor schemes like Ujjwala, housing for poor, Jandhan Yojna, Ayushman and Mudra schemes, etc.

The fact that Rahul’s “chowkidar chor hai” attack on the PM failed miserably shows that the Modi has been able to convince the nation that he led a regime which is far different from the corruption-ridden regime of the past.

Before Modi’s glittering package of a ‘muscular’, pro-poor, pro-development and honest pro-Hindutva regime, the Opposition looked like hawking the same stale goodies of social justice and secularism. In changing India, voters clearly preferred the former.