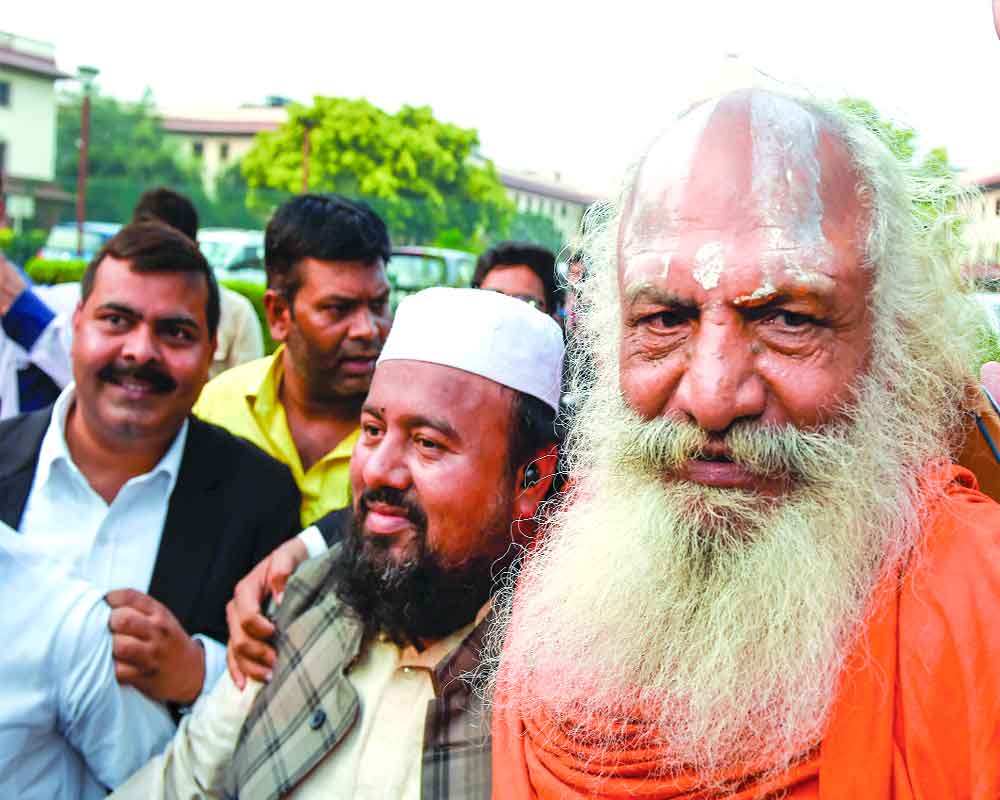 Acrimonious exchanges between parties on last day of arguments

The Supreme Court on Wednesday wrapped up the 40-day hearing in the decades-old temple-mosque dispute in Ayodhya — the second longest proceedings in its history — and reserved its verdict in the politically sensitive case that is expected in a month’s time.

The concluding day of the marathon hearing during which Chief Justice Ranjan Gogoi heading a 5-judge Constitution Bench observed “enough is enough” was marked by high drama when Rajeev Dhawan, a senior counsel for the Muslim parties, tore a pictorial map provided by Hindu Mahasabha purportedly showing the exact birthplace of Lord Ram in Ayodhya in Uttar Pradesh.

The high voltage hearing in the Ram Janambhoomi-Babri Masjid dispute involving 2.77 acres of land is the second longest after the landmark Keshvanand Bharti case in 1973 during which the proceedings for propounding the doctrine of basic structure of the Constitution continued for 68 days.

The Bench, also comprising SA Bobde, DY Chandrachud, Ashok Bhushan  and SA Nazeer, came out with schedules for hearing more than once and the arguments, which were first fixed to be concluded by October 18, was advanced to October 17, but on Wednesday, the apex court decided to wrap up the hearing,  saying “enough is enough”.

The 5-judge Constitution Bench is racing against time since the verdict has to be delivered before Chief Justice of India Ranjan Gogoi demits office on November 17.

It also granted three days to contesting parties to file written notes on “moulding of relief” or narrowing down the issues on which the court is required to adjudicate.

The hearing was marked by heated exchanges between the lawyers of the Hindu and Muslim sides and midway the issue of settling the dispute through mediation once again cropped up.

The first mediation bid failed to find an amicable resolution leading to the commencement of day-to-day hearing from August 6. Later, the panel, which comprised FMI Kallifulla, a former apex court judge, Sri Sri Ravi Shankar, founder of Art of Living Foundation and Sriram Panchu, an acclaimed mediator, was allowed to continue mediation proceedings.

The panel was believed to have submitted its report to the court on Wednesday.

Dhavan, appearing for the Muslim parties, created a flutter after he took strong objection to senior advocate Vikas Singh, appearing for a faction of All India Hindu Mahasabha (AIHM), relying on a site map and books written by foreign and Indian authors to buttress claims that the central dome of the now demolished structure was the birthplace of the deity and asked the bench as to what he should do with it (map).

The bench said he can shred the documents into pieces. Dhavan then tore the pictorial map in the courtroom.

The top court is hearing the Ayodhya case, in which the first lawsuit was filed way back in 1950 by Gopal Singh Visharad, and it has been an unique land dispute where representative lawsuits were allowed to be filed by Hindu and Muslim parties.

A battery of lawyers representing Hindu litigants, including the deity through next friend, a Hindu worshipper and Nirmohi Akhara relied upon arguments which also included the faith and belief “since time immemorial” that Lord Ram took birth under the central dome of the now demolished structure. Babri Masjid was demolished on December 6, 1992 by kar sevaks sparking communal riots that claimed several lives.

Hindu parties, which argued for 17 days at the start of hearing, submitted that as the deity and birth place were the juridical persons, they had the title over the entire 2.77 acre disputed land and any division of property would amount to mutilation of deity itself.

Terming construction of mosque by Babur nearly 433 years ago as a “historical wrong”, Hindu parties led by former Attorney General and senior advocate K Prarasaran and CS Vaidyanathan said this needed to be reparated as Muslims can pray in any mosque in Ayodhya, but for Hindus, this was only birth place of Lord Ram which cannot be altered.  They also relied upon the archeological evidence which had found that there were traces of 12th century temple beneath the disputed structure.

Muslim parties, led by senior advocates Rajeev Dhavan, Shekhar Naphade, Zafaryab Jilani and Meenakshi Arora, vehemently argued that the mosque was built by Mir Baki on a vacant land and Hindus do not

have any right over it, even if it is proved that there existed a temple before the construction of masjid.

The key arguments of Muslim side have been — “once a mosque, always a mosque” — and the dedication of the land as wakf to the almighty was irrevocable and they perfected the title by long use.

Hindu parties relied on archeological evidence and responded to Muslim parties by saying “once a temple, always a temple” and claimed if Muslims have pleaded adverse possession then it squarely amounted to the admission that the temple or the deity was the prior owner.