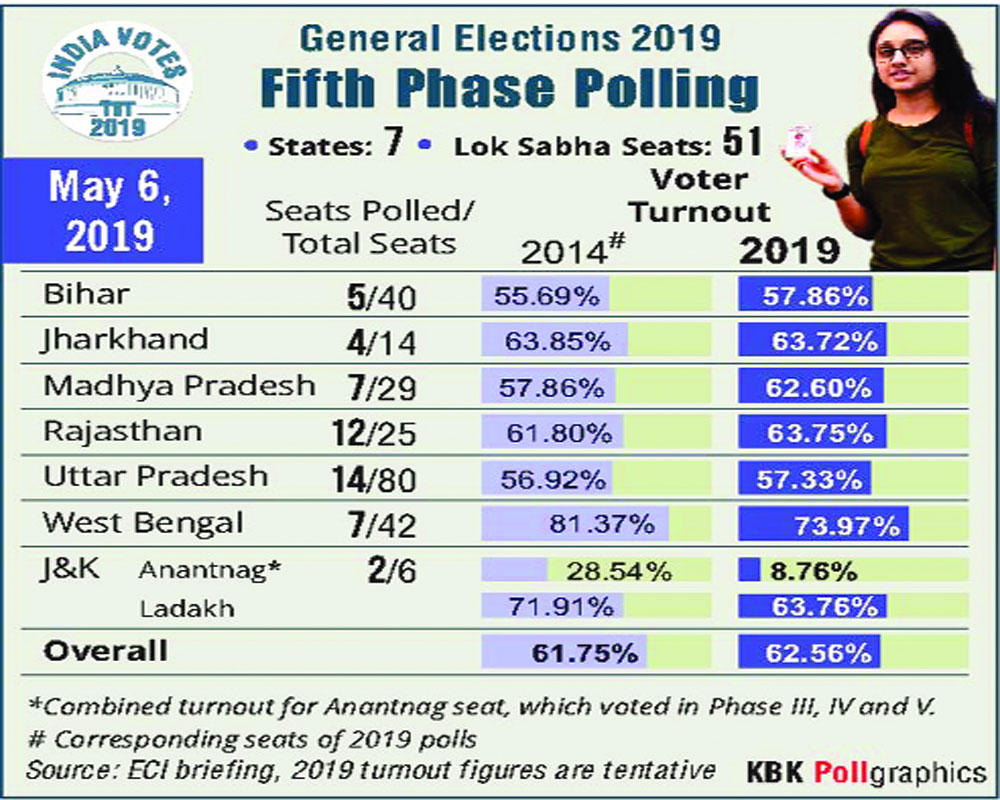 Amid sporadic incidents of violence in West Bengal and a grenade attack in Pulwama, political heavyweights Rajnath Singh, Sonia Gandhi, Rahul Gandhi and Smriti Rani on Monday tested their popularity through ballots in the fifth phase of polling for 51 constituencies in seven States. The polling percentage was a tad dull in this round with 62.87 per cent average turnout across the country in comparison to 65.56 per cent polling in the previous round.

Polling was held in 14 seats in UP, 12 in Rajasthan, 7 each in West Bengal and Madhya Pradesh, 5 in Bihar and 4 in Jharkhand, leaving 158 Lok Sabha seats in the next two rounds on May 12 and May 19.    After this round, 27 seats are left to be decided in the remaining two phases in UP. Prime Minister Narandra Modi’s constituency Varanasi will go to polls on May 19.

The BJP and the SP alleged rigging and booth capturing in Amethi and Kunda seats.

In J&K, polling began on a violent note with terrorists lobbing a grenade on a polling station in Pulwama, but there were no reports of casualty. Polling was held in Pulwama and Shopian of Anantnag Lok Sabha constituency which includes Kulgam.

There are 18 candidates in the fray for Anantnag constituency, including PDP president and former Chief Minister of Jammu & Kashmir, Mehbooba Mufti.

Bengal reported stray incidents of violence in Bangaon, Hooghly and Barrackpore seats, an election official said. The BJP accused Trinamool Congress of rigging the booths and demanded re-polling in Barrackpore and accused the Election Commission of not being effective in ensuring fair polling in the State.

Incidents of clashes between TMC and BJP workers, hurling of bombs, candidate getting hurt due to lathicharge by Central forces, manhandling of a contestant and beating up of a polling agent were reported from seven Lok Sabha constituencies which voted in the 5th round in West Bengal.

A scuffle between Barrackpore seat's BJP candidate Arjun Singh and Central forces was reported when the former TMC MLA tried to enter a booth following allegations that voters were not being allowed to exercise their franchise there, the official said.

Singh, who was allegedly injured during the scuffle, was later seen chasing "fake voters" in Naihati area.

"Our agents were not allowed inside booths. People were not allowed to vote properly and I went there to have a look. I have the right to enter booths but police stopped me and hit me," Singh told PTI.

Alleging that police are not doing anything to stop rigging in some booths of Barrackpore seat, Singh demanded that polling be stopped and re-polling ordered.

Maximum number of "sensitive" booths in Monday's elections was in Barrackpore seat where TMC sitting MP Dinesh Trivedi was pitted against Singh, who switched over to the BJP recently after he was denied a ticket by party supremo Mamata Banerjee.

In Howrah's Balitikuri, TMC candidate and former India footballer Prasun Bandyopdhayay was "manhandled" allegedly by Central forces when he tried to enter a booth there.

Bandyopadhyay said, "I had gone there to see poll proceedings. There was nothing wrong in it. But the Central forces manhandled me for no reasons."             An FIR was lodged in this connection, he said.

Bombings were reported from outside a booth at Hingli in Bangaon constituency following a clash between two groups allegedly owing allegiance to the TMC and the BJP, in which two persons were injured, the official said.

There is also a report that a CPI(M) agent was beaten up and driven out of a booth in Arambagh constituency.

At a booth in Hooghly seat, BJP candidate Locket Chatterjee was seen threatening a polling officer. She is contesting against TMC's two-term MP Ratna De Nag.

In UP Union Home Ministers Rajnath, Smiriti, Sonia, Rahul were in fray.  BJP trusts Irani to give a tough fight to Rahul this time round as the winning margin of the latter had dipped from over three lakh votes in 2009 to over one lakh votes in 2014.

In the Faizabad parliamentary constituency, under which the temple town of Ayodhya falls, sitting BJP MP Lallu Singh is taking on Nirmal Khatri of the Congress. Khatri is a former Uttar Pradesh Congress Committee chief.

In Madhya Pradesh - Tikamgarh, Damoh, Khajuraho, Satna, Rewa, Hoshangabad and Betul - voted. "Minor issues related to EVMs were reported at some places but they were sorted out," officials said.

In Rajasthan and Madhya Pradesh Congress is looking to improve its tally vis-à-vis the BJP as the latter had swept both States in 2014 elections.

In Jharkhand Koderma, Ranchi, Khunti (ST) and Hazaribagh constituencies witnessed voting since early morning to elect their representatives from among 61 contestants.

Barring a few instances of EVM glitches, which were taken care by polling officials, polling has largely been peaceful in five seats, officials said.

-in Jharkhand went to poll with no untoward incident has been reported from any part of the State.