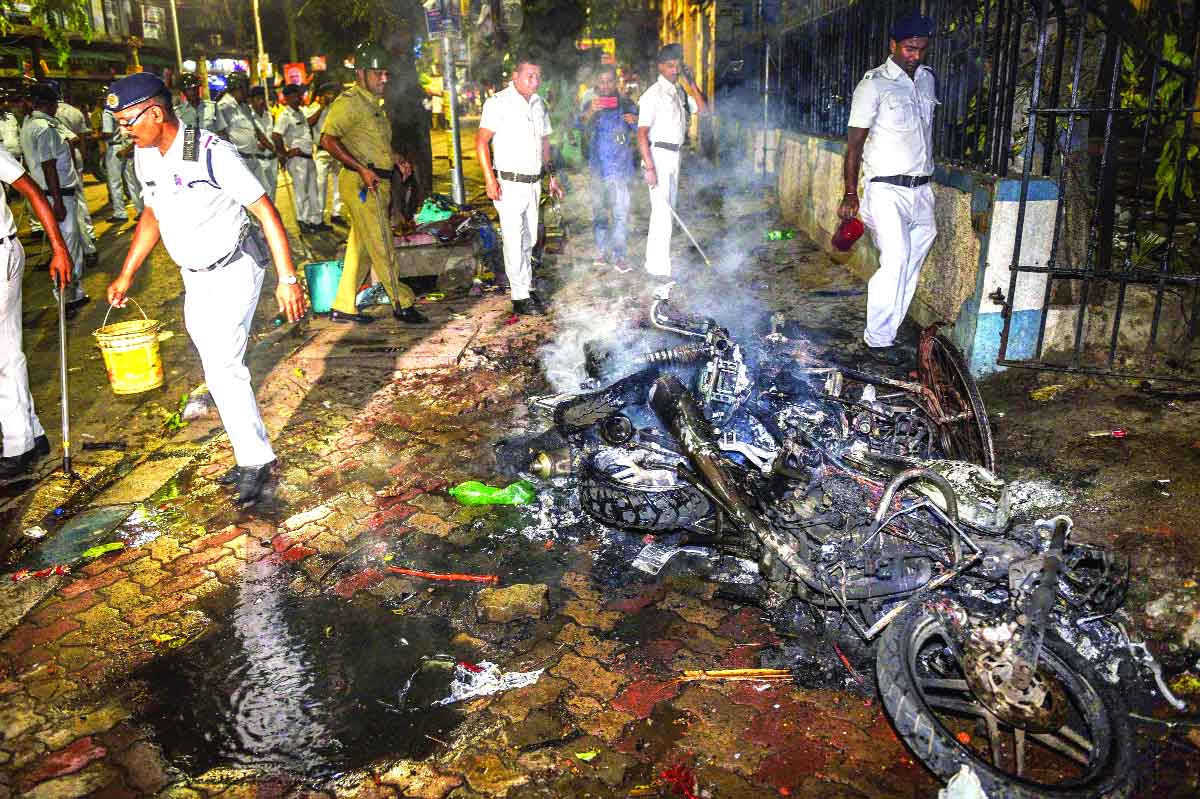 BJP and TMC supporters on Tuesday fought pitched battles on the streets of Kolkata during a massive roadshow by Amit Shah, who was forced to cut short the jamboree and had to be escorted to safety by police.

Violence broke out after Shah’s convoy approached the hostel of Vidyasagar College where he was greeted by stone pelters. Furious BJP supporters retaliated and were seen exchanging blows with their TMC rivals outside the college entrance.

Several motorcycles parked outside the college campus were vandalised and set ablaze. Shards of broken glass littered the lobby of the college where a bust of Ishwar Chandra Vidyasagar, a noted philosopher and a key figure of Bengal Renaissance, was smashed to smithereens. Police were seen trying to douse the fire with buckets filled with water.

Contingents of the Kolkata Police deployed for the roadshow swung into action and were seen chasing away the warring groups. “There was an attempt by TMC hooligans to attack me. Mamata Banerjee tried to provoke violence. But I am safe,” Shah told a Hindi TV news channel. Shah claimed police remained mute spectator as clash erupted .

Shah said he was told by police that the permission for the roadshow ended near the college and that he will be taken to the ancestral home of Swami Vivekananda on Bidhan Sarani.

“They (police) deviated from the planned route and took us away to where there were traffic jams. I was not allowed to reach Swami Vivekananda’s house to pay tributes and I am saddened by it,” Shah claimed.

“If you lay your hands on Vidyasagar, what will I call you other than a goonda,” she told a rally in Behala in the city. “I hate your ideology, I hate your ways,” she said, and announced a protest rally on Thursday against the vandalisation of the bust of Vidyasagar.

Earlier, there was a scuffle when a group shouted slogans against Shah outside the Calcutta University campus and showed him black flags. Police, however, swiftly brought the situation under control.

Before the clashing mobs took over the streets of central Kolkata, Shah led a saffron surge in parts of the city as chants of “Jai Shri Ram” alternated with frenzied chorus of “Modi! Modi!”.

More than 15,000 kg of flower worth Rs 2 lakh, hundreds of vividly dressed artistes from outside Bengal and thousands of “visiting” saffron cadres from neighbouring districts and States joined the North Kolkata locals shouting, “Up! Up! Modi; Down! Down! Didi!” and “Jai Shri Ram!”

Shah clearly wanted to take the electoral battle against the TMC to the Bengal Chief Minister’s own backyard riding a sea of humanity joining his mega six-km roadshow — from Esplanade to Swami Vivekananda’s ancestral house at Simla Street. The final phase of elections to nine constituencies of Kolkata and neighbouring districts will take place on May 17.

Even as artistes — clad as Ram, Hanuman and other gods — and dancers, possibly from Rajasthan and Gujarat, hit the streets performing eye-catching north-Indian ballet, loads of flowers were showered on them from neighbouring houses.

“Look at the flowers falling from above. Do you think they are BJP workers? They are all common people fed up of Mamata Banerjee’s violent raj. This rally heralds the beginning of TMC’s end in Bengal,” claimed Shah.

On whether the BJP too will do the same once it comes to power, he said, “They have killed our 60 supporters in the past several months. Will they kill me also? Let them do that. But we will not do the same. We will restore democracy in Bengal and bring it back to its former glory.”

The BJP would win in upwards of 23 seats, he said.