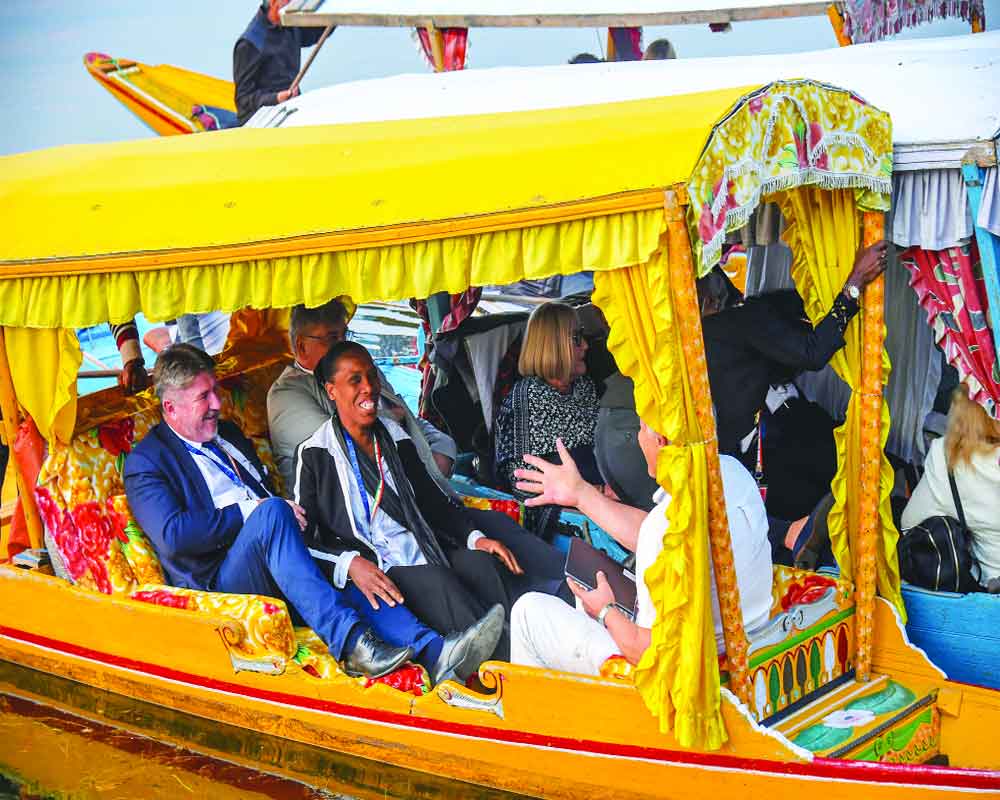 Role of Brussels-based lobbyist in visit stirs up controversy

Amid complete shutdown in Kashmir and incidents of stone-pelting and firing by militants in certain parts of the Valley, the delegation of European Union MPs arrived in Srinagar on Tuesday for a first-hand assessment of the situation in Jammu & Kashmir following the revocation of the State’s special status under Article 370. However, of the 27 MPs originally scheduled to undertake the visit, four backed out and returned to their respective countries.

The role of a Brussels-based woman lobbyist, who is said to have organised the tour, also came to the fore even as the Opposition termed the EU delegation’s visit a “conducted tour” and continued to attack the Government for allowing the foreign delegation to visit the State but barring the country’s politicians.

Reports said Indian-origin businesswoman Madi Sharma was behind the tour and it was her email to British Conservative Party MP Chris Davies that led to the revelation. Sharma in her communication to Davies offered “prestigious VIP meeting” with Prime Minister Narendra Modi and a visit to Kashmir. But Davies’ conditions to meet the local people and Indian press led to his exit from the list of MPs selected by Sharma’s firm WESTT (Women Empowerment Think Tank), which works in association with Delhi-based Women Economic Forum. Sharma was also seen photographed with Prime Minister Modi on Monday along with EU MPs delegation that went to Srinagar.

As members of the delegation drove past heavily-guarded streets of Srinagar, they were greeted with downed shutters, isolated protests and clashes with security forces in some parts of the Valley that left four injured. In another incident, unidentified terrorists attempted to target CRPF personnel deployed at a school in Drabgam area of Pulwama district by firing six-seven rounds on the troops. The school was serving as an examination centre. No one suffered any injury in the attack, police said.

To give the visiting delegation a first-hand account of the prevailing security situation, General Officer in Command of the Srinagar-based 15 Corps Lt Gen KJS Dhillon briefed the EU MPs.

The Opposition, meanwhile, continued to target the Government. In New Delhi, Congress leader Ghulam Nabi Azad said he does not have any objection to the European Union leaders’ delegation visiting Jammu & Kashmir. “What I object to is that the MPs of this country are not being allowed to go to Jammu & Kashmir.”

Congress leader Priyanka Gandhi Vadra said, “Allowing European MPs to travel and intervene in Kashmir while returning Indian MPs and leaders from the airport itself. Such unique nationalism it is.”

Terming the visit of EU MPs to J&K as a “PR exercise”, the National Conference said such “stunts” are not the answer to the situation in the region.

“The visit of the selected EU MPs, largely of a particular ideology, is clearly a PR exercise. It is ironical that European MPs are visiting the Valley when the State’s leaders, including three former Chief Ministers, are incarcerated for nearly three months now, and hundreds of others are in jails across the country,” the NC said in a statement.

The party said the Centre should take “concrete steps” to resolve the issue in the State. “What the people of Kashmir think of the MPs’ visit is very clear from an intensified shutdown in the Valley today,” it said.

The National Panthers Party (NPP) also attacked the Centre, saying an “opportunity was lost” to draw the world attention towards the Jammu region. “An impression is being sought to be created around the world that J&K means Kashmir alone. And this is corroborated by the fact that the Centre has arranged the visit of EU team to Kashmir only,” NPP chairman and former minister Harsh Dev Singh said in Jammu.

Most of the top level and second rung separatist politicians have been taken into preventive custody while mainstream leaders, including two former Chief Ministers --- Omar Abdullah and Mehbooba Mufti --- have been either detained or placed under house arrest. The Government has detained former Chief Minister and sitting Lok Sabha member from Srinagar Farooq Abdullah under the controversial Public Safety act.

The efforts of the State Government to open schools over the past three months have not borne any fruit as parents kept children at home due to apprehension about their safety.

While landline and postpaid mobile phone services have been restored across the Valley, all Internet services continue to remain suspended since August 5.