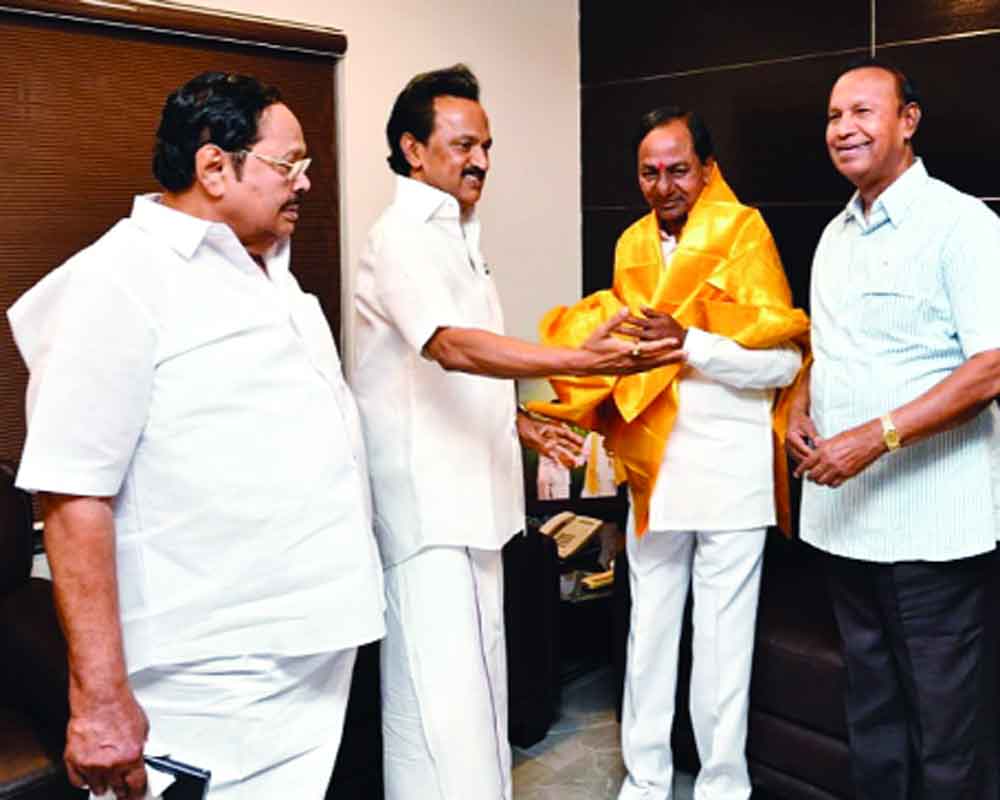 ‘Federal Front ready for Cong support to form Govt but won’t give it driver’s seat, no truck with BJP’

In a dramatic political development, the Telangana Rashtra Samithi (TRS) on Tuesday announced it is open to taking support from the Congress to form a Federal Front Government at the Centre if the latter don’t ask for the driver’s seat. However, the TRS made it clear that it is not going to align in any way with the BJP.

“We are open to talk to them (Congress), and see whether they support us to form a Government. If they do, regional parties are not averse as long as they (Congress) don’t come into the driver’s seat. KCR is very firm that a Federal Front constituent should be in the driver’s seat and run the Government,” TRS spokesman Abid Rasool Khan said on Tuesday.

The development comes a day after TRS chief and Telangana Chief Minister K Chandrasekhar Rao met DMK president MK Stalin in Chennai and sought his support in forging a non-Congress, non-BJP Federal Front. However, according to sources, Stalin rejected KCR’s request to join Federal Front and instead urged him to support the Congress in forming the Government at the Centre.

The new stand of the TRS is seen as a big change in KCR’s attempt to forge a Federal Front minus the Congress and the BJP. KCR has been pursuing his idea of a federal front of non-Congress, non-BJP regional parties for a year.

In case, the front falls short of number to form the Government, the option of the Congress supporting it from outside would be explored, said the TRS spokesman.

“The Government would be of the federal front and the Congress will have to extend support from outside. We are very firm that regional parties should be in the driver’s seat. The Prime Minister’s post should go to one of the constituents of the Federal Front. The Prime Ministerial candidate will be a consensus candidate from among the constituents (of the Federal Front),” Khan said.

However, the proposed Federal Front is not going to align in any way with the BJP, Khan said. “We are averse to the BJP. We do not want to have anything with the BJP, neither to support them or take their support. Most of the constituents speaking with KCR are also of the same opinion that they will not have any truck with the BJP,” he said.

The TRS spokesperson said parties such as SP, BSP, YSRCP, DMK and TRS would do well in the elections, but the Congress would not cross the 100-seat mark. If the Congress does not win 180-200 seats on its own, its allies like the DMK would see “no fun” in being with it and would come to the Federal Front, Khan said.

“JD(S) will have an upper hand in Karnataka. We have started speaking to Communist parties, expecting they will do well in Kerala and some other places,” he said.

Meanwhile, TDP supremo and Andhra Pradesh Chief Minister N Chandrababu Naidu on Monday termed Rahul Gandhi a “good leader who has concerns for the nation” and asserted that unlike 1996, non-BJP parties won’t commit the mistake of keeping the Congress out if such an alliance forms a Government at the Centre.

In an interview to PTI on the sidelines of a poll meeting in East Midnapore district's Haldia in support of TMC candidates, he  claimed the BJP is on its way out

On whether a coalition of regional parties will include the Congress in Government formation or keep it out if such an opportunity arises, he said, “You cannot have such restrictions. You need the magic figure (272 seats) to form the government. Restrictions will ultimately break the unity.”

“All of us will sit together and reach a consensus to build the future of this country,” Naidu said.

The TDP president, who was the convener of the United Front Government from 1996-1998, said that time the experiment failed because the Congress was kept out of the Government.