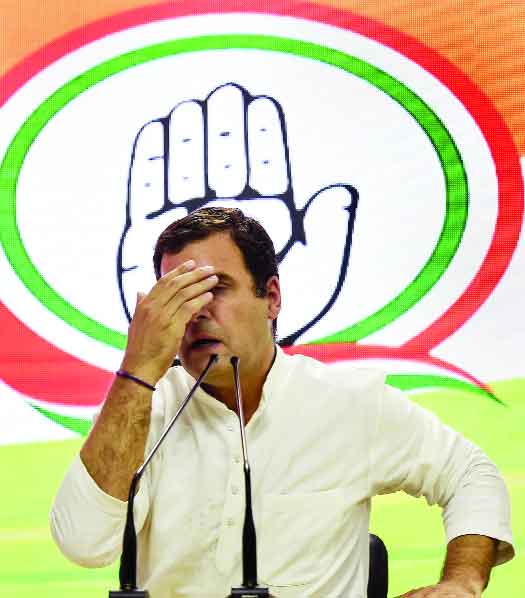 After a humiliating defeat in the Lok Sabha polls, top Congress leaders will deliberate on party losses at a meeting of the working committee slated on Saturday in which party chief Rahul Gandhi is likely to offer his resignation. Murmurs have already started within the party over taking responsibility for the poor performance of the Congress across the country, with some of its leaders already sending in their resignations.

Uttar Pradesh Congress chief Raj Babbar and Odisha Congress president Niranjan Patnaik announced their resignations from the post in the wake of the party’s electoral debacle in their respective States. The party has convened a meeting of the Congress Working Committee, its highest decision-making body, on Saturday, where, according to sources, Rahul is likely to offer his resignation at the meet.

The top Congress leadership will deliberate on the reasons for the loss. The party suffered a devastating defeat for the second time in a row at the hands of the Narendra Modi- led BJP. It bagged only 52 seats in this election.

A senior party leader said the CWC will introspect the reasons as to how the Congress gave a strong performance in Assembly polls in major States such as Gujarat, Karnataka, Rajasthan, Madhya Pradesh and Chhattisgarh during the past two years, but failed to keep the momentum and capitalise on people’s disaffection towards the BJP for a good showing in the general election.

During 2018 Assembly elections of Karnataka, the Congress and the JD(S) combine were able to win 78 and 37 seats, respectively, while the BJP got 104 seats.

Babbar — who lost Fatehpur Sikri BJP’s Rajkumar Chahar by a margin of 4,95,065 votes — sent his resignation from to Rahul. “The results are depressing in UP. I find myself guilty of not discharging my responsibility in a proper manner,” Babbar said.

Odisha Pradesh Congress Committee (OPCC) president Niranjan Patnaik said, “I have sent my resignation to AICC president (Rahul) owning moral responsibility for the party’s poor show in both Lok Sabha and Assembly polls in the State.”

Patnaik said the party needs to take concrete steps to set the organisation in proper shape by getting rid of opportunists and attracting youths into its fold. The Congress won only one Lok Sabha seat and nine Assembly seats in Odisha. There are also reports that Karnataka H K Patil, who was tasked to oversee the Karnataka Congress campaign in December, has quit taking moral responsibility.

Chief Minister Kamal Nath said the Congress will review the reasons of its rout in the State. Of the 29 seats in the Congress-ruled State, the BJP has won 25 and is leading on three seat, while the Congress managed to win only one seat, Chhindwara. Nath’s son Nakul Nath won from the family bastion.

In a statement, Nath said, “It is true that the results are not as per our expectations but we accept the mandate and respect it....We will review it. Former Chief Minister Digvijay Singh, who was defeated by the BJP’s Pragya Singh Thakur in Bhopal Lok Sabha seat, said he accepted the verdict with humility.

Senior Congress leader Jyotiraditya Scindia, who lost in his traditional Guna seat to the BJP’s Dr K P Yadav, said he will continue to work for the people.