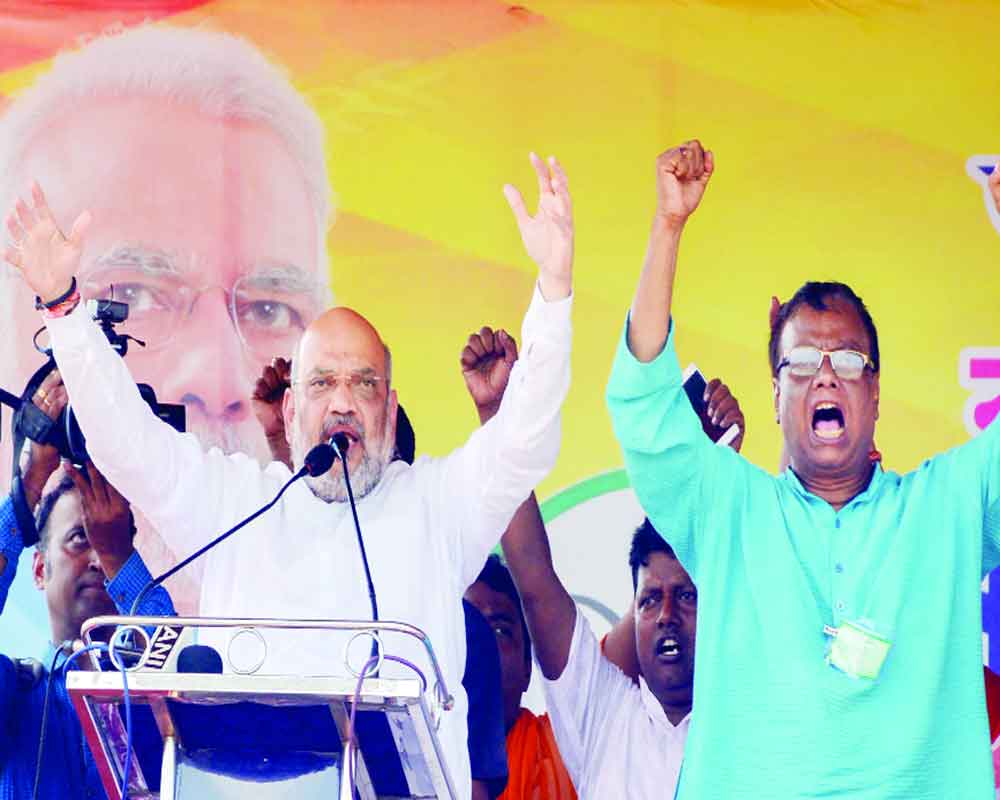 Hours after BJP president Amit Shah’s helicopter was denied permission by the West Bengal Police to land at Baruipur under Jadavpur constituency for an election rally, he attacked Chief Minister Mamata Banerjee for “damaging all the democratic institutions and norms in the State.”

Shah alleged, “A Bengal that was once a sonar Bangla (golden Bengal) has been reduced to a Kangal Bangla (destitute Bengal).”

The BJP alleged that the Chief Minister has replaced democracy with her “dictatorship” after the State administration denied permission to a rally by Shah.

Mamata immediately hit back, “The way he (Shah) is insulting Bengal and its people will not go unpunished. Uneducated people like these (Shah) who have no idea of Bengal and its culture are today coming to this State to insult the Bengali people.”

Rejecting Shah’s allegation of denial of permission to his chopper to land, the State administration claimed the Government had nothing to do with the denial of the permission as the chopper was supposed to land on a private land and that “the land owner refused to give permission in the final run”.

The incident sparked near-communal tension in the area with the BJP and TMC supporters resorting to fisticuffs prompting a mild lathi-charge by police, sources said.

Soon after a political slugfest began between the two sides, the Chief Minister called the BJP a “party of rioters and goondas who were distributing cash looted during the demonetisation” during elections in Bengal. “But they will not be able to win the elections as the people will not give them a single vote here,” Mamata said.

Shah, who subsequently held a rally at Joynagar also in South 24 Parganas, attacked the TMC chief. “She is arresting the people and stopping them from chanting the name of Lord Ram. But here I dare her to arrest me as I am also chanting ‘Jai Shri Ram,” Shah said.

The BJP president said, “The Mamata Banerjee Government is visibly perplexed. She wants to stop me from attending rallies. The TMC can stop me from addressing rallies, but can’t stop the victory march of the BJP in Bengal.”

Addressing an election rally in Canning, Shah targeted Mamata, saying, “We will restore the glory of Bengal. Mamata Banerjee has turned ‘sonar’ (golden) Bangla into ‘kangal’ (pauper) Bangla. She is only interested in protecting infiltrators to secure her vote bank. But her vote bank won’t be able to save her from imminent defeat.”

In a sharp retort to Shah, O’Brien said in a tweet, “That puke-worthy Shah had the audacity to use the term ‘Kangal Bangla’ today at a rally. The people of Bengal will give him and Modi a fitting reply in Phase 7. That #LowLife insults Bengal.”

Meanwhile, BJP leader and Union Minister Prakash Javadekar  urged the Election Commission to take cognizance of the development, saying the West Bengal Government wants to to reduce the poll panel to a mute spectator.

“This is murder of democracy. The EC should take cognizance of the matter. If important leaders are not allowed to hold rallies in the State, then what is the meaning of elections,” Javadekar said.

The Union Minister said the West Bengal administration has been denying permission to Shah’s poll programmes and events of other important BJP leaders.

Mamata’s dictatorship is on full play in the State, he said, criticising the Chief Minister. Javadekar asserted that the denial of permission to the BJP chief’s helicopter reflected Mamata’s frustration over the growing support for the BJP, as people who had elected her are determined to defeat her.

In the seventh and last phase of election on May 19, polling will be held in nine parliamentary constituencies in West Bengal.

The person, along with another person, reportedly confessed before the GRP that the cash was being brought for “electoral purposes.” Both of them had traveled to Bengal from Delhi.

While the twosome were remanded in a three-day police custody, Ghosh refused to comment saying he would take information about the matter, conceding however that the man arrested was once his personal assistant.