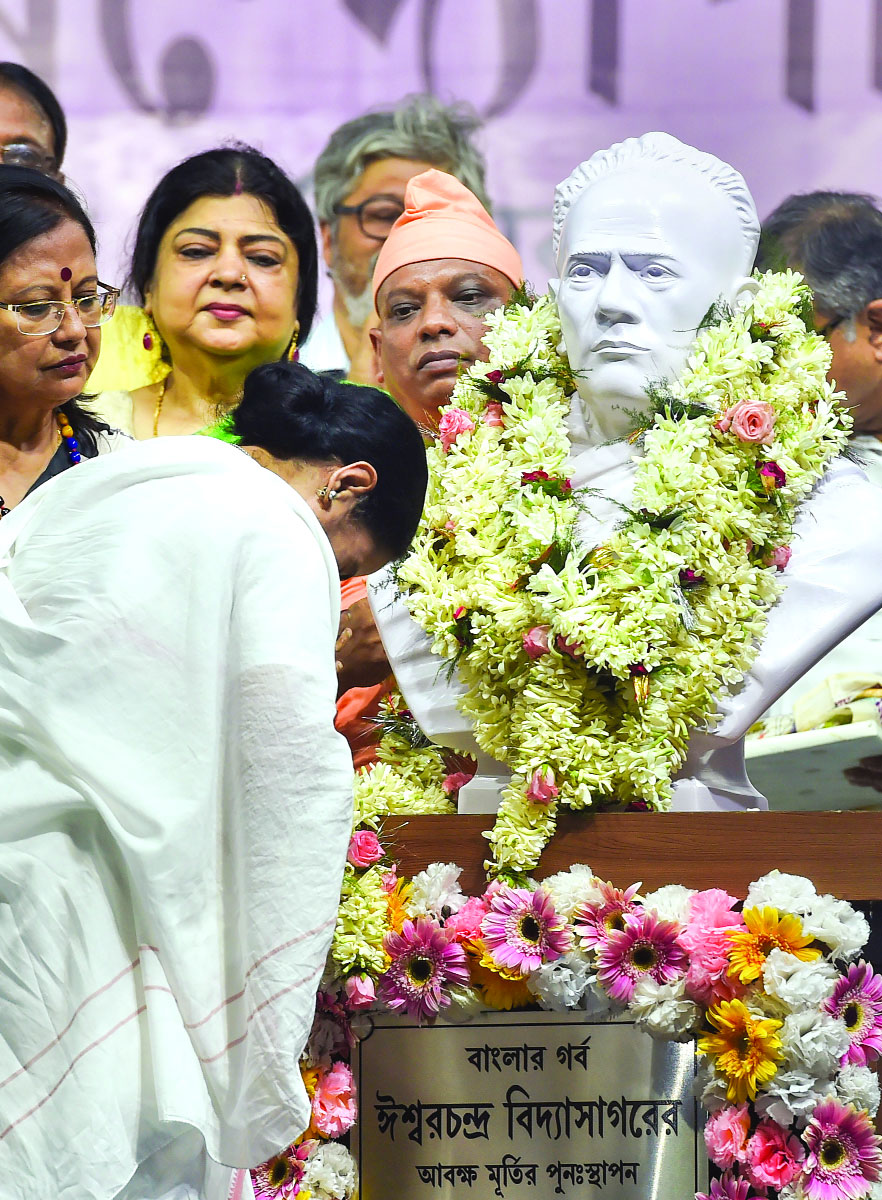 Post poll violence claimed more lives in West Bengal as Chief Minister Mamata Banerjee on Tuesday installed a new bust of the Renaissance icon Ishwar Chandra Vidyasagar and warned the Centre against any attempt to impose President Rule in the State. The bust was allegedly pulled down by BJP workers during a party roadshow during the Lok Sabha elections.

“If you talk about such steps being taken (read imposition of Article 356) then I must say it will not be that easy. We are not sitting here wearing bangles. There will be consequences,” she said.

She said the BJP is trying to spread violence and create communal tension through disinformation campaign by spending crores of rupees.

“They are doing this to Bengal also. But they will not succeed here,” said the Trinamool Congress chief.

Attacking the BJP for showing political intolerance and linking it to the vandalisation of Vidyasagar’s bust Mamata said, “They are so intolerant that they are into breaking statues of all the national and international icons. They have not spared the statues of Karl Marx, Lenin in Tripura, BR Ambedkar in UP and now they have done it to Vidyasagar here.

Wondering why the Centre was trying to impose Hindi at the cost of the regional languages, she said, “It is our India where every State has its own heritage and language. BJP should not decide the fate of the States.”

“They have destroyed the institutions and controlling them according to their own whims and fancies,” she said adding “they are not even sparing the regional culture and heritage. Every State has its own history, culture, food-style and dresses. That is the beauty of this vast country. But they are trying to impose their will on that freedom too. Is that they will tell the whole Tamil Nadu that they will have to learn Hindi and ask people to take course in Hindi.”

Meanwhile, post-poll violence continued in Bengal with three more deaths being reported from Bhatpara and Burdwan even as the locals fished out bags crammed with flesh from Ichamati River near Baduria off Basirhat.

The suspense around the bags increased following claims by the BJP that three of their supporters were still missing from Najat village in Basirhat sub-division where BJP and TMC supporters clashed on Saturday evening leading to three deaths.

“The police are investigating the matter and the bags are being sent for forensic examination,” a senior police officer said after senior TMC leader Mukul Roy demanded thorough investigation by the National Investigation Agency “as this is an area bordering Bangladesh and there is every possibility that a Nadigram-like situation is enfolding in the region.”

Violence also continued at Bhatpara in North 24 Parganas where two TMC supporters died after allegedly being attacked with bombs, sources said adding another TMC man succumbed to an attack at Galsi in neighbouring Burdwan district.

The incidents took place on Monday night when Md Halim and Md Mustaq of Bhatpara were attacked by the assailants. Four other men were also injured in the attack. With the latest murders the death toll in ongoing political violence mounted to 10 in the past four days, sources said.