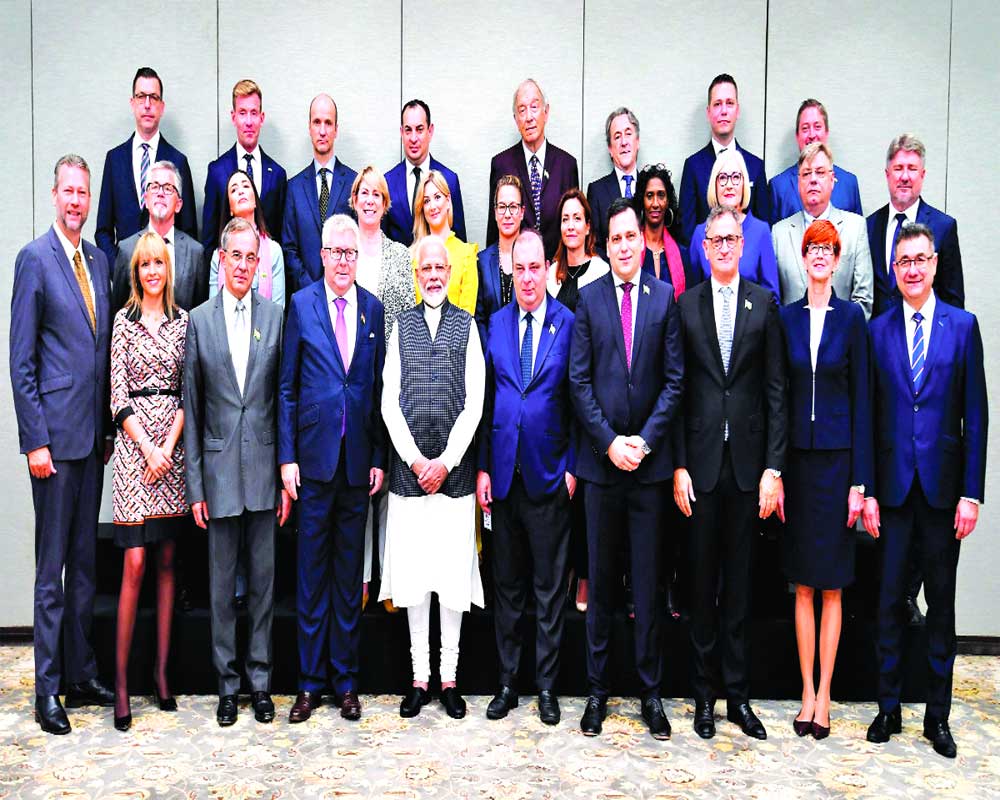 Trip will give clear view of governance priorities, cultural and religious diversity of regions: PM

A high-powered 28-member European Union (EU) parliamentarians’ delegation will undertake a two-day visit to Jammu & Kashmir, starting Tuesday, in what will be the first visit by a foreign group to the State since the abrogation of Article 370 on August 5.

Addressing them, Prime Minister Narendra Modi on Monday outlined the need for urgent action against those supporting and sponsoring terrorism, without naming Pakistan.

While Modi said the EU delegation’s visit to Jammu & Kashmir on Tuesday should give them a better understanding of the cultural and religious diversity of the regions of Jammu, Kashmir and Ladakh, it assumes significance against the backdrop of human rights concerns being voiced by certain national and international sections, including US Congress, and also as it comes just a couple of days before J&K and Ladakh become two Union Territories on October 31.

The PM further hoped that the visit will give them a clear view of the development and governance priorities of the region, a statement issued by the PMO said.

National Security Adviser (NSA) Ajit Doval also briefed the visiting lawmakers on the situation in Jammu & Kashmir and terrorism emanating from across the border, sources said. He said terrorists were trying to disrupt of normalcy by targeting civilians.

The NSA informed them that the State Government had made all efforts to restore normal functioning of economy and educational institutions.

Moreover, there are no restrictions on movement and 100 per cent landlines and mobile services are now functional, said Doval, adding there is no shortage of essential supplies and all hospitals are functional.  He also highlighted the false propaganda launched by Pakistan about the plight of common people of the State, sources said.

Pakistan has launched an all-out campaign at various international fora, including the United Nations, criticising India.

The all-powerful Pakistan Army has stepped up firing on the Indian Army positions at the Line of Control (LoC) since August 5.

More than 850 ceasefire violations have taken place so far since then taking the overall tally for such violations from January till now to over 2,450, the highest ever in the last five years.

The EU delegation tour also comes days after a group of US lawmakers in a US Congressional meeting in Washington expressed concern about the situation in Jammu & Kashmir.

India rejected the concerns and said the questioning by the US was a reflection of lack of understanding about robust functioning of democratic institutions in India.

New Delhi also said it was regrettable that a few US lawmakers used a Congressional hearing to question measures to protect lives of people in Jammu & Kashmir.

The Indian Government remains responsive to safety and well-being of people in Jammu & Kashmir, said MEA spokesperson Raveesh Kumar adding, “We are regularly updating the US Government about situation in Kashmir.”

This assertion came after some US lawmakers during the Congressional hearing on ‘Human Rights in South Asia: Views from the State Department and the Region,’ had expressed concern over the restrictions on movement and communications in Jammu & Kashmir.

In his interaction with the EU group, Modi told them that close international cooperation is essential to fight terror and urgent action is needed against those supporting and sponsoring terrorism.

The PM, who asserted that there should be “zero tolerance” for terrorism, said the visit to Jammu & Kashmir should give the MPs a better understanding of the cultural and religious diversity of the regions of Jammu, Kashmir and Ladakh, according to a statement by the Prime Minister’s Office.

Without naming any country, Modi said terrorism and radicalisation particularly threaten democratic societies like India and Europe. “Close international cooperation is essential to fight terrorism.  Urgent action must be taken against all those who support or sponsor terrorism or support such activities and organisations or use terrorism as a state policy. There should be zero tolerance for terrorism,” he said.

Pointing out that the EU is India’s largest trade partner and source of foreign direct investment, Modi said the early conclusion of a fair and balanced Broad-based Trade and Investment Agreement (BTIA) is a priority for his Government.

The PM also highlighted the jump in India’s position in Ease of Doing Business rankings from 142 in 2014 to 63 now. “This is a massive achievement for a country of such enormous size, demography and diversity. Governance systems are today enabling people to move in an aspirational direction,” he said.

Modi also underlined the focus of the Government on ensuring Ease of Living for all Indians.  He mentioned the success of key Government programmes such as Swachh Bharat and Ayushman Bharat.  The PM also reiterated India’s commitment to eliminate tuberculosis by 2025, five years before the global target. He also talked about steps taken for environment protection and conservation, including enhanced renewable energy targets and movement against single-use plastics.

The PM appreciated the importance the parliamentarians attach to their relationship with India by visiting the country at the beginning of their term. The delegation later called on Vice President M Venkaiah Naidu.