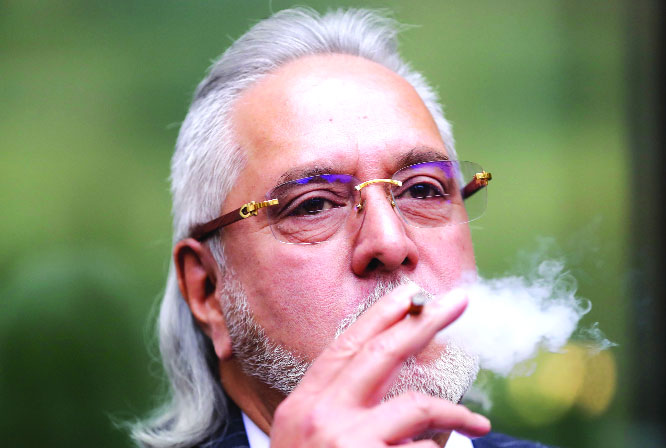 Absconding liquor baron Vijay Mallya on Saturday became the first person to be charged under the Fugitive Economic Offenders Act (FEOA), 2018, as a special Prevention of Money Laundering Act (PMLA) court declared him as a “fugitive economic offender” under the new anti-fraud law.

In a significant development that came on the heels of the Westminster Magistrates Court in London ordering Mallya’s extradition to India, the special PMLA court declared him a “fugitive economic offender” under the Fugitive Economic Offenders Act, 2018, a law that provides for confiscation of all his properties.

Though the two proceedings are independent of each other, the authorities expect that the declaration of Mallya as a “fugitive economic offender” will come in handy to press for his early extradition from the UK, where the absconding businessman is appealing against the extradition order passed by Westminster Magistrates’ Court Chief Magistrate Emma Arbuthnot on December 10, 2018.

In its plea filed before the Special PMLA court on June 22 last year, the Enforcement Directorate (ED) had urged the court to declare Mallya as “fugitive economic offender” and allow it to confiscate all his properties, estimated to be around Rs 12,500-crore, making it the first such case of its kind registered under the new FEOA law.

Even in the past, he had failed to honour the court summons and also other notices, summons and arrest warrants issued by the ED for questioning in the loan default and money laundering scams.

Mallya had quietly left the country for the United Kingdom on March 2, 2016, amid reports about his airline having defaulted on repayment of nearly Rs 9,000 crore to the banks. He has been evading summons from various courts since then.

Mallya is facing the investigations by the ED and CBI for defaulting on repayment of loans of Rs 900 crore taken from IDBI and also defaulting on payments to the tune of Rs.8,191 crore that he and his companies owe to various Indian banks.

On its part, the ED - which did not earlier succeed in forcing Mallya to appear before different courts in connection with the money laundering case - has so far attached properties worth over Rs 9,000 crore belonging to the businessman under the PMLA.

On June 14, 2016, the PMLA court had declared Mallya a “proclaimed offender” in the IDBI loan fraud-cum-money laundering case.

The Special court issued non-bailable warrants against Mallya on November 19, 2016 and July 5, 2017. The Fugitive Economic Offenders Act, under which Mallya has been declared as a “fugitive economic offender”, came into existence on April 21, 2018.

The court had earlier declared Mallya a “proclaimed offender” under section 82 of the Criminal Procedure Code (CrPC), which makes it mandatory on the offender to appear before the ED within 30 days of the publication of proclamation.

However, with Mallya having failed to comply with the proceedings launched under section 82 of Cr.PC, the ED had invoked section 83 of Cr.PC and moved the PMLA court to seek an order from it to attach any property, both movable and immovable, belonging to absconding industrialist against whom several arrest warrants were pending.

The ED had in June 2016 attached United Breweries Holding Ltd (UBHL) and Mallya assets worth Rs 1,411 crore in cities like Mumbai, Bangalore, Coorg and Chennai, in connection with its money laundering case.

On May 18, 2017, the ED took possession of a Rs 100 crore worth seafront farmhouse of the fugitive businessman at Alibaug in Raigad district in Maharashtra’s coastal Konkan region.

Late last year, Indian government had launched extradition proceedings against Mallya which he had contested.

In its verdict given on December 10 last year, Westminster Magistrates’ Court Chief Magistrate Emma Arbuthnot ordered that Mallya  be extradited to India, and referred the case to British Home Secretary Sajid Javid for signing the extradition order.

Among other things, the Chief Magistrate noted in the order that it was not a politically motivated trial and there was no evidence that Mallya’s extradition was being sought for extraneous considerations. The Court said it was satisfied with the assurances and materials provided by the Indian government regarding prison and human rights conditions and ruled that the video of Arthur Road Jail, Barrack No 12 accurately portrayed adequately large space, high ceilings, fans, natural light, etc.

Apart from making a positive mention about the impartiality and independence of Indian Courts, Judge Arbuthnot pronounced that she was making a recommendation to the UK Home Secretary to make a decision on ordering Mallya’s extradition to India.

It may be recalled that Mallya was arrested by the UK Metropolitan Police extradition unit April 18, 2017 nearly ten and a half months he left India for the United Kingdom. During the course of his trial, Mallya was on bail.