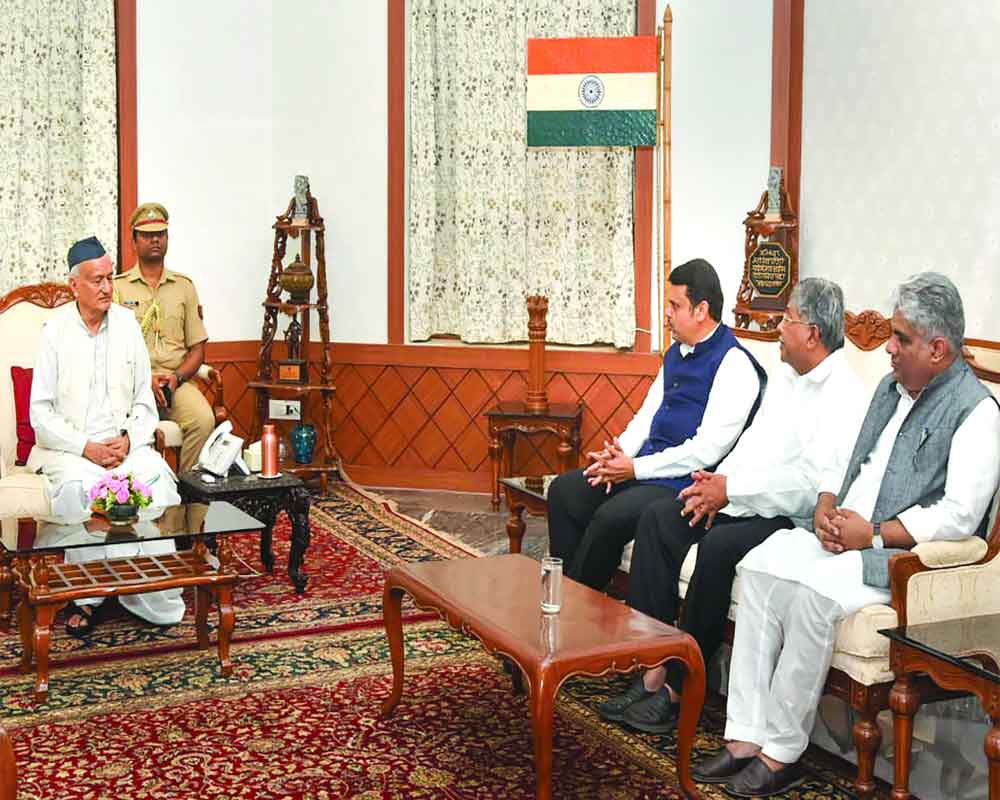 Close on the heels of the BJP expressing its inability to form a Government in Maharashtra, Governor Bhagat Singh Koshyari on Sunday night invited Shiv Sena’s Eknath Shinde, the leader of the second single-largest party, to indicate its “willingness and ability” to form the next Government in the State.

NCP chief spokesperson Nawab Malik told reporters on Sunday evening, “Shiv Sena needs to first exit from the NDA as it has one Cabinet post (in the Narendra Modi Government). Unless it leaves the NDA, we will wait and watch the developments.”

Malik said, “We have not yet come to know of a formal decision by the Congress (on the Government formation issue). Our president Sharad Pawar has said the NCP and Congress will take a combined decision in the matter. The Congress MLAs will convey their mood to their party leaders who will in turn discuss with their Central party high command. Similarly there will be discussions in our party. The Central leaders of the two parties will take a final decision in the matter”.

Congress general secretary Mallikarjun Kharge on Sunday met the party’s newly elected MLAs from Maharashtra, who are staying at a resort in Jaipur, to discuss the political situation in the State while Pawar met some of his party leaders in Mumbai. Later talking to reporters in Jaipur, Kharge reiterated his party’s stand of sitting in the Opposition in Maharashtra, while Pawar said he would react only to an official statement from the Sonia Gandhi-led party.

In a day of dramatic developments, the BJP leaders had earlier in the evening called on the Governor and conveyed their party’s inability to form a Government after the Sena refused to extend its support to its senior ally over the contentious issue of rotational Chief Ministership.

The party took the decision after its core group members held two rounds of discussions and also confabulated with party’s national president Amit Shah on the party’s inability to form a Government without the Sena’s support.

Shah, through video-conferencing from the national Capital, is understood to have advised the State BJP leaders against accepting the invite for forming the Government at a time when it is 25 MLAs short of a simple majority of 145 MLAs in the 288-member State Assembly. The BJP’s experience of Karnataka on May 19, 2018 when BS Yediyurappa resigned as the Chief Minister without facing a trust vote must have been on Shah’s mind when he asked the State BJP party leaders not to have a go at the formation of the Government.

Earlier in the afternoon, Shiv Sena chief Uddhav Thackeray in a meeting with the newly elected Sena MLAs, who have been lodged at Hotel Retreat at Madh Island in north Mumbai, expressed confidence that come what may, his party would install its Government. He had also told his party legislators that the Sena would not compromise with the BJP on its core objective of installing its man as the next Chief Minister of Maharashtra.

While Uddhav held meetings with senior party leaders, Pawar talked with his party colleagues at his “Silver Oak” residence all through the day. In Jaipur where newly elected Congress MLAs are putting up, senior party leaders, including Kharge, former Chief Ministers Sushil Kumar Shinde, Prithiviraj Chavan and Ashok Chavan, deliberated on issues relating to the party extending their support to the Sena.

Now that the ball is in the court of the Sena, which has a strength of 56 MLAs and claims that it enjoys the support of another eight MLAs, to form a Government, it would have to make all-out efforts to reach out to both the NCP and the Congress, which together have a strength of 98 MLAs and claim to enjoy support of at least another 10 Independent and smaller party MLAs.

Though Sena spokesperson Sanjay Raut has been meeting Pawar on a regular basis in recent times, the Sena had not made the first approach to either the NCP or the Congress till late on Sunday night to seek support to form the next Government.

Though Pawar has been maintaining that the NCP-Congress alliance was prepared to sit in the Opposition based on the mandate the two parties had received in the Assembly polls, his party formally indicated that it would not be averse to extending its support to the Shiv Sena on certain conditions.

There will be a full-fledged discussion on the power-sharing arrangement among the three parties. While it is certain that the Shiv Sena’s man will be the next Chief Minister of Maharashtra, it remains to be seen if there will be two deputy Chief Ministers - one from the NCP and another from the NCP, in the beginning. It also remains to be seen if the NCP and Congress will also demand sharing of the Chief Minister’s post with the Shiv Sena on a rotational basis, as the latter did with the BJP.

Being past masters in power sharing, the NCP and Congress leaders will definitely demand their pound of flesh before agreeing to join the Shiv Sena-led Government.

“Apart from the sharing Chief Minister’s post on rotation, the two parties will definitely demand key portfolios in the new Government,” a senior NCP leader said.

Though it was initially considering the idea of supporting the Shiv Sena from outside, there appears be some reconsideration in its stand. “It is good if we are in the Government. Being in the Government will help us rebuild the party set up across the State,” a senior Congress leader said.

Interestingly, the BJP is the biggest loser in the fortnight-long drama witnessed in Maharashtra, where its longest Shiv Sena not only called its senior ally’s bluff and sent out clear message to the Amit Shah-led party that it can no longer bulldoze its allies and get away as it had done with its allies in other States.

Its failure to form a Government in big State like Maharashtra is also a very setback for the BJP which has been expanding its base across the country ever since the Narendra Modi-led BJP rode to power at the Centre in 2014.

Earlier, talking to mediapersons after second round of deliberations the Chief Minister’s official residence “Varsha”, a BJP delegation, led by caretaker Chief Minister Devendra Fadnavis and State party president Chandrakant Patil met the Governor and conveyed its inability to form a Government in the State.

Taking sarcastic dig at the Shiv Sena, the State president said: “If the Shiv Sena wants to form a Government in alliance with the Congress and NCP after disregarding and insulting the mandate, it can do so. We wish them well”.