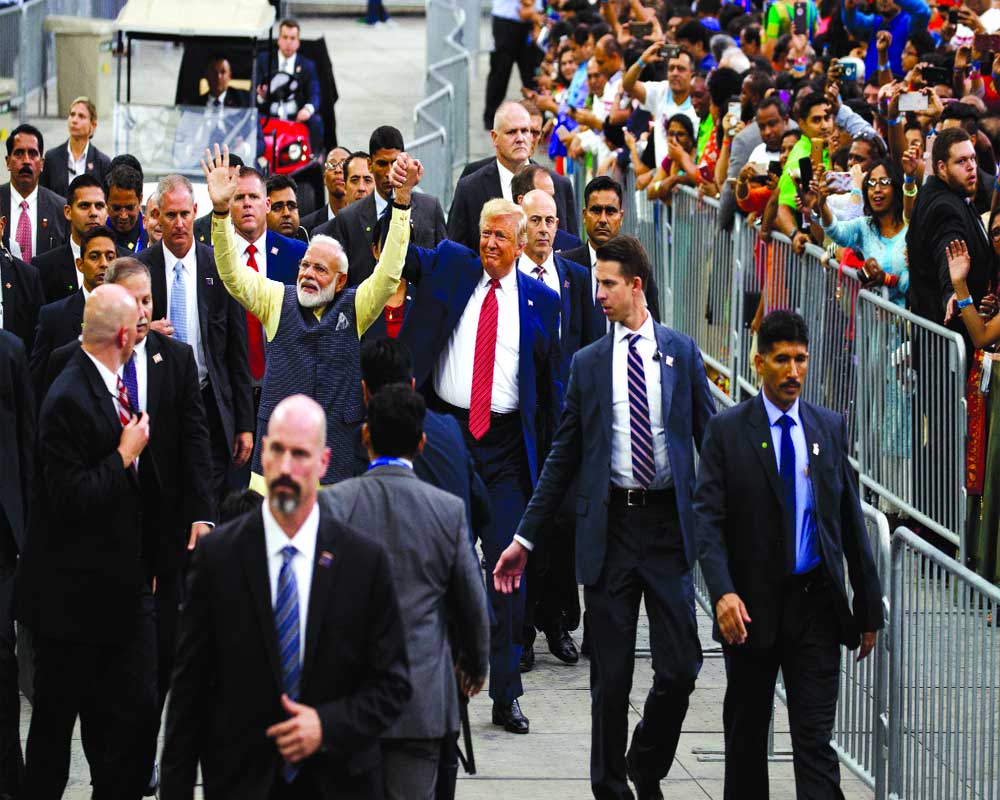 Prime Minister Narendra Modi was accorded a rousing welcome on Sunday when he arrived at the crowded NRG stadium on Sunday to address the Indian-American community with people chanting “Howdy, Modi.”

Addressing over 50,000 Indian-Americans at the NRG stadium, Modi said it was honour and privilege for him to welcome Trump in this magnificent stadium and magnificent gathering.

Modi drew a parallel between the 9/11 and 26/11 terror attacks, saying time has come for a “decisive fight” against those who promote and support terrorism, in a veiled attack on Pakistan which is accused of harbouring terror groups. “Whether it is 9/11 in US or 26/11 in Mumbai, where are these people coming from?” Modi asked while addressing the record crowd in the presence of Trump.

In an apparent reference to Pakistan, Modi said the people who cannot even manage their own country are harbouring terrorism and supporting terrorism. “The entire world knows about this,” he added.

Modi said India has given farewell to Article 370, which allowed terrorism and separatism to rear its head in Jammu & Kashmir.

Modi introduced Trump to the crowd and said, “Greetings to my fellow Indians in India and around the world. Friends, this morning, we have a very special person with us.”

“He (Trump) was a household name even before he went to hold the highest seat in he US,” Modi said while greeting the US president. “President this morning in Houston, you can hear the heartbeat of this great partnership in this celebration of the world’s two largest democracies. You can feel the strength and depth of the bonds between our two nations,” Modi said.

Trump has already made the American economy strong again, Modi said. “He has achieved much for the US and for the world,” Modi said. “We in India have connected well to him,” he said, adding “Abki baar Trump Sarkar”.

It is for the first time that Trump and Modi shared a stage together and address a record crowd of Indian-Americans. Trump vowed to protect innocent civilians from the threat of radical Islamic terrorism and said border security is vital to both America and India as he emphasised on bolstering further the Indo-US security relationship.

Trump said the countries will soon sign several defence deals to bolster their relationship. “We are committed to protect innocent civilians from the threat of radical Islamic terrorism,” the US President said.

The US President greeted ‘Happy Birthday’ to Modi who turned 69 last week. He praised Modi for doing “exceptional job” in India and said over 60 million people participated in the General polls in India and voted “overwhelmingly” for him.  Trump said if he is elected, India will have a “true friend” in the White house. He said “India can never have a better friend” than Trump.

Welcoming Modi, Houston Mayor Sylvester Turner highlighted the significance of the event and said Indians have been a key figure in the development of his city.

Turner told the crowd that Houston is the most diverse city in the county. “In Houston, we say howdy in more than 140 languages,” Turner said, “and this morning we are saying howdy to Modi!”

After welcoming Modi at the event, Turner presented him the keys to the Houston City, which has one of the largest concentration of the Indian-American community in the US. About two dozen governors and members of the US Congress are also attending the event.

Democrat Steny Hoyer welcomed Modi and invoked Mahatma Gandhi and former Prime Minister Jawaharlal Nehru in his speech. He said both Indians and Americans have the same purpose, growing the partnership between the two countries.

Organised by the non-profit Texas India Forum, the event, with the tagline ‘Shared Dreams, Bright Futures’, showcased tremendous contribution of Indo-Americans in United States and the strong and lasting partnership between the US and India.

Ahead of Modi’s address, Indian-American artists from Texas and elsewhere performed cultural programmes.

Dallas-based Ashok Mago said ‘Howdy, Modi’ is an opportunity for the two leaders to showcase to the world the shared values and principles of the two largest democratic countries of the world.

“This meeting has great significance,” Mago said. “It (Howdy Modi) shows that President Trump wants the US-India relationship strong and is committed to this. I do not think that Trump has shared a dais with a visiting foreign leader like this,” said Dallas-based Mago.

An eminent Indian American, who has played a key role in strengthening India US relationship, Mago was one four Indian-Americans who were invited by the White House to meet the president on his arrival at the Joint Reserve Base.

Accompanying Mago to the air force base, Piyush Patel said this was a dream come true. “For me this mega event will take India-US relationship goes to a whole new level,” he said.