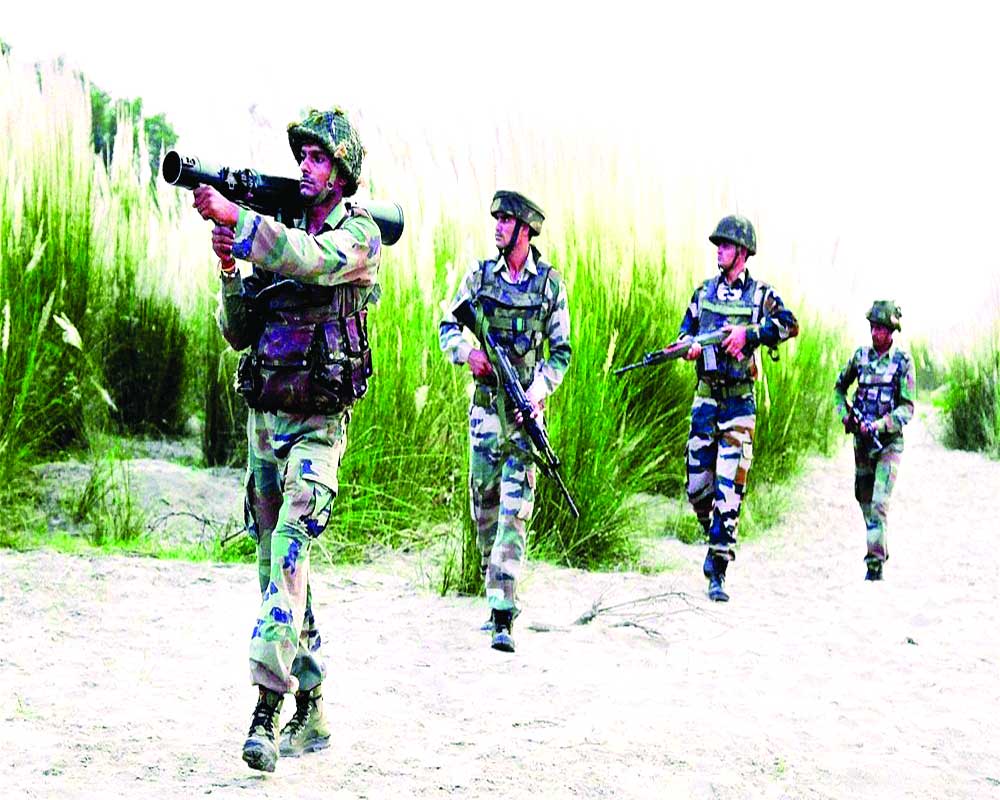 The Indian Army on Sunday carried out punitive strikes on Pakistani Army posts across the Line of Control (LoC) after two Indian soldiers and a civilian were killed in Tangdhar when Pakistan violated ceasefire and tried to push in terrorists from across the LoC.

Army Chief General Bipin Rawat said around six to ten Pakistani soldiers and as many terrorists have been killed in the action.

Firing from across the LoC began in early hours when the Pakistan Army tried to push in terrorists into Jammu & Kashmir by giving them covering fire. Two Indian soldiers and a civilian were killed in the Pakistan firing. The Indian Army then hit terrorist launch pads and Pakistani Army positions, Army officials said later here in the day.

They said the Indian Army had to resort to punitive action after Pakistan resorted to heavy “unprovoked firing on civilians” on Saturday night.

“As a result, calibrated escalation of area weapons was undertaken by the Indian side in which terrorist launch pads, Pakistan Army posts giving protection to these launch pads and certain gun positions were hit,” an Army spokesperson said.

The action was taken against Pakistan Army as it initiated unprovoked Cease Fire Violation (CFV) to assist infiltration by terrorists into Indian territories, the spokesperson said.

“Last evening an attempt was made in Tangdhar to infiltrate terrorists and we retaliated. Pakistan carried out attack by firing at our post in which we did suffer, but before they could attempt the infiltration it was decided that we target that terror camps across,” said General Rawat.

Pakistan, however, has rejected reports that the Indian Army targeted their terror camps in the Pakistan Occupied Kashmir (POK) and said it can arrange a visit of diplomats from P5 nations to the area to expose India’s “falsehood”.

The Foreign Office said Pakistan has called upon the P-5 countries (permanent members of the United Nations Security Council) to ask India to provide information about the terror launch pads. It said Pakistan is willing to arrange a visit of the P5 diplomats to those locations.

Meanwhile, Pakistan summoned Indian envoy Gaurav Ahluwalia to condemn the firing by Indian troops that it said killed five civilians along the LoC in Jura, Shahkot and Nausehri Sectors.

Giving details of the punitive action, the  Army said one civilian Mohammad Sadiq was killed and three others were injured belonging to Ghundhishat village of Tangdhar district in “Pakistan Army artillery firing.”

The spokesperson said Indian Army “retains the right to respond at a time and place of it’s choosing” in case the Pakistan Army continues to assist terror activities across Indian borders.

Defence sources said four launch pads in POK were targeted after civilians causalities in Tangdhar district on the Indian side. “It was a direct assault at the same time using heavy artillery. At least six Pakistani soldiers were killed in the firing,” said one source,  adding each launch pad had over 15-20 terrorists waiting to infiltrate.

The launch pads were located South of Zura in POK and posts included Athmuqam and Kundalshahi and sources confirmed that Indian Army has used 155mm heavy artillery guns. Usually during ceasefire violations, small arms are used and as caliber escalation happens heavy mortar is used eventually leading to the use of heavy artillery which has been intermittently used by both sides on the LoC in recent times.

During the day, Defence Minister Rajnath Singh spoke to General Rawat who apprised Singh of the developments and the situation along the LoC.

Tangdhar is one of the traditional infiltration routes in North Kashmir. The ingress routes there will be closed in the next few weeks after snowfall and therefore the Pakistan army is desperate to push in as many terrorists possible before it.

Moreover, the punitive action on Sunday is one of the biggest since abrogation of Article 370 giving special status to Jammu & Kashmir on August five. So far, more than 2,300 cease of fire violations have taken place since January this year as compared to 1,600 odd last year.

Also, nine Indian soldiers have died in ceasefire violations so far since August 5.

However, defence sources rejected any fatal casualties on the Indian Army while observing that if there was one casualty “we have to declare” as the system is so and there are procedures to follow. “We have no scope to hide causalities,” the source added.