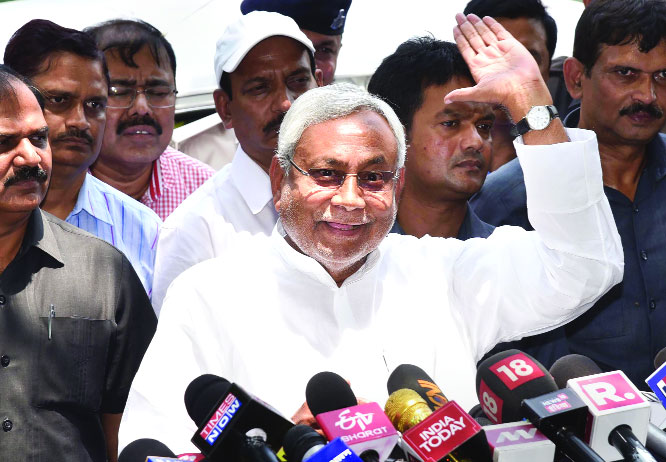 Bihar Chief Minister and Janata Dal (U) president Nitish Kumar on Friday made it clear that there is no question that his party will join the Union Cabinet in future even as he disclosed that BJP chief Amit Shah made repeated attempts to convince him to accept his proposal for one berth in the Modi Cabinet.

“As the JD(U) national president, I want to tell that there is no question of JD(U) joining the Union Cabinet in the future,” news agency PTI quoted Kumar telling reporters at the Patna airport on his returning from Delhi after participating in the swearing-in ceremony of Modi.

Nitish, however, made it clear that one should not have any confusion that being in the Government is the only testimony that they are with the Government.  “We are firmly with the NDA,” Kumar said.

The Bihar CM insisted there is no “unease” between the alliance partners and that the decision against joining the Ministry was taken as the JD(U)’s presence there would have been merely “symbolic”.

The JD(U) president said Shah called him up on May 28 and said he wanted to meet him for discussion the next day. He said the two met in New Delhi Shah told him that his party wanted to share power with all NDA constituents, and suggested that the JD(U) accepts a Cabinet berth.

“I kept listening to him and the sense I had was that it was to be a symbolic presence for the JD(U) in the Government. I didn’t want that. Still, as he insisted, I told him that I will consult my party and get back to him,” Kumar told reporters.

He said he consulted the JD (U) office bearers and MPs —16 in the Lok Sabha and 6 in the Rajya Sabha-- on the issue.                “The unanimous view was that we should stay out of the Ministry. Everybody felt there should be proportional representation in an alliance Government,” said the Bihar Chief Minister, adding he did not convey to Shah the number of seats he wanted for his party in the union council of Ministers.

Media reports had claimed his talks with the BJP leadership collapsed as he insisted on a Cabinet berth, one Minister-of-State with independent charge and MoS each.

He said BJP general secretary in-charge of Bihar Bhupendra Yadav met him that night and repeated the offer.    “I told him there is no sense of regret or unease in my party on the issue. He has forged this alliance in the interest of Bihar and the coalition Government is functioning smoothly,” he said.

Kumar told Yadav the feeling in the JD(U) was that there should be “proportional representation” for his party.

When asked how that proportional representation would have been determined, he said, the number could be reached by taking into account the seats each party won country-wide or in Bihar.

“It was for them to decide. In any case, they had an absolute majority on their own. We were not ready for a symbolic presence in the Government.  We are with the (Modi) Government. Being a part of it is not necessary,” he said.

Kumar said Shah again dialed him the next morning. “I repeated what I had told the BJP general secretary. We may not be part of the Government but we are firmly with it,” he said.

The JD (U)-BJP-LJP alliance in Bihar swept the Lok Sabha polls winning 39 of the State’s 40 seats. The BJP and JD (U) had contested 17 seats each.