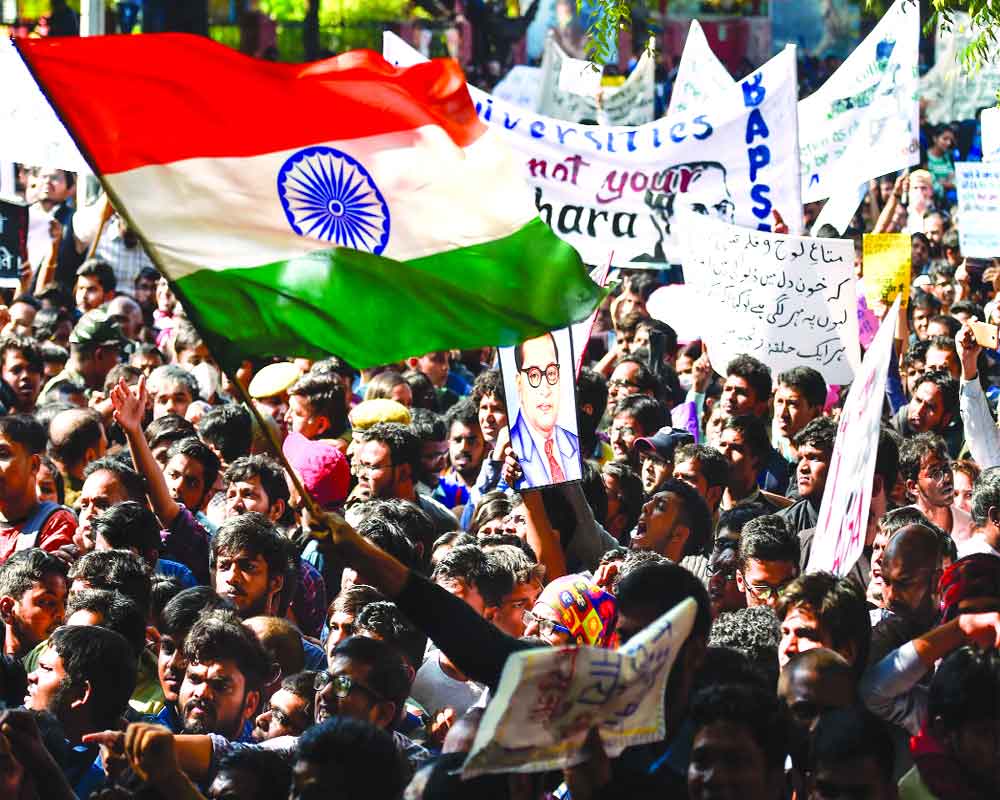 Traffic in parts of Lutyens’ Delhi was hit as students of Jawaharlal Nehru University (JNU) carrying placards and chanting slogans marched towards Parliament on the first day of the Winter Session on Monday  demanding the rollback of the proposed hostel fee hike. But they were stopped by the Delhi Police on the road outside the Safdarjang Tomb.

The protesters sat on the road leading to jam on Aurobindo Marg and choking arterial roads with the cascading impact felt till C-hexagon, the Indian Gate roundabout.

Vehicles on Nelson Mandela Marg, Aurobindo Marg and Baba Gang Nath Marg moved at a snail’s pace, a senior police officer said. The Delhi Metro closed entry and exit points of three stations near Parliament for a few hours due to the protest.

Many commuters took to Twitter to vent their ire as they got stuck in bumper-to-bumper traffic for hours due to  protest.

Around 100 JNU students, including students union president Aishe Ghosh, were detained and released later. Devesh Srivastva, the Joint Commissioner of Police, Southern eastern range, said that the protest ended around 7.30 pm after talks following which students moved towards their campus.

“With a view to restore the normal functioning of JNU through dialogue with all stakeholders and to advise the university administration for resolution of contentious issues, the Government has appointed a three-member high power committee,” HRD Secretary R Subrahmanyam said.

“The committee will initiate dialogue with the students and varsity administration immediately and submit recommendations. The UGC will provide required support for functioning of the committee,” Subrahmanyam said.

Senior Delhi Police officers kept on appealing the agitating students to maintain law and order and return to hostel in the JNU campus but students dug in their heels. Despite the adamant students, police officers kept them engaged and finally succeeded in persuading them to leave for their respective destinations.

When asked whether the students could return on Tuesday to press for their demands, Srivastva said there is no information about this but they remain vigilant to ensure that no untoward incident takes place in the city.

JNU Students Union, vice president Saket Moon said, “The police are telling us they will take a delegation to meet HRD officials. We will decide on sending a delegation only after our colleagues detained at unknown locations are released. We want representation in the HRD panel.”

Meanwhile, the protesting students also alleged that police restored ‘lathi’ charge to disperse them in which several students’ sustained injuries. However, police said that they will look into the allegation of lathi charge and they will speak to the students about it.

“Around 100 students were detained by police. Despite continued defiance by some groups of students, methods of persuasion were resorted to, and there was no use of water cannons, tear gas shells or lathi-charge at any stage of the protest.  Apart from 10 companies of CAPF, around 800 Delhi Police personnel were deployed to handle the protest and ensure maintenance of law and order,” said a senior police official.

The students, who were holding a protest on the university’s premises for the last three weeks, hit the streets seeking to get the attention of Parliament about their demands, asserting they will not relent until the Government withdraws the hike.

Earlier on Monday morning, section-144 was imposed outside the JNU campus ahead of the protest. Delhi Police personnel and Central Armed Police Force (CAPF) stopped the students on the Baba Ganganath Marg, around 600 metres from the main gate of the university.

But initially on Monday afternoon, the barricades outside JNU’s gates were removed and the students were allowed to march towards Parliament but were again stopped on road outside the Safdarjang Tomb. The students sat on road demanding the release of students detained by the police.

The students also alleged that the police used baton on them at Safdarjang Tomb while they were marching towards Parliament, however, the same was refuted by the Delhi Police. Mandeep Singh Randhawa, the Deputy Commissioner of Police (DCP), Central district and Public Relation Officer (PRO) of Delhi Police said that police will enquire about the lathi charge allegation.

“It could be possible that some of them sustained injuries when the barricades were broken by the students. Even some police personnel got injured,” the Randhawa added.

However, Aishe Gosh said they took out a peaceful march from JNU. “The police thought they would detain students including two JNUSU office bearers and the movement would end, but every student is a leader. We are all fighting together. The Delhi Police is upset. Till the time there is not a complete rollback of the hike and of the IHA manual, we will continue our agitation.”

“Students wanted to draw attention of Parliamentarians towards the issue following which a march was organized but the police lathi charged us and detained several students. Several students are injured. We were just going to our representatives,” said S Balaji, former president of JNUSU.

The protest by students also lead to the traffic jams at several areas in Central Delhi including Nelson Mandela Marg, Aurobindo Marg and Baba Gang Nath Marg where the traffic could be seen moving a snail’s pace.

The simmering discontent among the JNU students community against the university administration over the proposed fee hike took form of a massive protest on November 11 with students registering their protest in front of Union Human Resource Development (HRD) Minister on the day of the ‘convocation’.

On November 13, JNU Executive Council (EC) in a meeting held outside the University campus decided to partially rollback the hike in hostel fees.

The committee also proposed a new scheme for economic assistance to the Economically Weaker Section (EWS) students. “The newly introduced service charges of Rs 1,700 for sanitation, maintenance, cook, mess helper has not been rolled back nor reduced,” said a student.