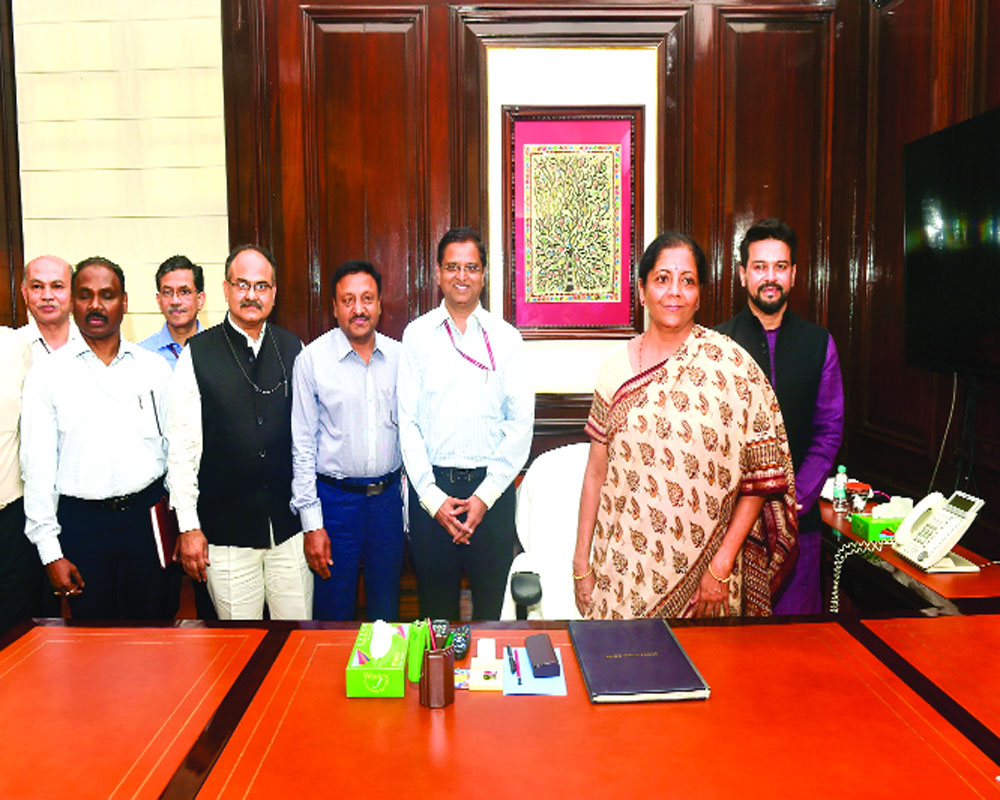 The biggest surprise in the portfolio allocation of the Modi Cabinet on Friday was  crucial Finance Ministry going to Nirmala Sitharaman, who was immediately greeted by the forecast of a sagging economy which saw GDP falling to a five-year low of 5.8 per cent  and the Government admitting that the unemployment has hit a 45-year high figure.

Indira — who handled the Finance Ministry in 1970-71 — as PM had held additional charge of the Defence Ministry.

Among the BJP leaders, Niramala is a relatively junior face in the Modi Government.

She joined the BJP in 2008 and was made a member of the National Executive. She was nominated as party spokesperson in March 2010 and has been a full time party worker since then. Her elevation as Finance Minister has raised eyebrows both within and outside the BJP.

Nirmala took over as Defence Minister in September 2017 taking over from Arun Jaitley, who was holding the portfolio as additional charge.

At a time when the GDP is falling, unemployment is rising, export and FDI flow slowing down, and credit off take and NPA emerging major area of concerns, news agency PTI quoted analysts as saying that the narrative in markets will be about economic policies that will be adopted to revive and stimulate the slowing economy.

“The ambiguity of portfolio allocation is now removed, so this is good for the market in a sense. We will get to see new Finance Minister Nirmala’s proposals and approach in the Budget due in about a month,” said Jagannadham Thunuguntla, Sr VP and Head of Research, Centrum Broking Limited.

“Emergence of clarity is what was important, and now narrative in markets will be about the economic policies that will be adopted to revive and stimulate the slowing economy,” he said.

Meanwhile, India’s economic growth rate slowed to five-year low of 5.8 per cent in January-March 2018-19, due to poor performance in agriculture and manufacturing sectors, official data released on Friday said.

On the unemployment front, Nirmala faced the daunting task of dealing with jobless growth. Months after rejecting the claim that India’s unemployment rate had touched a 45-year high, the Narendra Modi Government admitted the same on Friday with the latest data showing that joblessness had indeed touched 6.1 per cent from July 2017 to June 2018. The unemployment rate is defined as the percentage of persons unemployed among the total labour force.

The data released by the Government on a day when Modi 2.0 Cabinet took charge showed 7.8 per cent of all employable urban youth being jobless, while the percentage for the rural was 5.3 per cent. The joblessness among males on all India basis was 6.2 per cent, while it was 5.7 per cent in case of females.

The data comes from the Periodic Labour Force Survey (PLFS), which was conducted by the National Sample Survey Office (NSSO) from July 2017 to June 2018, and covered 4.3 lakh people across 1.02 lakh households. The PLFS notes that the all-India unemployment rate  was at 6.1 per cent for 2017-18, the highest since 1972-73.

The Government had earlier brushed aside a leaked official report on the country’s poor job scenario and maintained that the unemployment data was yet to be finalised. The Modi Government had come under fire for withholding the key macro data, with the Opposition parties alleging that it was a deliberate attempt to hide its non-performance. Moreover, some members of the Statistical Commission had earlier resigned to protest against the Government’s decision to withhold the data.

The data poses a huge challenge to the Modi Government which has returned to power for the second term on the promise that it will set policies right and ensure faster economic growth and employment. The data is also significant because this was the first comprehensive assessment of the employment situation conducted after Modi’s decision in November 2016 to withdraw most of the country’s banknotes from circulation overnight.