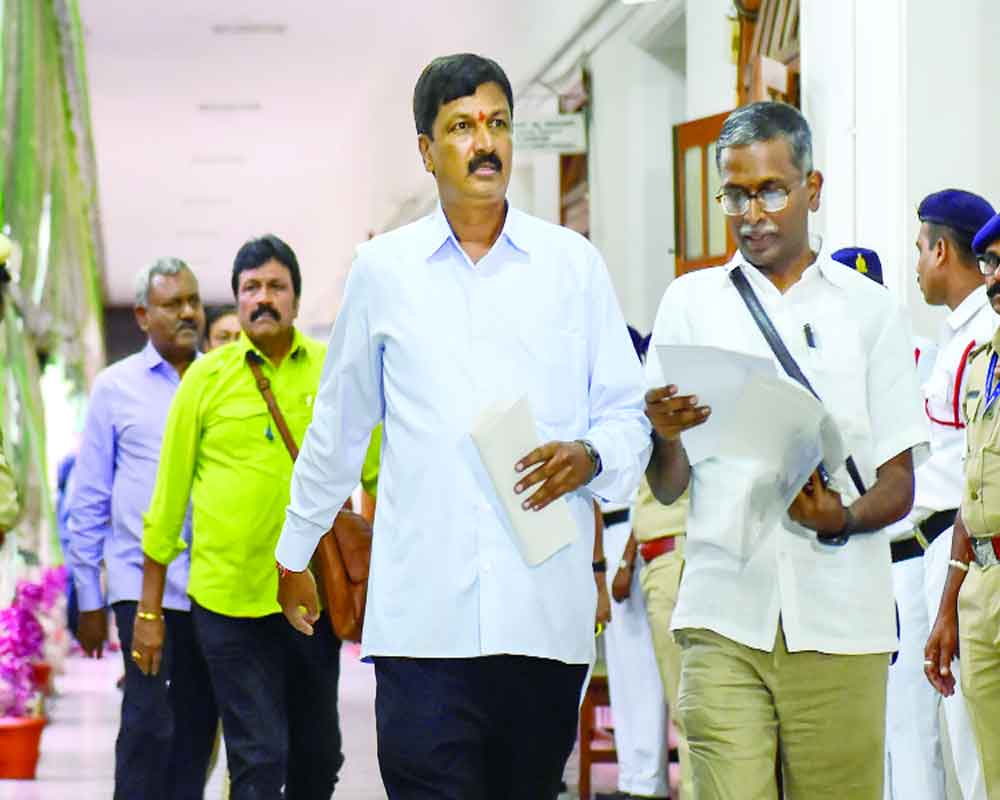 On court order for his call on resignations in day, Ramesh says he can’t act at lightning speed

Under heavy police protection, 10 rebel Congress MLAs flew in a chartered flight from Mumbai to Bengaluru on Thursday evening and submitted their resignations to the Karnataka Assembly Speaker, who seemed in no hurry to end the political drama any sooner.

In a Press conference after the meeting with MLAs, Speaker KR Ramesh Kumar said, “The rebel MLAs have come and submitted their resignations. The resignations are in prescribed format. As per the rules I have to ascertain the genuineness of the resignations. I can’t be expected to act on lightning speed.”

The Speaker put off taking the decision on the resignation of the MLAs despite a Supreme Court Bench headed by Chief Justice Ranjan Gogoi asking him to decide on the issue during the course of the day.

The Bench, also comprising Justices Deepak Gupta and Aniruddha Bose, said the decision taken by the Speaker has to be intimated on Friday when the court takes up the matter again.

The apex court also directed the Karnataka DGP to provide protection to the 10 MLAs from Bengaluru airport to the Assembly after their arrival from Mumbai.

The Speaker said, “I have to respect the Constitution and rules. I am not under anybody’s obligation. I am working under the Constitution. It is just not (the case of) accepting or rejecting resignation”.

The Speaker spoke about anti-defection law and the 10th Schedule and said he would strictly go by the Constitution.

“The honourable members approached me on July 6. There was no need for them to go to the SC. They could have come and approached me. Please reproduce my words. They have resigned. But I have not accepted. I have to convince myself,” the Speaker said.

“I don’t violate rules. They have asked me to take a decision. I have video recorded the entire proceedings,” he said, adding, “I confess I am wholly dependent on media to reach out to the people on my stand”.

On the disqualification petition against Ramesh Jarkiholi and Mahesh Kumathahalli, the Speaker said though resignation and disqualification are similar, in case of disqualification they cannot enter the House for the rest of the term of the House. “Therefore, if I hurriedly decide on this I will not do justice. I am in a fix, I want to go by my conscience,” he added.

The Speaker, according to analysts, was unhappy with the MLAs and was buying time for the JD(S)-Congress coalition Government.

Meanwhile, the Congress has issued the whip to its MLAs to attend the Assembly session starting on Friday. If they abstain from the session they might lose their membership under the anti-defection Bill. Analysts say if they don’t vote on the Finance Bill, the Government will fall on its own.

The 10-day Assembly session is crucial and the coalition Government is certainly taking legal route and buying time to save the Government.

Despite mounting trouble, Karnataka Chief Minister HD Kumaraswamy refused to resign. On Thursday he said, “Why should I resign? We have no problem. What is the necessity for me to resign?”

“In 2009-10, when Yeddyurappa was Chief Minister, at that time 18 MLAs (legislators) including eight Ministers opposed him. Ultimately what happened,” Kumaraswamy said.

Congress leaders, including Sonia Gandhi, Rahul Gandhi and Anand Sharma, protested in front of the Mahatma Gandhi statue in Parliament on Wednesday against Karnataka and Goa political crisis.

The 13-month-old Congress-JD(S) Government slumped into crisis following the resignation of 10 MLAs from the membership of the State Assembly last week. Congress’ Roshan Baig and independent H Nagesh have also deserted the HD Kumaraswamy Government.

The Congress has been accusing the BJP of conspiring to topple the coalition Government in Karnataka. The ruling alliance is making all efforts to protect its Government which seems to have fallen short of a majority.

Kumaraswamy chaired a crucial Cabinet meeting on Thursday to discuss the situation. According to sources, the State Cabinet meeting has resolved to face the situation “bravely” and the Chief Minister was ready to face a no-confidence motion, if moved by the Opposition BJP.

In the Supreme Court, at the outset, the Bench made it clear that it was passing orders on the 10 MLAs who were before it and not the others.

The 10 rebel MLAs had moved apex court alleging that the Karnataka Assembly Speaker was not accepting their resignations.

Senior advocate Mukul Rohatgi, appearing for the MLAs, submitted that there is a startling state of affairs in the Karnataka Assembly where 15 MLAs want to resign but the Speaker is not accepting their resignations.

He submitted that on July 6, when some rebel MLAs went to submit their resignations, the Speaker left his office through the back door.

Rohatgi also said one of the rebel MLAs was manhandled when he tried to reach the Speaker’s office on Wednesday.

He said the Karnataka Assembly will meet on July 12, but before that the ruling coalition has moved a disqualification application against the rebel MLAs.

“Instead of ordering for the floor test, attempt is made to disqualify the rebel MLAs. We want to resign and go to the public and seek re-election,” Rohatgi submitted on behalf of his clients.

When the senior advocate said 15 MLAs have already tendered their resignation, the Bench said, “We will take note of only 10 MLAs who are before us.”

As Rohatgi narrated the sequence of events from July 1, the Bench orally observed “nothing surprises us”.

The senior advocate also reminded the Bench about a May 2018 hearing when the issue of Government formation in Karnataka after the State Assembly elections had reached the apex court.

He said like last year, the court can direct the Speaker to conduct the floor test.

Rohatgi said there is total ruckus in both Bengaluru and Mumbai, where the rebel MLAs are staying.

He submitted that in view of such incidents, there was a need for police protection for the rebel MLAs for their transit from Mumbai to Bengaluru.