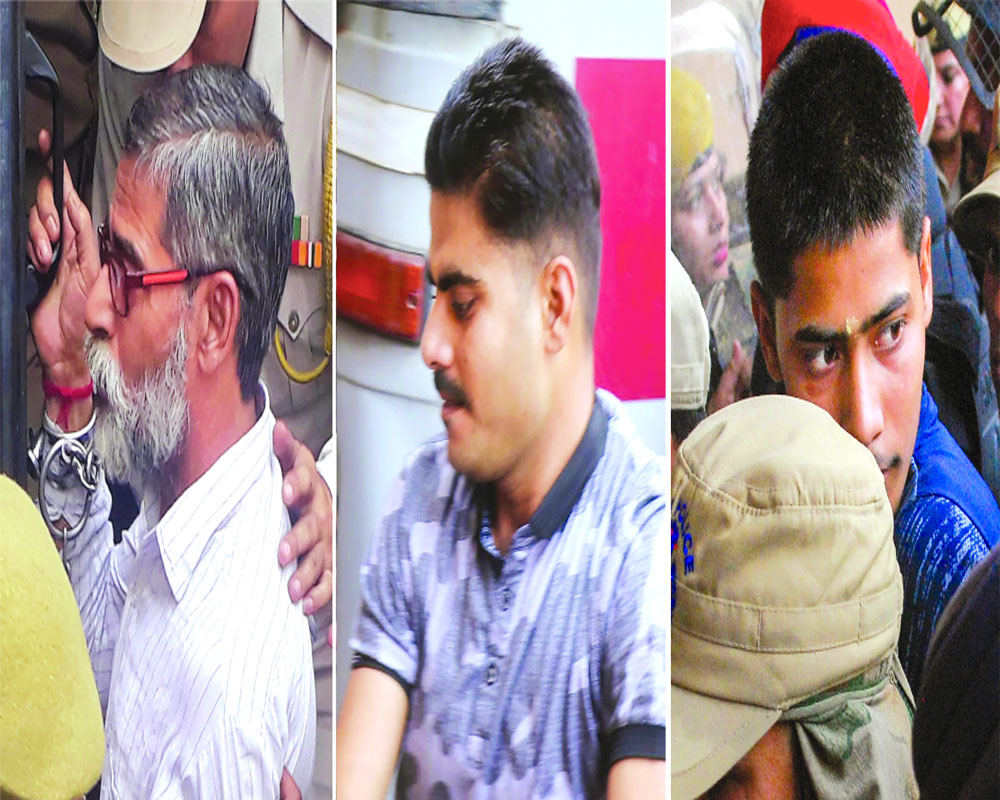 A fast-track court in Pathankot on Monday awarded life sentence to three persons for the horrific gangrape-and-murder of an eight-year-old girl in Jammu & Kashmir’s Kathua district. Three other convicts have been sentenced to five-year imprisonment.

However, the court acquitted the seventh accused, Vishal Jhangotra — son of main accused Sanji Ram — in the absence of any credible evidence. The eighth accused, a juvenile, is being tried in Kathua.

Sanjhi Ram, a former revenue officer and caretaker of the temple where the crime took place, special police officer Deepak Khajuria, and Parvesh Kumar, a civilian, have been given life-term imprisonment after conviction under the Ranbir Penal Code sections pertaining to criminal conspiracy, murder, kidnapping, gangrape, destruction of evidence, drugging the victim and common intention, the lawyers said. The three have also been fined Rs 1 lakh each.

In his 400-page judgment, Pathankot District and Sessions Judge Tejwinder Singh said, “Perpetrators of the crime have acted in such a manner as if a ‘law of the jungle’ prevailed. Heaven and hell are not geographical locations. Our thoughts, actions and character create a situation of heaven or hell for us. Needless to say the commission of this devilish and monstrous crime has sent shock waves across society, which means the guilty need to be brought under the sword of justice.”

Lawyers defending Vishal said he was away at college in Meerut, where he is pursuing a BSc degree in agriculture, at the time of the crime.

J&K Crime Branch’s chargesheet, however, said, “In the course of investigation, it transpired that Vishal actively took part in the rape and murder of the victim and later tried to create an alibi by resorting to manipulating attendance records of his college in connivance with Sanjhi Ram and a relative Kishore Kumar.”

Darshana Devi, mother, and Monika, elder sister of Vishal Jhangotra, told The Pioneer, “We are happy that court has acquitted Vishal in the case. The crime branch had implicated innocent villagers,” Monika said.

They once again appealed to Governor Satya Pal Malik and Prime Minister Narendra Modi to order a CBI probe in the matter to punish the real culprits behind the rape and murder of the minor girl.

Hearing in the case began in Pathankot on May 30, 2018, after the Supreme Court transferred it out of J&K.  The court heard the case for 247 days, with arguments finally concluding on June 3.

Some 114 prosecution and 18 defence witnesses were examined. As many as 74 lawyers appeared in the case --- 57 for defence and the rest for prosecution.

According to the 15-page charge sheet, the eight-year-old girl, who was kidnapped on January 10 last year, was raped in captivity in a small village temple in Kathua district after having been kept sedated for four days before she was bludgeoned to death. The girl’s body was found on January 17 and autopsy confirmed gangrape and murder.

Welcoming the verdict, former  J&K Chief Minister Mehbooba Mufti put out a statement on Twitter saying it was high time “We stop playing politics over a heinous crime where a child was drugged, raped repeatedly and  then bludgeoned to death. Hope loopholes in our judicial system are not exploited and  culprits get exemplary punishment.”

Former J&K Chief Minister and National Conference vice-president Omar Abdullah too posted a tweet, “Amen to that. The guilty deserve the most severe punishment possible under law. And to those politicians who defended the accused, vilified the victim & threatened the legal system, no words of condemnation are enough.”