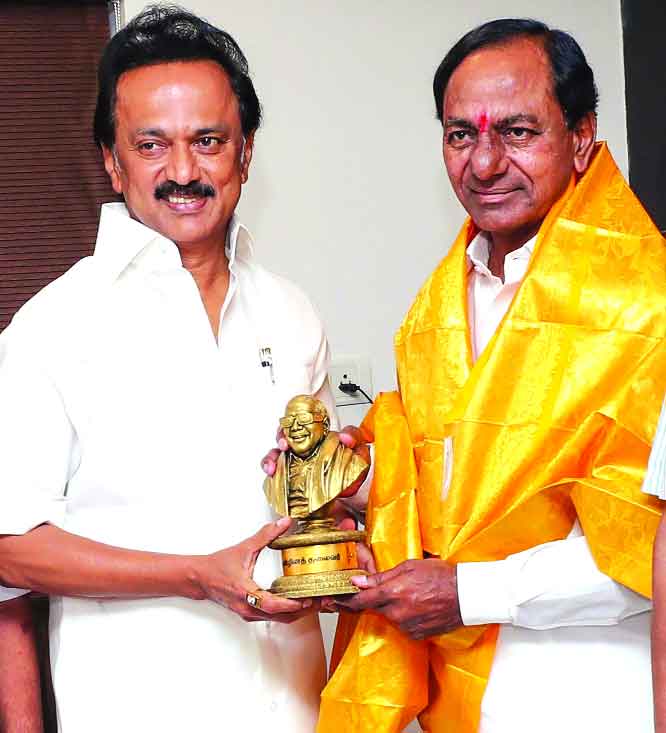 The southern odyssey of Telangana Chief Minister K Chandrasekhar Rao, with an eye on the post-poll scenario in Delhi, remained inconclusive despite a 70-minute long meeting with DMK president MK Stalin on Monday.

KCR drove down to Stalin’s palatial residence in Chennai and held talks with him in the presence of Durai Murugan and TR Baalu, close advisers of Stalin. Both KCR and Stalin  did not meet the waiting reporters after the meeting. This could be because of the failure of KCR to convince Stalin about the possibility of a non-Congress and non-BJP front to lead the nation.

The TRS chief had described Rahul Gandhi as a buffoon and also as a politician of no significance. Leaders of the DMK refused to reveal anything about what transpired in the meeting. KCR had met Kerala Chief Minister Pinarayi Vijayan last week.

“KCR is on a southern political pilgrimage and there is nothing significant about it,” said R Balasankar, author and political commentator about KCR’s trip to Kerala and Tamil Nadu. KS Azhagiri, president, Tamil Nadu Congress Committee and the most trusted ally of the DMK, scoffed at KCR’s overtures to various political parties.

“Chandrasekhar Rao paid his obeisance to Meemakshi Amman at Madurai. He also worshipped at Ramaswamy Temple at Rameswaram. Now he has come to Chennai to pay obeisance to Stalin,” Azhagiri told reporters in Chennai.

The Congress leader said there no was possibility of any Third Front in India. “The Congress will emerge as the largest party and form the Government,” said Azhagiri.

Sources close to Stalin told The Pioneer that KCR may have had second thoughts about the Federal Front. “Perhaps he has understood that a non-Congress, non-BJP Government is not viable. Rao may be reworking on his strategy vis-à-vis the Congress,” said Sam Rajappa, political commentator with good rapport with the DMK leadership.

The AIADMK described the DMK as political opportunists of the highest order. “Consistency has never been the hallmark of the DMK and Stalin may be thinking of dumping Rahul and the Congress,” said D Jayakumar, Tamil Nadu Minister for Fisheries. But Anbumani Ramdoss, the PMK leader, said Stalin’s meeting with KCR was the reflection of the internal squabbles in the Secular Progressive Alliance (SPA), the Tamil version of the UPA.