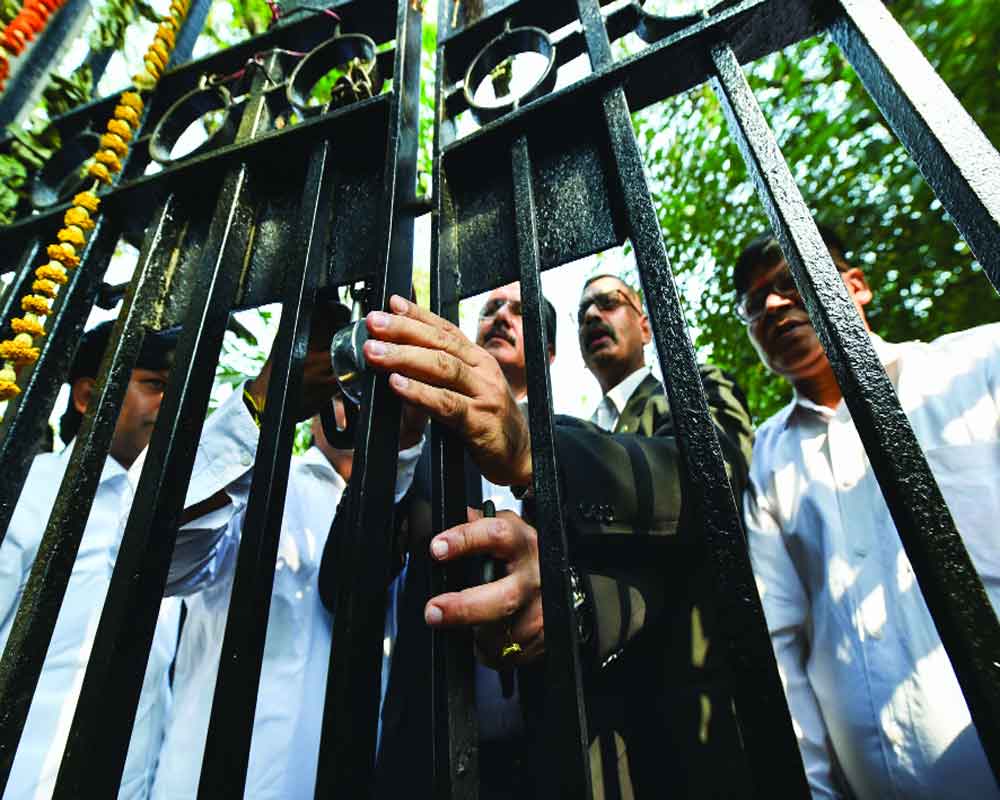 Four days after clashes between the Delhi Police and lawyers in Tis Hazari Court complex, lawyers on abstained from work for the third consecutive day on Wednesday and closed gates of all six district courts, including Saket and Patiala House courts, denying access to litigants in the courts.

Also, the Delhi High Court on Wednesday dismissed the Delhi Police review petition and said its November 3 order, not to take coercive steps against lawyers, was only in relation to the two FIRs lodged on November 2 with regard to the clash between the police and lawyers at Tis Hazari Courts Complex.

A Bench of Chief Justice DN Patel and Justice C Hari Shankar said there is no need for clarification of the November 3 order as sought by the Centre.

The Delhi Police’s first application was filed on Tuesday after an on-duty policeman and a civilian were allegedly thrashed by advocates outside Saket Court premises on Monday and Tuesday. Another application was moved by the Centre on Wednesday seeking modification of the November 3 order by which two senior police officers connected to the clash were directed to be transferred.

The Bench disposed of both applications, saying a judicial enquiry has already been initiated and the panel carrying out the probe would function uninfluenced by its observations in the November 3 order.

The High Court order stated that the bar and the police establishment represent and constitute, as it were, the preserver, and the protector of the rule of law. “They are but the two faces of the coin of justice. We are hopeful that if a sincere attempt is made in this direction, peace and harmony will ultimately prevail,” the Bench stated in its order.

However, Bar Council of India (BCI) chairman Manan Kumar Mishra said no incident of violence involving lawyers, police and the public will be tolerated and action will be taken against the guilty. He also accused policemen of making provocative statements against judges and lawyers during their protests outside the police headquarters.

Meanwhile, in Rohini court, two lawyers allegedly tried to commit suicide on Wednesday. One lawyer took off his clothes and poured kerosene on his body threatening to immolate himself, while another advocate climbed atop a building on the premises.

Police said they did not receive any PCR call in connection with the two incidents at the Rohini court. The lawyers raised slogans while litigants were standing outside the gates of the courts.

While in Saket courts several litigants returned to their homes after they were not allowed to enter the court premises by the lawyers. “All gates are locked and lawyers are not letting us in. We have urged and requested them several times. I had a last day of filling my challan,” said Amrik, a resident of Malviya Nagar.

The BCI said the lawyers will withdraw the strike and resume work from Thursday and action will be taken against the guilty lawyers.

The Council also demanded the arrest, within seven days, of the Delhi Police personnel involved in the scuffle.

Delhi Bar Associations’ members said litigants were not allowed in the court complex due to security reasons. “There are no police officials inside. Who will do the security check of the litigants. There may be some criminals among them too,” said advocate Dhir Singh Kasana, general secretary of the coordination committee of All District Courts Bar Associations in Delhi.

“We are a big family here consisting of more than 10,000 members. There has been no assurance from anyone for the welfare of the injured lawyers and our security,” said Kasana, who was protesting at the gate of Saket district court complex.

Meanwhile, a Supreme Court lawyer has sent a legal notice on Commissioner of Police Amulya Patnaik for “not taking action” against the Delhi Police personnel who protested in front of the police headquarters at ITO.

“They protesting police addressed the media, creating fears in the lawyers and in the civil society.The Delhi Police and their senior officers aired derogatory statement against advocates,” the legal notice sent by Varun Thakur and Associates read.

Further claiming that the demonstration was illegal, the lawyer said, “Such irresponsible activities of your police forces is the clear violation of the Section 3 (1) (a) (b) (c) and 3 (2) of The Police Forces (Restriction of Rights) Act, 1966. The demonstration was live telecast by the national media whole day. Section (3) prohibits the police forces to participate in any demonstration, communicate with the press for their own demands, but we have seen whole days such illegal activities at public places.”

One of the protesting lawyers said on the condition of anonymity that they will not resume work till the time the policemen, who had allegedly fired and lathi charged at advocates are not arrested.

Two FIRs were registered against unidentified persons, who were seen in a video hitting a uniformed policeman on a motorcycle with his elbow and slapping him outside the Saket court.