Missing AN-32 found in ruins

Missing AN-32 found in ruins 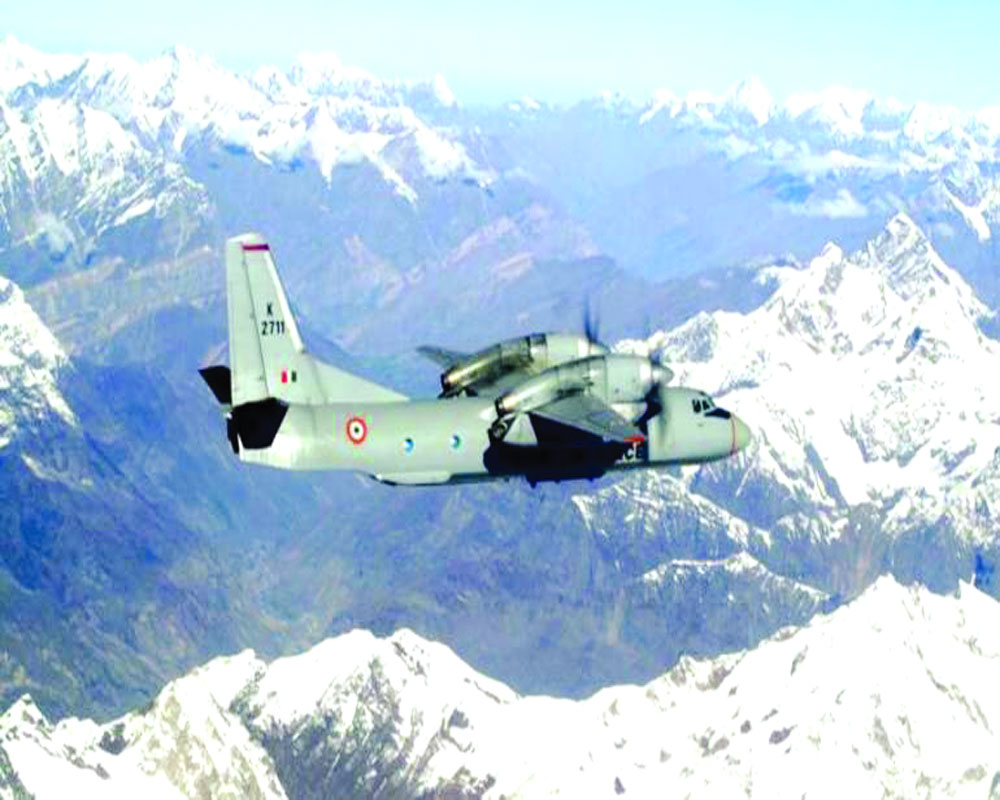 Search for survivors big challenge due to inclement weather in Arunachal

The week-long search for the AN-32 transport aircraft that went missing somewhere in the hills and forest of Arunachal Pradesh on June 3 yielded result on Tuesday when an IAF Mi-17 helicopter spotted its wreckage at the height of 12,000 feet, 16 km north of Lipo, north-east of Tato. So far there is no word on the fate of six officers, five airmen and two non-combatant aboard the ill-fated plane.

Efforts are now on to find the survivors, but it may take a day or two more before the ground troops reach the site located in dense forests and mountainous terrain.

The plane had taken off from Jorhat in Assam for Mechuka advanced landing ground in Arunachal Pradesh on June 3 at12.25 pm and was supposed to land at Mechuka, located at an altitude of 6,000 feet, about 1. 20 pm. The distance between Jorhat and Mechuka is 206 km as the crow flies and the flying time is nearly 50 minutes. When it did not land at Mechuka at the scheduled time, the IAF launched a search operation.

Mechuka advanced landing ground is the lifeline of the troops posted on the Line of Actual Control (LAC) facing China. Planes and helicopters ferry personnel, food and ammunition for the troops at the landing ground, just 30 km from the LAC.

Incidentally, an AN-32 had crashed in the same area in the same month in 2009 and all the 13 passengers were killed.

Confirming the sighting of the wreckage, the IAF said on Tuesday, “An An-32 of the Indian Air Force went missing on 3 June, 2019, after getting airborne from Air Force Station, Jorhat, Assam. The wreckage of the aircraft was spotted today 16 km north of Lipo, north-east of Tato at an approximate elevation of 12,000 ft by the IAF Mi-17 helicopter undertaking search in the expanded search zone. Efforts are now continuing to establish the status of occupants and establish survivors. Further details will be communicated as the recovery actions progress.”

Retrieval of the wreckage and survivors will be the next big challenge as the massive search and rescue operation has to contend with terrain and inclement weather. The missing personnel include Wing Commander GM Charles, Squadron Leader H Vinod, Flight Lieutenants Mohit Garg, Sumit Mohanty, Ashish Tanwar and Rajesh Thapa. The other ranks include Anoop, Sharin, KK Mishra, Pankaj Sangwan, SK Singh, Rajesh Kumar and Putali.

Small teams of commandos are likely to be airdropped near the wreckage site to look for survivors and establish the lines of communications with the air effort and ground patrols of the Army, ITBP and the local police. This will help them reach the exact spot for gathering the wreckage and carrying out other related activities, they said. The operation will take a few more days, they added.

The wreckage site is on scheduled flight path of the AN-32. The search and rescue operation for the last one week focused on three areas, including Along, Tato and Payum near Mechuka in West Siang district. The reason behind concentrating on these three areas is that it forms a triangle, they said, the areas are in the flight path of the ill-fated aircraft and the debris was near Tato. Moreover, after it lost radio contact, the plane, which obviously could not have turned back, may have continued on the designated route, they said. It is feared that the plane hit a hill and crashed as the altitude at which the debris was found indicates. However, the detailed court of enquiry will establish the reasons for the mishap, they added.

The massive search and rescue operation spread over more than 1,000 square km for the last one week was marred by bad weather for some days. It saw deployment of two SU-30 fighter jets, two C-130J special operations planes, four MI-17 and four advanced light helicopters and a long range P-8 I reconnaissance aircraft of the Navy, besides the ground troops patrolling the area where the plane could have gone down.

Moreover, satellites of the Indian Space Research Organisation (ISRO) were also used to map the area besides unmanned aerial vehicles(UAV). The IAF also announced a reward of Rs 5 lakh for anyone providing information about giving information about the location of the aircraft. Air Force Chief BS Dhanoa had visited Jorhat last weekend to review the operations and met the families of the missing personnel. Defence Minister Rajnath Singh too met family members of some of the personnel in New Delhi last week and assured them of all possible help.

At present, the IAF has nearly 100 Russian origin twin engine turboprop aircraft inducted into service in mid 1980s. After the 2009 mishap, India inked a 400-million dollar deal with Ukraine for upgrading the AN-32s and at least 50 planes have been retrofitted so far. However, the plane which crashed was not upgraded. An AN-32 en route Port Blair from Chennai in July 2016 carrying 29 passengers is missing so far and feared to crashed and drowned in the Bay of Bengal.