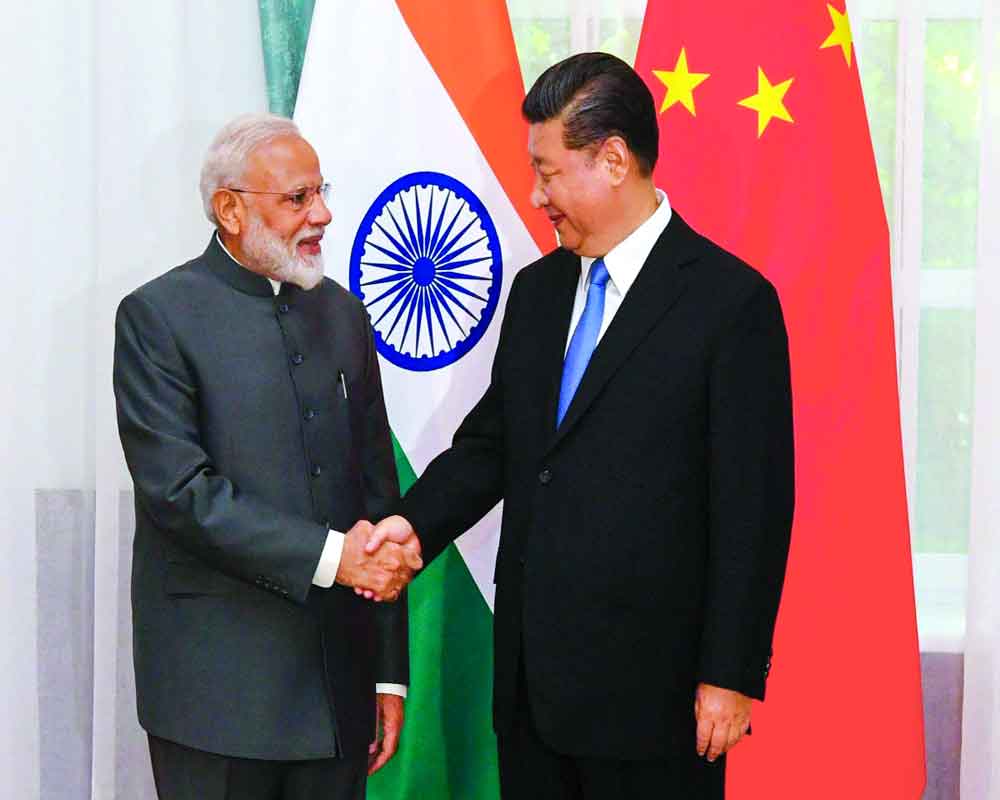 Only concrete action on terror by Pak can revive bilateral talks, asserts PM

Prime Minister Narendra Modi on Thursday raised the issue of cross-border terrorism emanating from Pakistan during his talks with Chinese President Xi Jinping here and said India expects “concrete action” by Islamabad to create an atmosphere free of terror for the resumption of dialogue.

Modi met Xi on the sidelines of the Shanghai Cooperation Organisation (SCO) Summit here and discussed the full spectrum of bilateral relations. This is the first meeting between the two leaders after Modi’s re-election following the stunning victory of the BJP in the general elections last month.

The meeting also comes a month after the 1267 Al Qaeda Sanctions Committee of the powerful UN Security Council designated Pakistan-based terror group Jaish-e-Mohammed chief Masood Azhar as a global terrorist after China, Pakistan’s closest ally, lifted its technical hold on the proposal to blacklist him.

After the delegation-level talks with Xi, Modi tweeted, “Had an extremely fruitful meeting with President Xi Jinping. Our talks included the full spectrum of India-China relations. We shall continue working together to improve economic and cultural ties between our nations.”

The Modi-Xi meeting began with President Xi congratulating the Indian Prime Minister over his election victory. “After the election results in India, I got your message, and today again you wish me on the victory, I am very grateful to you for this,” Modi replied.

Briefing the reporters after the meeting, Foreign Secretary Vijay Gokhale said that there was a brief discussion on Pakistan during the talks between the two leaders. He said India has a consistent position with respect to Pakistan that it wants peaceful relations with Islamabad. Gokhale said Modi told Xi that he has made efforts to improve ties with Islamabad but these efforts have been “derailed”.

“Pakistan needs to create an atmosphere free of terror, but at this stage we do not see it happening. We expect Islamabad to take concrete action” to resume talks, Gokhale quoted the PM as telling President Xi.

Modi’s comments came ahead of President Xi’s meeting with Pakistan Prime Minister Imran Khan, who is also here in the Kyrgyz capital to attend the SCO summit. Khan has twice written to Modi, seeking resumption of dialogue on all issues, including Kashmir.

Responding to Khan’s overtures, Modi told his Pakistani counterpart that creating trust and an environment free of violence and terrorism was essential for fostering peace and prosperity in the region. India has not been engaging with Pakistan since an attack on the Air Force base at Pathankot in January of 2016 by a Pakistan-based terror group, maintaining that talks and terror cannot go together.

Early this year, tensions flared up between India and Pakistan after a suicide bomber of Pakistan-based Jaish-e-Muhammed (JeM) killed 40 CRPF personnel in Kashmir’s Pulwama district.

Amid mounting outrage, the Indian Air Force (IAF) carried out a counter-terror operation, hitting the biggest JeM training camp in Balakot in Pakistan on February 26. The next day, Pakistan Air Force retaliated and downed a MiG-21 in an aerial combat and captured an IAF pilot, who was later handed over to India. China played a role in easing tensions between New Delhi and Islamabad.

The 2018 Wuhan summit between Prime Minister Modi and President Xi was largely credited to have turned around the bilateral relations soured by the 73-day Doklam standoff, triggered by Chinese troops attempts to build a road close to Indian border in an area also claimed by Bhutan in 2017. After the Wuhan summit, both the countries stepped up efforts to improve relations on different spheres including the military-to-military ties. The two leaders have met more than 10 times in the last five years, including thrice after their informal summit in Wuhan --- first at the Shanghai Cooperation Organisation (SCO) summit held in June last in China’s Qingdao, the second time at the BRICS summit in South Africa’s Johannesburg in July and third time in December last on the sidelines of the G-20 summit in Argentina.

Ahead of the meeting, China hinted that President Xi would highlight the need to forge a united front against US President Donald Trump’s policies of trade protectionism and unilateralism using tariffs as a weapon. China and the US have been in an escalating conflict over trade for the past year. The scope of the battle has expanded in recent months as Washington has tightened trade restrictions on Chinese telecom giant Huawei.