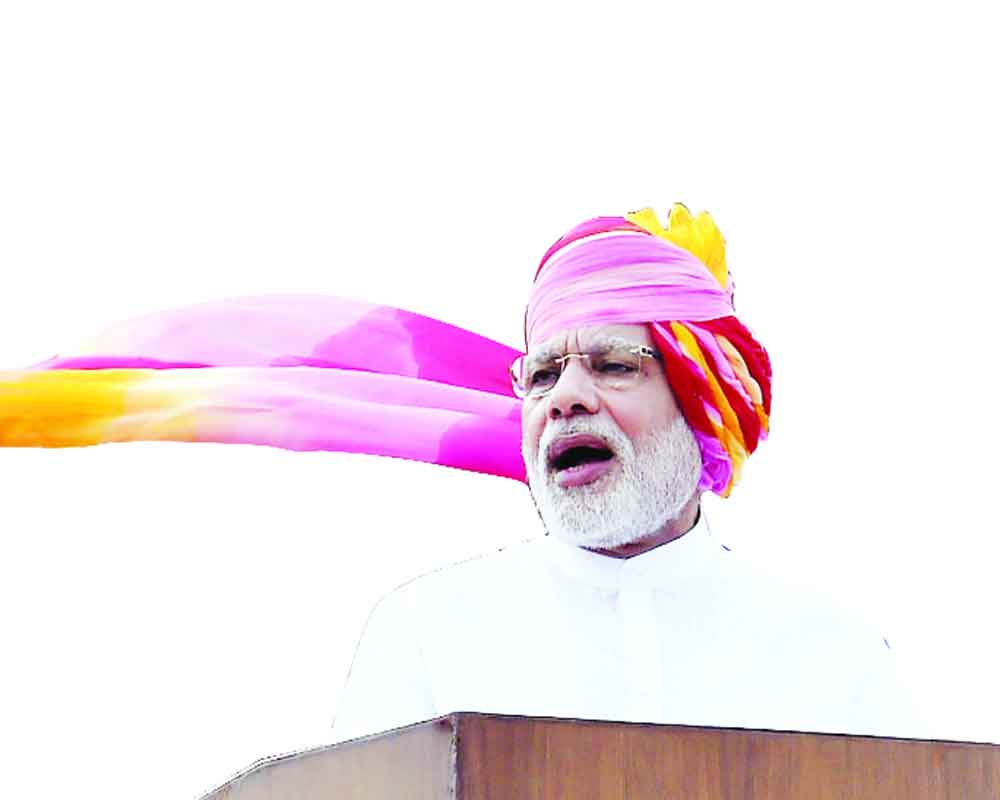 In record for a single ceremony at Rashtrapati Bhavan, 8,000 guests likely tonight

A galaxy of political personalities,  corporate honchos, film stars, Chief Ministers, and heads of  BIMSTEC countries will watch President Ram Nath Kovind administer the oath of office and secrecy to 68-year-old Narendra Modi and his ministerial colleagues at the forecourt of majestic Rashtrapati Bhavan on Thursday.

“This is for the first time that 8,000 guests will be attending the swearing-in ceremony that will be held from 7 pm to 8.30 pm  on Thursday,” said Rashtrapati Bhavan spokesperson Ashok Malik. The swearing-in ceremony will last about 90 minutes and after that a dinner will be served to around 40 dignitaries, including Vice President M Venkaiah Naidu and the Prime Minister, besides leaders of all BIMSTEC (Bay of Bengal Initiative for Multi-Sectoral Technical and Economic Cooperation) countries, said Malik.

He said it will be the biggest event held in Rashtrapati Bhavan ever. About 4,500-5,000 guests have attended such ceremonies earlier. There will be light snacks for the guests like paneer tikka, the official said.

“Dal Raisina, a speciality of Rashtrapati Bhavan’s kitchen, is cooked for about 48 hours. Its main ingredients are brought from Lucknow. The preparations for Dal Raisina started on Tuesday and it will be served to foreign delegates in a dinner to be hosted by the President,” the spokesperson said.

Leaders of all BIMSTEC countries have confirmed their participation.

President of Myanmar U Win Myint and Bhutanese Prime Minister Lotay Tshering too have confirmed their attendance. From Thailand, its Special Envoy Grisada Boonrach will represent the country at the ceremony.

The hectic consultations were on for the Cabinet formation as Prime Minister reached out  and met  senior BJP colleague Arun Jaitley to persuade him to reconsider his decision to opt out of the Cabinet. Jaitley had earlier in the day written a letter to the Prime Minister that he would not be able to take Government  responsibilities  on account of his  health conditions.

On the eve of the Government formation, suspense mounted on who all will get the Big Four berths — Home, Finance, Defence and External Affairs — as sources maintained that “non-performing Ministers” of previous regimes  may  be dropped.

Arvind Sawant, Shiv Sena MP from Mumbai South, will be sworn in as Union Minister on Thursday, a senior party leader said.

He will replace Anant Geete, the lone Sena Minister in the previous  Government, who lost from the Raigad Lok Sabha seat in last month’s election, the leader said on Wednesday.

Meanwhile,  Bihar Chief Minister and JD(U) leader Nitish  Kumar met  BJP president Amit Shah to discuss participation of the JD(U) in the Cabinet as the latter continued its consultations with his senior party  colleagues on the issue.

JD(U) spokesperson KC Tyagi said his party will be represented in the Government but declined to comment on the details of its likely representation. Kumar held a meeting with his party’s office-bearers.

JD(U) leaders are of the view that the party may get two berths, one with Cabinet rank and another with Minister of State profile. However, there has been no official word on the JD(U)’s likely representation in the Government.

According to sources, a number of senior BJP Ministers of the Modi-1 would  again be inducted into the Modi-2 council of Ministers. Sushma Swaraj, who had voluntarily decided not to contest Lok Sabha polls, may make a comeback as Modi had praised her work as Foreign Minister.

Shah is being talked about for his new role as Finance Minister though not confirmation has come to this effect.

In his 2014 swearing-in-ceremony, Modi had invited  Government heads of South Asian Association of Regional Corporation (SAARC) which included Pakistan. The then Pakistan Prime Minster Nawaz Sharief had attended the oath taking of Modi on the forecourt of the ‘Rashtrapati Bhawan.’

This time round, Pakistan President Imran Khan has not been invited to the ceremony.

The BIMSTEC member States — Bangladesh, India, Myanmar, Sri Lanka, Thailand , Nepal and Bhutan-are among the countries dependent on the Bay of Bengal. Fourteen priority sectors of cooperation have been identified and several BIMSTEC centres have been established to focus on those sectors.

It is regional group of seven countries in South Asia and South East Asia lying in littoral and adjacent areas of Bay of Bengal constituting contiguous regional unity. It was established on June 6, 1997 through Bangkok Declaration. It is headquartered in Dhaka, Bangladesh.