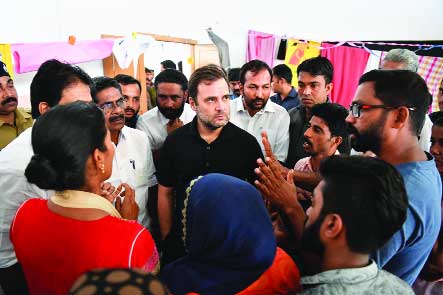 Congress leader Rahul Gandhi on Tuesday responded to Jammu & Kashmir Governor Satya Pal Malik’s offer to send him an aircraft to visit the Valley, saying all he needed was the freedom to travel and meet the people.

Rahul’s response came a day after Malik asked the Gandhi scion to fly down to the Valley and observe the situation himself after the latter claimed that there were instances of violence in J&K following the abrogation of Article 370.

While senior Congress leader Shashi Tharoor too asked the Governor to invite an all-party delegation to the Valley, Congress general secretary Priyanka Gandhi in her first reaction on the issue said the Article 370 removal was done in an unconstitutional manner.

In accepting the invitation, Rahul gave a terse reply to the Governor saying he did not need an aircraft. Malik had invited Rahul to visit J&K, saying he would send an aircraft for him, after the Congress leader said, “People were dying in the State and the situation was not normal as claimed by the Government.”

Rahul has said he and other Opposition leaders would visit Jammu & Kashmir and urged Malik to allow them the freedom to meet people, and soldiers. “Dear Governor Malik, a delegation of Opposition leaders & I will take you up on your gracious invitation to visit J&K and Ladakh. We won’t need an aircraft but please ensure us the freedom to travel & meet the people, mainstream leaders and our soldiers stationed over there,” Rahul said in a tweet message.

Congress leaders have expressed concern over the prevailing situation in Jammu & Kashmir and urged the Government to initiate a political dialogue on the issue by taking Opposition leaders into confidence and allowing them to visit the state freely.

“The manner in which it has been done is totally unconstitutional and against the principles of democracy,” Priyanka said talking to media during her visit to Sonbhadra in Uttar Pradesh where 10 tribals were killed in July over a land dispute.

“There are rules that have to be followed when such things are done, which have not been followed,” she said. The Congress general secretary said her party always stood for safeguarding the Constitution. ‘Unlike the BJP where only one voice is heard, in the Congress every voice is given importance and properly discussed to reach a conclusion,” she said.

Senior Congress spokesperson Anand Sharma said Opposition leaders should be allowed to visit Jammu & Kashmir and speak to the people there and demanded immediate release of all leaders placed under house arrest in the Valley so that they could voice their opinion.

“Since the Government has imposed restrictions in the first place and taken this one-sided decision, we urge the Government to initiate a political dialogue and take leaders of all Opposition parties into confidence,” he told reporters.

Sharma said there were concerns for Jammu & Kashmir -- now a Union territory after the Government decided to withdraw the special status accorded to the State under Article 370 of the Constitution -- as there was a complete shutdown, news blackout and the entire communication network was shut.

“Any political leader does not need the hospitality of the Governor. We demand that the Government allow Opposition leaders to visit Jammu & Kashmir freely so that the nation and the world can know if all is well there or if there is any cause of concern,” he added.

The former Union Minister said the ruling BJP had allied with the National Conference (NC) during the Atal Bihari Vajpayee Government and with the Peoples Democratic Party (PDP) during the Narendra Modi Government and that was why they recognised these as Indian political parties that abided by the Constitution.

“It will be the best that the Government takes these steps. It has been nine days since the decision,” he said.

Questioning why Opposition leaders were stopped at the Srinagar airport and not allowed to proceed any further, Sharma said, “This is not good for India’s image. Every citizen has constitutional rights. While we request citizens to abide by law, the Government should respect their constitutional rights.”