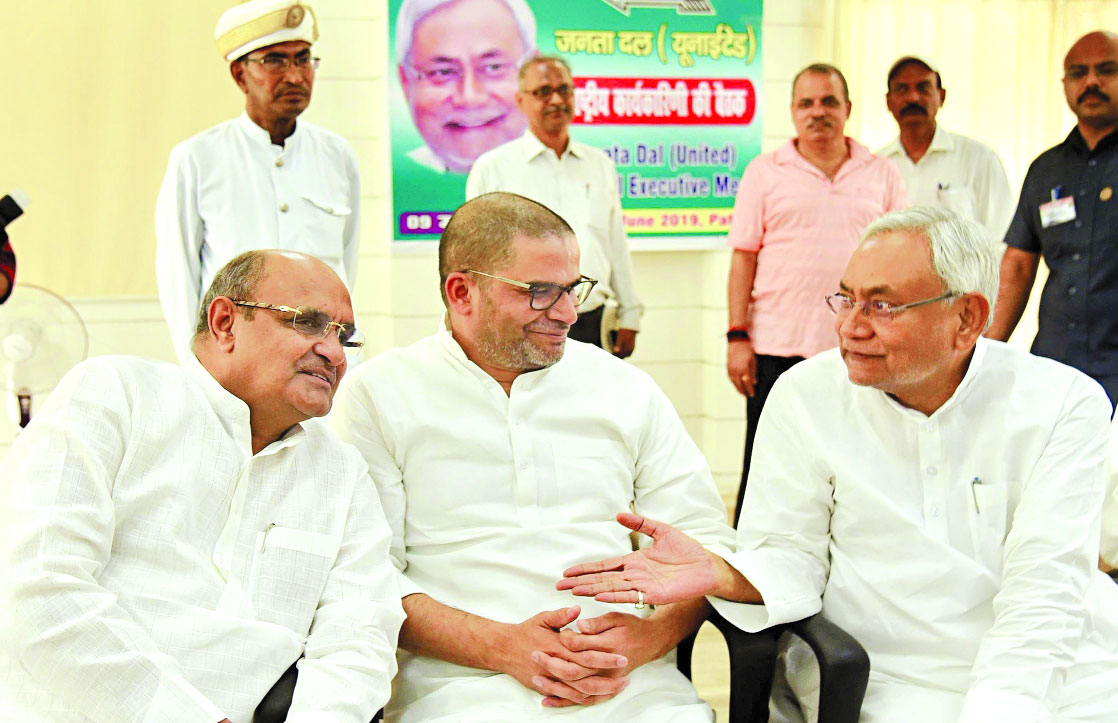 Amid reports of growing strain with the BJP, the Janata Dal(U) has said it will not be a part of the BJP-led NDA outside Bihar and will contest the upcoming Assembly polls in four States on its own. The JD(U) took the decision at its national executive meeting presided over by party president and Bihar Chief Minister Nitish Kumar.

“The decision has been taken in order to expand the presence of the JD(U) and to attain the status of a national recognised party by 2020,” party’s chief general secretary KC Tyagi said after the national executive meeting.

“The JD(U) is not a part of the NDA outside Bihar. We want to make the JD(U) a national party. The JD(U) is a recognised party in Bihar and Arunachal Pradesh. We will fight Assembly polls in of Delhi, Haryana, Jharkhand and Jammu & Kashmir with all our strength and might,” said Tyagi.

At the same time, trying to play down speculation that the JD(U) maybe planning to walkout of the NDA after it was given a “raw” deal in the Union Cabinet formation, Tyagi said JD(U) is very much a part of the NDA at the Centre and will contest the Bihar Assembly elections in 2020 under the NDA banner.

Kishor was seated next to Nitish Kumar and both had a meeting before the meeting started. There were clear indications that he continued to enjoy the confidence of Kumar even after he reportedly agreed to work for West Bengal chief minister Mamata Banerjee, a sworn enemy of the BJP, in the next year’s Assembly elections. The JD (U) leadership was obviously not averse to his decision even though it would upset the saffron outfit.

The Chief Minister and Kishor are understood to have agreed that the poll strategist’s organisation, I-PAC (Indian Political Action Committee) can go ahead with providing e professional assistance to the Trinamool Congress for the 2021 Assembly polls.

“The JD (U) has nothing to do with I-PAC. It is not a part of JD (U) either. Why was this question not raised when he (Kishor) worked for Jagan Mohan Reddy in Andhra Pradesh Assembly elections,” Tyagi said.

The I-PAC came into limelight in 2014 when it handled the campaign of Narendra Modi. A year later, Kishor worked as a poll strategist for the ‘Mahagathbandhan’ (grand alliance) in Bihar comprising the JD (U), RJD and Congress before moving his base to Punjab and Uttar Pradesh where he was actively engaged with Congress campaign.

Party chief Nitish Kumar had said on Saturday that “Kishor will come up with an explanation that answers all the questions.”

Asked whether Kishor explained before the party president about the issue of offering professional help to the Trinamool Congress, Tyagi said, “Kishor had a talk with Nitish Kumar on the issue and the matter has now ended.”

On the party’s stand on Article 370, uniform civil code and Ram Mandir, Tyagi said the outfit has already made its position clear on the issues which is in public domain.

“The JD (U)’s stand on Article 370 is well known that we are in favour of it. The party is also in favour of reforms such as uniform civil code but it (party) wants that all the stakeholders should be consulted before taking any final decision. The party chief had written a letter to the Law Commission chairman Justice BS Chauhan in this regard,” he said.

The party has always been of the view that the issue of Ram temple be either resolved through dialogue or court order, he said. Even Prime Minister Narendra Modi and RSS chief Mohan Bhagwat have said that the issue should be decided by the court, the JD(U) leader said.

“We will not compromise on these issues,” Tyagi said.

On the JD(U)’s course of action, if the BJP decided to implement its promise of abrogating Article 370, Tyagi said, “We will oppose the move while being in NDA, the way we did it on the issue of triple talaq (when the party voted against triple talaq Bill in the Rajya Sabha).”

When pressed further on the possibility of the JD (U) quitting the  NDA government, he reiterated, “We will continue to oppose it while being in NDA. It is your (media) wish that we should part ways.”