NRC in Bengal over my dead body, says Mamata

NRC in Bengal over my dead body, says Mamata 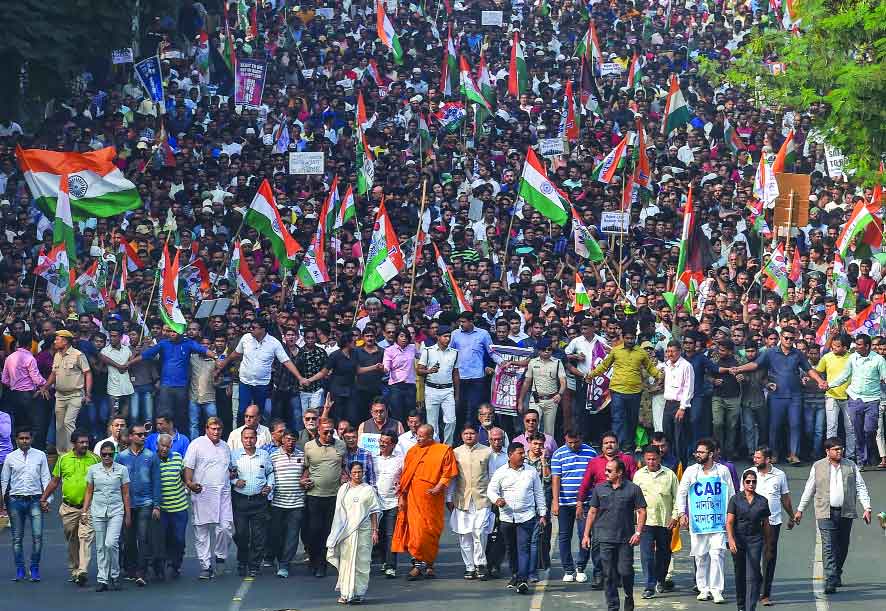 Even as burning tyres on roads, vandalised public facilities and cancelled trains symbolised the absolute bedlam that Bengal continued to be in on the third consecutive day of protest against the Citizenship Amendment Act (CAA), Chief Minister Mamata Banerjee on Monday said the Centre will have to implement CAA or National Register for Citizens (NRC) over her remains.

“I ask you all whether you have faith in your Chief Minister or not. If you trust me, there will be no NRC in Bengal. They (Centre) will have to implement it over my dead body. I will die but not let it happen in Bengal,” Mamata said while addressing the massive anti-CAA rally on Monday.

Launching a scathing attack on the BJP Government at the rally for pushing India into its “biggest crises” since Independence, Mamata said, “They think that only the BJP will live in India and all others will have to leave. This is their politics. It will never be allowed,” she said. However, the rally was promptly dismissed by State Governor Jagdeep Dhankhar as unconstitutional.

Showing how her counterparts in Delhi, Bihar, Kerala, MP, Punjab and elsewhere had all stood against the CAA and NRC, Mamata said, “Agar sab ka saath nahi hoga to sabka vikaas kaise hoga (how will there be a collective progress if we don’t take everyone along)?”

She said, “There was a time when I alone was raising my voice against the NRC, but today many other Chief Ministers like those of Bihar, Punjab, Kerala, MP … have started voicing their concern,” adding, “we are all citizens.

Our ideal is harmony of all religions. We won’t let anyone leave Bengal. We will live in peace and free of anxiety. We won’t allow NRC and CAA in Bengal. We have to maintain peace.”

Asking the people not to take law and order into their hands, she said there were some agents imported by the BJP (read All India Majlis-e-Ittehad-ul-Muslimeen of Aasduddin Owaisi) who were creating trouble in Bengal to bring Muslims to disrepute.

“Don’t fall into the traps of the imported agents from other States (Hyderabad) who are torching public properties and bringing Muslims to disrepute,” Banerjee said adding “we are all one and united and will continue our struggle peacefully.”

Just as Banerjee took out the massive rally condemning the  Centre’s “divisive politics” the State Governor dismissed her act as”unconstitutional” and advised her to concentrate on restoring peace rather than making pledges to break laws being a Chief Minister herself.

“I am extremely anguished that CM and Ministers are to spearhead rally against CAA, law of the land. This is unconstitutional. I call upon CM to desist from this unconstitutional and inflammatory act at this juncture and devote to retrieve the grim situation,” the Governor  who had on Sunday urged the Chief Minister to withdraw advertisements showing that the NRC and the CAA will not be implemented in the State tweeted.

Late evening reports from the State secretariat at Nabanna said the Chief Minister has written back to the Governor no to criticize her Ministers and senior officials at the hour of crisis and work together with the Government to bring peace in the State.

Meanwhile, the State BJP questioned the reason why Banerjee delivered her speech in Hindi if her main concern was those Bengali Muslims whom she felt could be displaced. “It is surprising why she delivered her speech in Hindi if the Bengali Muslims were her target audience. It seems that her intention was to make a point before the Urdu speaking Muslims who were primarily responsible for dividing India,” State BJP president Dilip Ghosh said.

As the politicians played to their respective galleries, Bengal continued to burn for the third consecutive day on Monday, causing great hardship to the general public. Reports of violence and blockades poured in from Nakashipara and Simurali in  Nadia where burning tyres were thrown on the roads to block traffic on NH-34 and Birbhum where the protesters blocked three roads for hours.

In South 24 Parganas protesters at Baharu and Dhabdhabi off Kolkata pelted stones at moving suburban trains. Both East and West Midnapore remained disturbed with protesters torching vehicles and blocking roads. At port town of Haldia trucks were halted for hours due to blockades. Railway sources said about 16 trains mainly going to North Bengal, Assam and Katihar in North Bihar had to be cancelled on Monday too owing to violence. Certain important trains to South like Coromondal Express and Humsafar Express were cancelled sources said.