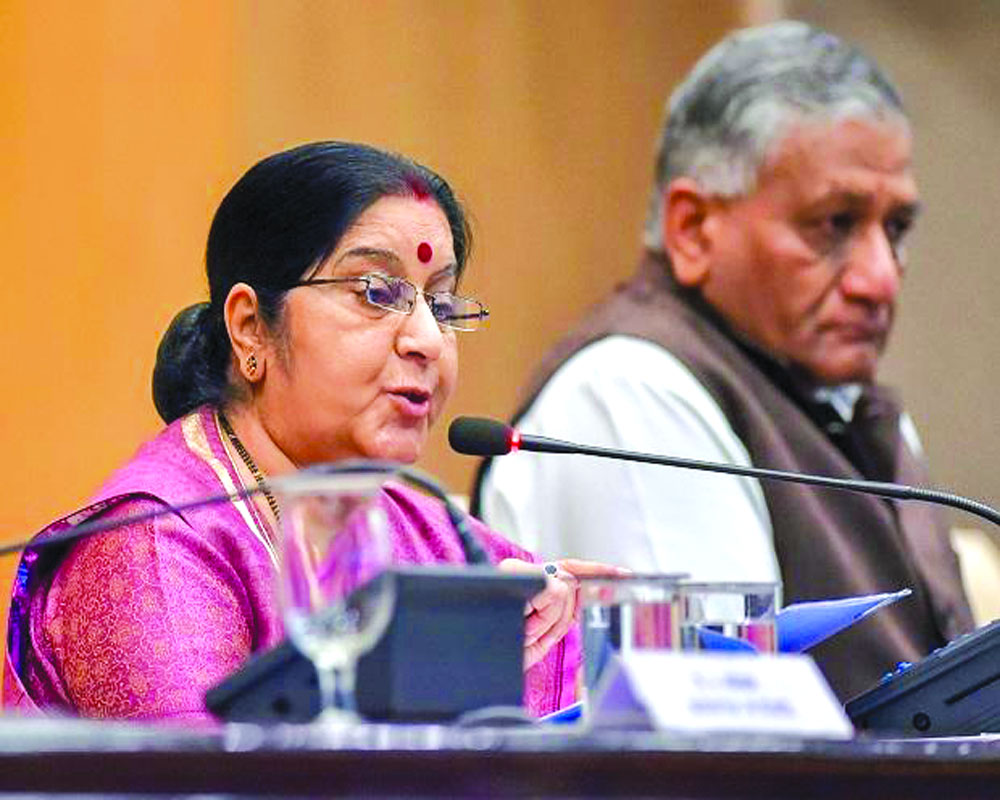 In first invite in five decades, Sushma to address summit in UAE as guest of honour

In a major diplomatic victory for India and a setback for Pakistan, the United Arab Emirates (UAE) has invited External Affairs Minister Sushma Swaraj to attend the Foreign Ministers’ meet of the Organisation of Islamic Cooperation (OIC), set to take place in Abu Dhabi on March 1-2. It is the first such invite by OIC to India in five decades. Sushma will be the “Guest of Honour” at the inaugural plenary session of the 46th meeting of OIC Foreign Ministers.

The Ministry of External Affairs (MEA) said here on Saturday Foreign Minister of United Arab Emirates Sheikh Abdullah Bin Zayed al-Nahyan invited Sushma as the ‘Guest of Honour’ to address the inaugural plenary and that India was happy to accept the invitation.

The move is seen as a major blow to Pakistan that has consistently opposed India’s entry into the grouping despite  its having the third-largest Muslim population in the world and strong relationship with West Asian and Muslim majority nations.

Over the past few decades, New Delhi has had, at best, a prickly relationship with the OIC, largely because Pakistan frequently used the platform to target India on the Kashmir issue. Pakistan and its allies in the Arab world have also blocked attempts to give “Observer” status to India.  The OIC has usually been supportive of Pakistan and, often sided with Islamabad on the Kashmir issue. The OIC is a 57-member grouping of Muslim majority nations.

The invitation to India by the OIC comes at a time when India has been mounting diplomatic offensive against Pakistan to isolate it internationally following the Pulwama terror attack in which 44 CRPF personnel were martyred. Pakistan based Jaish-e-Mohammed (JeM) claimed the responsibility of the Pulwama attack.

The MEA termed the OIC invite a “welcome recognition” of the presence of 185 million Muslims in India and their contribution to its pluralistic ethos, and of India’s contribution to the Muslim world.

“We see this invitation as the desire of the enlightened leadership of the UAE to go beyond our rapidly growing close bilateral ties and forge a true multifaceted partnership at the multilateral and international level,” the MEA said in a release.

“We see this invitation as a milestone in our comprehensive strategic partnership with the UAE.

Meanwhile, the Congress has expressed surprise that the Modi Government was celebrating the invitation to External Affairs Minister Sushma Swaraj for the OIC’s inaugural plenary, dubbing it a “misplaced euphoria” and a “futile exercise” to mislead the people of India. Senior party spokesperson Anand Sharma asked Prime Minister Narendra Modi and Sushma to respect the past position of India of not attending meetings of the OIC till it is accepted as a full member, given its large Muslim population.

“I am surprised at the Government celebrating the invitation to External Affairs Minister Sushma Swaraj to address the OIC meeting in the UAE. The euphoria is misplaced and it is a futile exercise to mislead the public opinion in India,” he said.

It was Qatar that first proposed “Observer” status for India at the OIC Foreign Ministers’ meet in 2002 in recognition of India’s significant Muslim population, but Pakistan had consistently blocked the move. Last year, Bangladesh proposed restructuring of the charter of the Organisation of Islamic Cooperation to pave way for the inclusion of non-Muslim countries having significant Muslim population like India as an “Observer State” of the 50-year old grouping.