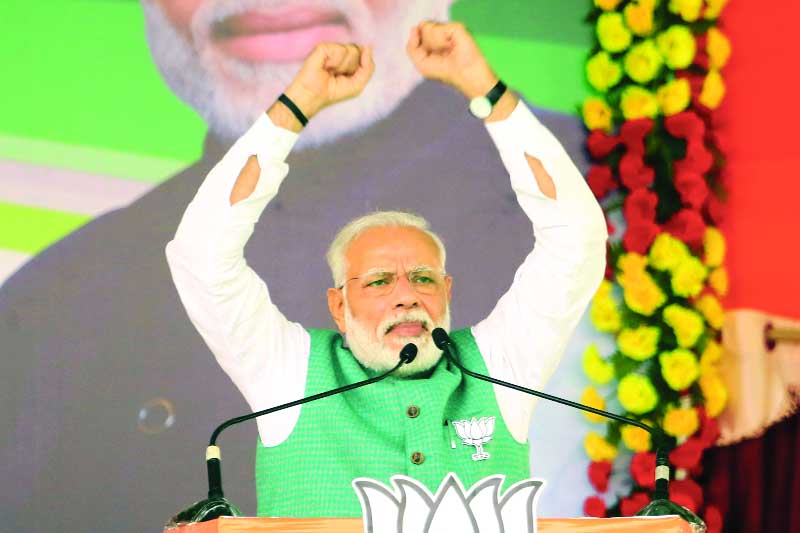 Prime Minister Narendra Modi on Sunday accused the Congress and its allies of raising a storm over the citizenship law and asserted that the Opposition parties were behind the unrest and arson in parts of the country.

Modi, addressing a rally in Dumka, said the Congress and its allies are creating a ruckus in North Eastern States and other parts of the country after Parliament passed the Citizenship Amendment Act (CAA). He said, “They are doing arson because they did not get their way. Those who are creating violence can be identified by their clothes itself. The work that was done by protesters on Pakistan’s money in London is now being done by the Congress.”

The Prime Minister accused the Congress of speaking the language of Pakistan on CAA and other important decision taken by his Government in last six months. Modi making a scathing attack on the Congress following the line of Pakistan assumes importance as this is for the first time that the PM has spoken against the Congress after Parliament passed CAA last week.

The Citizenship Amendment Bill, 2019, which provides a path to Indian citizenship for persons belonging to religious minority groups persecuted in Pakistan, Afghanistan and Bangladesh, was passed by Parliament on Wednesday, with the Rajya Sabha voting 125-99 in favour of the Bill.

After the passing of the Bill, many parts of country witnessed violent agitations in Assam, West Bengal and even at national capital as students of Jamia Millia Islamia University took to the streets to protest against the exclusion of Muslim immigrants from the provisions of new Citizenship Act.

Also, the Congress on Saturday had held a massive rally called “Bharat Bachao” at Delhi’s Ramlila Maidan attacking the Modi Government on a number of issues, including the economy, the Citizenship (Amendment) Act and women’s safety.

On the Opposition to the citizenship law, he said after seeing the quality protests in Northeast, it is clear that the decision was commendable and in the right direction.

The Prime Minister urging the protestors to end violence said that those having any doubts on CAA should sit and talk, but these people have embarrassed the country by demonstrating there.

Modi in Dumka also said the BJP Governments at the Centre and the State will continue to protect Jharkhand’s ‘jal’, ‘jungle’ and ‘jameen’, no matter what the opposition parties say.

“In Jharkhand, the institutes of higher education, engineering and medical studies like IIT, AIIMS were opened, this is also done by BJP,” PM Modi asserted.

The Prime Minister outlined the progress and development successes of the Jharkhand. He said, “Before 2014, the Chief Minister of the State used to claim the construction of 30,000 to 35,000 houses and described it as their achievement. But now we are moving forward with the resolve that every poor person in the country should have their own house.”

The battle of Dumka gains much importance for both BJP and JMM as there is huge stake in Santhal Pargana which goes to poll on December 20. Santhal Pargana is considered a JMM bastion as most of the MLAs are from this region. JMM executive president Hemant Soren too is contesting from two seats - Dumka and Barhait.

The region which was synonymous with JMM chief Shibu Soren as he had represented Dumka parliamentary seat eight times, however, in Lok Sabha election this year, BJP made a successful dent in JMM bastion as BJP candidate Sunil Soren defeated senior Soren in Lok Sabha election.