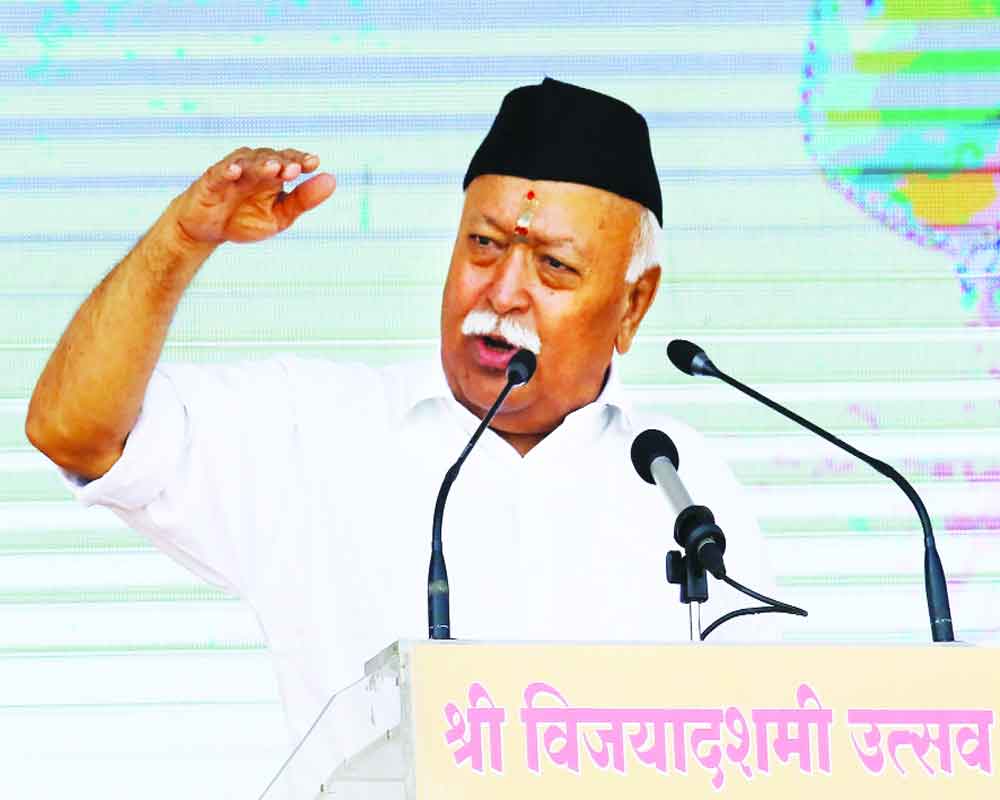 Rashtriya Swayamsevak Sangh Chief Mohan Bhagwat said on Tuesday that while his organisation had never supported those involved in attacks against members of other community, branding incidents of mob violence as “lynching” are efforts to defame the country and the entire Hindu society and also to create fear among the minority community members.

Addressing the annual Vijayadashmi rally at the RSS headquarters in Nagpur,  Bhagwat said, “Nowadays, there have been reports that members of a community in our society have been attacked by another community, making them victims of social violence....The Sangh has never supported the people who were involved in such incidents and it stands against each and every such incident.”

“Swayamsevaks are working in this direction so that such incidents do not take place. But by branding such incidents by the words like lynching, denoting the traditions which were alien to Bharat and belong elsewhere, efforts are underway to defame our country and the entire Hindu society and create fear among the so-called minority communities,” the RSS chief said.

The RSS chief said there were reports of incidents happening on both the sides, involving allegations and counter allegations. “Some incidents have been deliberately fabricated while some others have been published in a distorted manner,” he said.

“However, it must be accepted that these tendencies of violence have somehow or the other crossed the limits of the law and order and wreaked havoc by eroding the mutual relations in the society,” the RSS chief said.

Lamenting that the prevailing state of social unity, equality and harmony in Bharat was not up to the desired level, Bhagwat charged that such forces who did not want the country to be strong and vibrant, were taking advantage of the situation.

“Diversities of caste, creed, language and region are being used to separate one from another; turning them to differences; widening the fault-lines already existing in the society; imposing fabricated identities on manufactured separations, thereby creating diverse and conflicting streams in the national mainstream,” he said.

Bhagwat said that while the people had to understand conspiracy was being hatched create clashes between the two communities, “everyone should keep away from talking in provocative language or indulging in provocative acts”.

“Removal of Article-370 has been already in the thought of the ruling party. But this time by skilfully garnering the support of other parties in both houses, with strong logic and plea in consonance with public sentiment the work was accomplished, for which the members of the ruling party, including the Prime Minister and Home Minister, and other political parties who upheld the public sentiments in Parliament deserve congratulations,” Bhagwat said.

“This effort will come to fruition only when justice denied under the influence of Article 370 is restored, injustices occurred are brought to an end. It will happen when our Kashmiri Pandits who were unjustly driven away are brought back and rehabilitated and allowed to remain secure, fearless, patriotic and Hindu,” he said.

Alluding to Chandrayaan-2 mission,  Bhagwat said: “Although the mission did not attain full success as expected, achieving so much in the first attempt itself is a feat not accomplished so far by the entire world. Due to this daring mission of our scientists, the world’s admiration for our country’s intellectual genius and scientific prowess and commitment to realise the goals through hard work has increased”.

“The matured intellect and action of the people, an awakened sense of pride in the country and firm commitment of the government along with experience of our scientific expertise- all these pleasant feelings have made the last year memorable forever, “ he said.

Dwelling on the economic recession prevailing across the world, Bhagwat said: “Slowing down of the world economy has left its impacts everywhere. Many countries including Bharat have to suffer the resultant of the ongoing global trade war between the US and China”.

Expressing confidence that the country would definitely come out of recession, Bhagwat said: “The Government has taken many initiatives to tide over the situation in the last one-and-a-half months. This gives a definite indication of the government’s sensitivity towards people’s interests and its prompt and proactive attitude. We will definitely come out of this cycle of so called recession”.

Averring that those leading our economy were competent enough, he said that to strengthen the economy, the government had to take steps such as allowing Foreign Direct Investment and disinvestment of industries.

Bhagwat, however, had a word of caution for the Government when he said that while implementing many government schemes and welfare policies at the lower level, more alacrity and efficiency and avoiding unnecessary stringency could set many matters right.