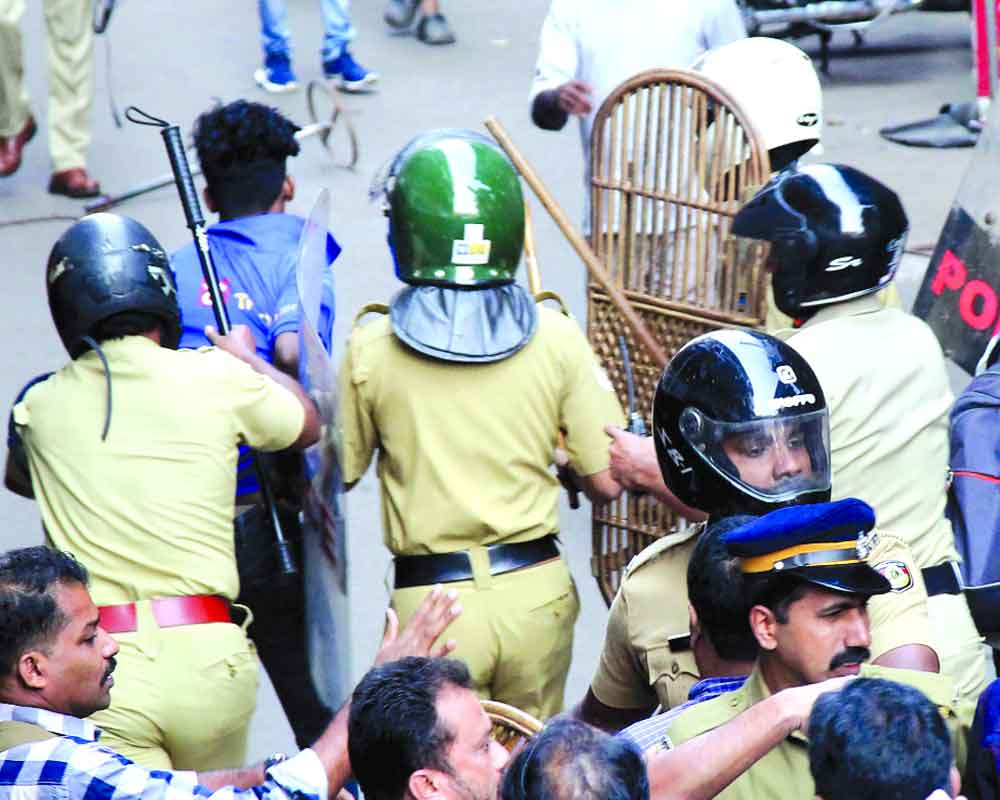 One person was killed and several others injured in Thursday’s dawn-to-dusk strike called by Sabarimala Karma Samithi, an umbrella organisation of pro-Hindutva groups, and the Antarrashtriya Hindu Parishad (AHP), to protest the entry of two women of reproductive age into the Sabarimala temple on Wednesday.

In Thrissur, three BJP activists were stabbed during a scuffle with workers of the Social Democratic Party of India (SDPI), the political wing of Popular Front of India, a militant Islamic outfit, police said. The incident occurred when saffron party workers attempted to force a restaurant to down the shutters.

Chandran Unnithan, 55, was killed in stone pelting while he was leading a rally late on Wednesday. While hartal supporters alleged that Unnithan died in stone-pelting by CPI(M) activists, Chief Minister Pinarayi Vijayan blamed the violence on “elements” associated with Sangh Parivar and alleged that they were trying to foment trouble in Kerala under the pretext of saving Sabarimala.

Governor P Sathasivam has sought a report on the law and order from the Chief Minister following widespread rioting and stone pelting by pro and anti hatrtal activists all over the State. “I appeal to all sections of people to maintain calm,” Sathasivam said.

As tempers ran high in Kerala, the Supreme Court on Thursday refused to urgently hear a contempt petition moved by a lawyers’ group against the Sabarimala temple authorities for closing the shrine for purification after two women entered it. A Bench of Chief Justice Ranjan Gogoi and Justice SK Kaul said

that the contempt petition will be heard along with the pending review petitions against the apex court verdict which allowed women of all age groups to enter the Sabarimala temple.

Nearly 300 persons, belonging to various Hindutwa outfits have been arrested in the State in connection with widespread attacks on buses, public places and journalists during the hartal on Thursday.

According to sources in police headquarters at Thiruvananathapuram, the number of arrests would be more as some of the attackers and rioters have gone underground.

Tomin Thachankery, the managing director of the State-owned KSRTC, said in a release late on Thursday that 100 buses belonging to the corporation were damaged in stone pelting by rioters. “We have suffered losses to the tune of Rs 3.35 crore in the attacks by the protesters over the last two days,” said Thachankary.

The Kerala Police has launched “Operation Broken Window” to nab the persons responsible for stone pelting and rioting. Though the police had promised protection to those who open shops and business establishments, the help was not forthcoming, thus forcing the owners to pull down the shutters for the day.

Mediapersons too came under the attack of the organisers of the hartal. Two reporters and a videographer belonging to two new channels were injured in the attack while the camera of one of the channels was damaged. The media persons who were upset over the attacks blacked out the press meets addressed by K Surendran, the general secretary of the BJP and Sasikala, the SAC leader.

Addressing the media at Thiruvananthapuram on Thursday morning, Vijayan took strong exception to the decision of the Sabarimala Action Committee to call for hartal. He claimed that the two women entered the sanctum of the temple because of the cooperation extended by devotees and the police had no role in it. “We were asked to provide them with police security and we were bound by the Constitution to do so,” said Vijayan.

Vijayan lambasted the Thanthri (chief priest) of Sabarimala for ordering the closure of the temple for performing purification rituals after the entry of the two women. “This is rare and unheard of. If the Thanthri was against the verdict of the Supreme Court, he should have quit his job immediately. We will certainly take action against him for conducting the purification rituals,” said Vijayan.

But the Chief Minister’s remarks about the death of Chandran Unnithan, the Ayyappa devotee at Pandalam, caused wide resentment in the State. Vijayan said Unnithan died because of heart attack while autopsy report from Kottayam Medical College stated that the victim died because of the severe injury suffered on his skull.