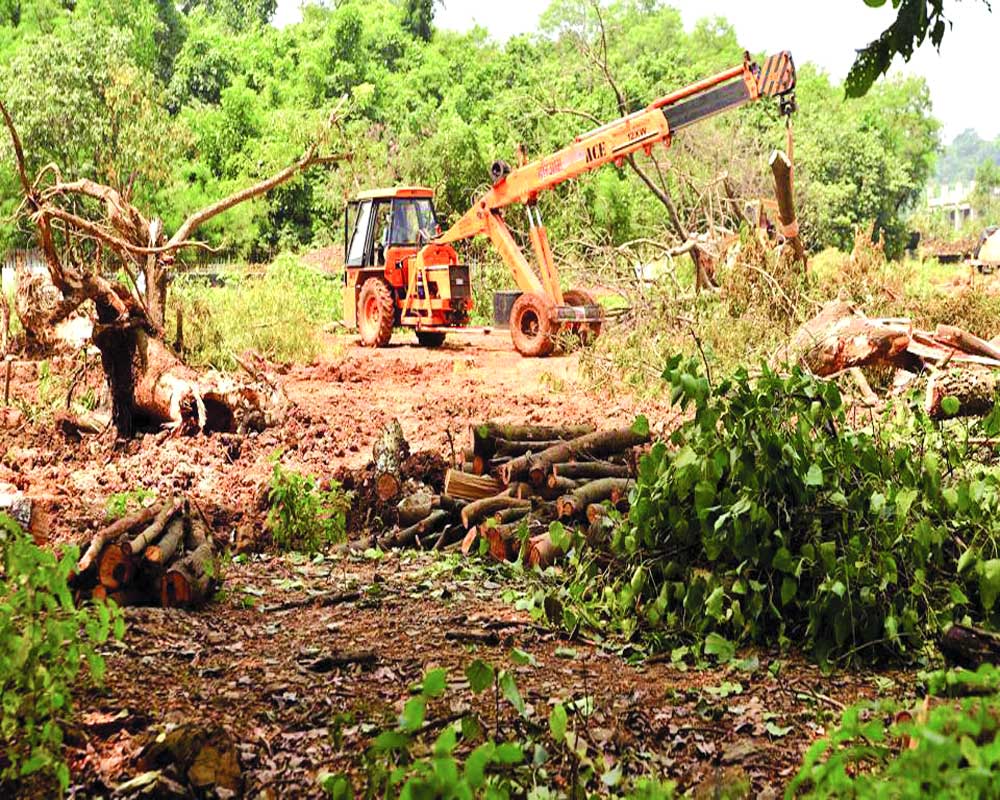 The Supreme Court on Monday restrained authorities from cutting any more trees in Mumbai’s Aarey colony for a Metro car shed, but the order came too late to save what is known as the  ‘lung of the city’. The  Maharashtra Government told the court that whatever was required to be cut has already been done.

According to report, aware of the SC hearing the  Mumbai Metro Rail Corporation (MMRCL) deployed an army of personnel to  cut the trees throughout the night.

The speed with which the authorities  carried out the task is amazing. Only three days ago on October 4, the  Bombay High Court refused to declare Aarey colony a forest and declined to quash the Mumbai municipal corporation’s decision to allow felling of over 2,600 trees in the green zone to set up a Metro car shed.

Despite massive protest by green activists and local residents, the Government cut down nearly 3,600 trees in three days and didn’t wait for the SC hearing. The MMRCL started cutting the trees from Friday night to make way for the car shed triggering angry protests, hours after the High Court dismissed four petitions filed by NGOs and activists challenging the decision.

A specially constituted Bench gave the stay order after the apex court took suo motu (on its own) cognisance of a  petition addressed to Chief Justice of India Ranjan Gogoi by law student Rishabh Ranjan seeking a stay on felling of trees in the colony. The apex court is on a week-long Dussehra break from Monday.

As many as 29 protesters were arrested for allegedly obstructing and assaulting police personnel during the felling of trees. They were released from jail in the wee hours of Monday after being granted bail by a local court, officials said. Mumbai Police have also relaxed prohibitory orders imposed in the Aarey Colony and its surrounding areas.

Solicitor General Tushar Mehta, appearing for Maharashtra and Mumbai’s civic body, told the special Bench of Justices Arun Mishra and Ashok Bhushan that whatever was required to be cut for the Metro car shed has already been done and they would not fell any more trees.

“We will decide this. Do not cut more trees,” said the Bench, adding, “Do not cut anything now.” It further said, “As undertaken, status quo be maintained till the next date of hearing with respect to cutting of trees.” Tushar Mehta, Solicitor General appearing for Maharashtra, has stated that they are not going to cut any further trees till the next date of hearing. In the circumstances, the statement is quite fair.

The court said the Bench would take up the matter for further hearing on October 21. Opposition NCP leader Supriya Sule welcomed the apex court order but said what was worrying was the admission of the Maharashtra Government  that the necessary number of trees have already been cut.

Shiv Sena — which is an ally of the ruling BJP but has been opposing tree felling in the city’s green belt — said the court order is a “moral victory” for environmentalists. Sena spokesperson Maneesha Kayande said it’s the Government’s “mistake” not to declare Aarey area as a forest and rued that nearly “2,100 trees” have been cut in two days.

The Metro authorities have defended tree felling by contending that it is restricted only to a small area in Aarey colony and is necessary to ensure a modern transport system for Mumbaikars. The apex court said it would have to examine as to whether the entire Aarey area was a forest area or eco-sensitive zone and asked the authorities to place on record the relevant notifications and status of sampling of trees planted by them. Aarey forest is located adjacent to the Sanjay Gandhi National Park and has five lakh trees, according to the letter petition.

Senior advocate Gopal Sankaranarayanan, appearing for one of the petitioners before the Bombay High Court, said States are required to notify an area as forest as per an earlier direction of the apex court but Maharashtra has still not done so.

He said Aarey forest was deemed as an 'unclassified forest' and felling of trees in the eco-sensitive zone there was illegal.

However, after perusing the notification issued by the Maharashtra Government, the Bench said, Aarey area is "a no development zone" and not a eco-sensitive zone as claimed by the petitioner.

Construction activity cannot be carried out in a 'no development zone'.

Senior advocate Sanjay Hegde, appearing for the letter petitioner, told the Bench that "the court has been presented with a fait accompli".

Mehta said the entire area of Aarey is of around 3,000 acres and only two per cent, that is 33 hectares, was given for the metro shed project.

"That is not the issue whether you are using one or two per cent of the area. If it is legally not permitted, then it will not be permitted," the bench said.