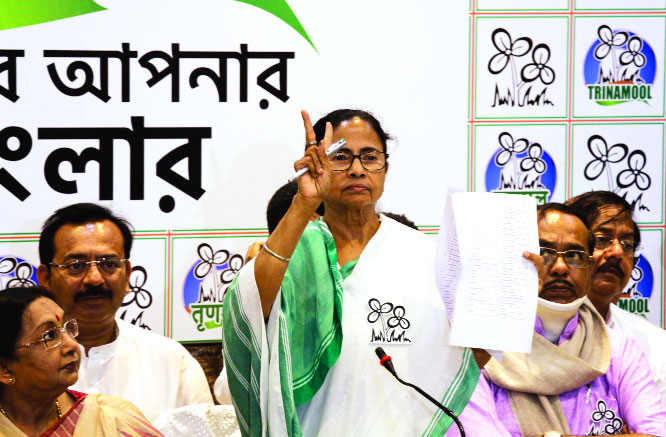 West Bengal Chief Minister and TMC chief Mamata Banerjee on Tuesday released the list of party candidates for all the 42 Lok Sabha seats in the State. The TMC has sent out a message to the women electorate earmarking 41 per cent seats for them.

Among other features of the TMC list are five faces from Bengal cine world.

Besides, the party has dropped five sitting MPs from its candidates’ list. Among the MPs dropped or who have opted out are Jadavpur MP Sugato Bose who is also the grand nephew of Netaji Subhas Chandra Bose, South Kolkata MP and State TMC president Subrato Bakshi, Basirhat MP Idris Ali, Midnapore MP and veteran Bangla actor Sandhya Roy, and Uma Soren.

The TMC has five actors in its list. Bangla superstar Deb, Birbhum MP Shatabdi Roy and Bankura MP Moon Moon Sen will contest for second, third and second time in that order. Sen will be fielded from Asansol against BJP leader and Minister Babul Supriyo.

While releasing the party’s candidates’ list on Tuesday, Bengal Chief Minister Mamata Banerjee said her party had decided to field candidates in Assam, Jharkhand, Odisha and Bihar. When asked as to whether this could pose problem for anti-BJP parties, Banerjee said TMC being a national party reserved its right to contest from anywhere adding “if the Congress can contest from multiple States why can’t the TMC. We will contest in a manner that it will not harm other parties”.

TMC will contest from Jamshedpur, Rajmahal, Ranchi and Dhanbad in Jharkhand, Karimganj, Silchar, Dhubri, Kokrajhar, Barpeta and Guwahati in Assam, Bhadrak and Bhubaneshwar in Odisha and Kishanganj and Maharajganj in Bihar, she said.