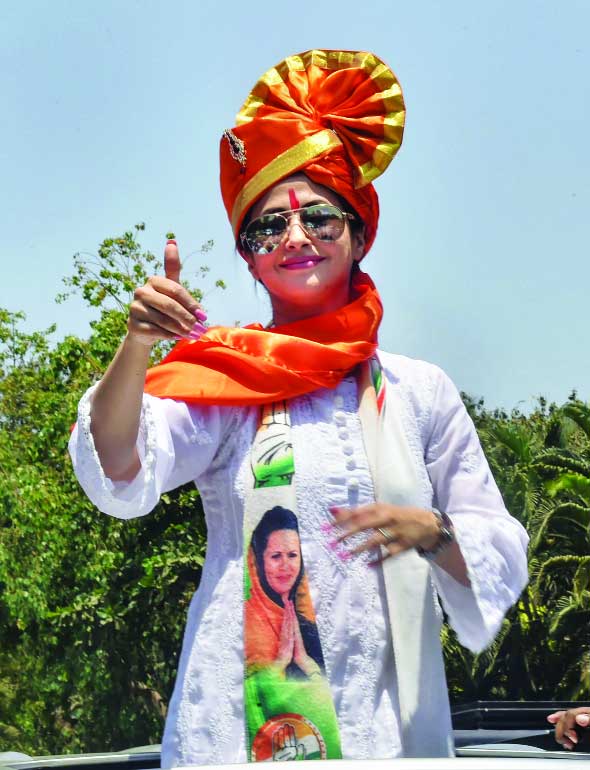 Miffed with “an act of blatant betrayal” and the “petty in-house politics” in the party’s Mumbai unit, Bollywood actress Urmila Matondkar resigned from the Congress, in what came as a setback to the 134-year-old party ahead of the Maharashtra Assembly polls due next month.

“I hereby resign from Indian National Congress as a member and from any post held in the INC. I thank you for giving me the opportunity to work for INC,” Matondkar stated in her two-line letter sent to Sonia on September 7 — a copy of which was released to the media on Tuesday.

Later in a statement released to the media, Matondkar expressed her displeasure over the lack of action on the issues raised by her in her letter dated May 16 addressed to then Mumbai Congress president Milind Deora and said the leak of letter containing the “privileged and confidential communication” to the media was an “ act of blatant betrayal”.

Matondkar, who had in her leaked letter had spoken about the “failure” of party leadership at local level to coordinate and mobilise workers at grassroots and to provide proper resources to her to fight the elections, said “...it is obvious that the key functionaries of Mumbai Congress are either unable or not committed to bring about a change and transformation in the organisation for betterment of the party”.

“My political and social sensibilities refuse to allow vested interests in the party to use me as a mean to fight petty in-house politics instead of working on a bigger goal in Mumbai Congress,” Matondkar said.

Matondkar -- who in her letter had accused two close associates of former Mumbai Congress president Sanjay Nirupam of a “total lack of coordination, honesty and efficiency, ensuring a disastrous outcome” --- said: “Needless to say, no one from the party was apologetic or even concerned towards me for the same despite my repeated protests”.

“Significantly, some of the persons specifically named in my letter for the shoddy performance of INC in Mumbai north were rewarded with newer positions instead of holding them accountable for their acts and omissions,” she said.

“I stand by all my thoughts and ideologies and will continue to work for people to the best of my capacity with honesty and dignity,” she said in her statement.

It may be recalled that Matondkar joined the Congress after meeting then Congress president Rahul Gandhi in New Delhi on March 27 this year. The Congress nominated her as it candidate from the Mumbai North Lok Sabha constituency.

Despite being new to politics, she campaigned well. However, she lost the elections to BJP’s Gopal Shetty by a whooping margin of 4.65 lakh votes. While Shetty polled 7,06,678 votes, she secured 2,41,431 in the polls.

In her May 16 letter, she hit out at Sandesh Kondvilkar and Bhushan Patil, close associates of Nirupam, a former Mumbai Congress president, for their conduct in the elections.

Apart from accusing Kondvilkar and Patil of “total lack of coordination, honesty and efficiency, ensuring a disastrous outcome”, Matondkar also blamed the local leaders for their failure to mobilise workers at grassroots and raise resources for her campaign.

Among other things, she said that the joint poll rally addressed by senior Congress leader Mallikarjun Kharge and NCP chief Sharad Pawar in suburban Borivali in April was organised in an “extremely shoddy” manner, bringing huge personal embarrassment for her.