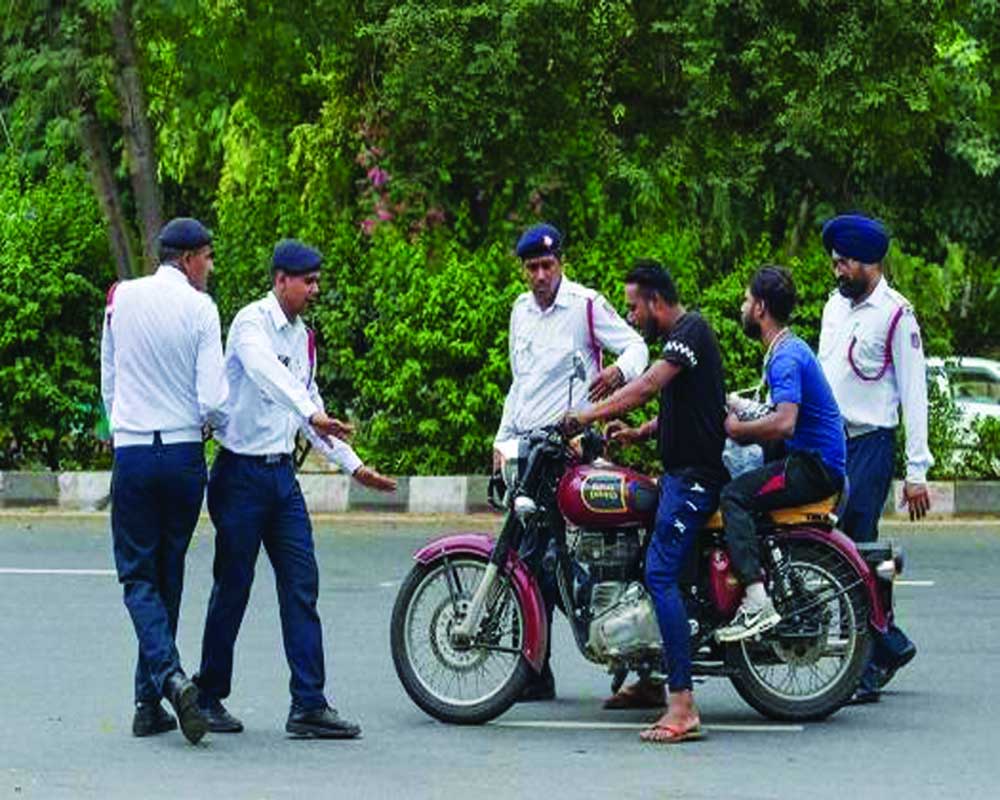 Amid massive protest over the new penalties for traffic offenders, the enforcement agencies in Motihari in Bihar have started providing on the spot helmet and vehicle insurance, while Gujarat has reduced the penalty notified under the new Motor Vehicles Act and  Odisha has frozen  the new regulations for about three months.

The traffic police of Motihari are not imposing fine but ensuring that the commuters take corrective measures right on the spot itself.

“If you are caught without helmet or a lapsed insurance paper, you will be directed to vendors selling helmets and insurance policies nearby. We roped in some helmet sellers and insurance agents who have set up stalls beside the checking points. Riders are not being fined as that makes them feel like they are offenders. Instead, they are made to purchase good quality helmets and get their insurance renewed,” said a police official of Motihari.

The officer said he has also requested the District Transport Officer to depute an official who could issue learner’s licence on the spot to offenders riding without it.

Meanwhile, the Chief Minister of BJP-ruled Gujarat, Vijay Rupani, said the fines laid down in the new Act were the maximum suggested and his Government had reduced them after detailed deliberations.

While the new Act stipulated a fine of Rs 1,000 for riding without a helmet, the Gujarat Government on Tuesday finalised the amount at Rs 500. Similar is the case with driving a four-wheeler without wearing a seat-belt.

The penalty for driving without a licence has been brought down from Rs 5,000, as suggested by the new Act, to Rs 2,000 for two-wheelers and Rs 3,000 for four-wheelers.

Claiming that the Gujarat Government was not showing leniency to traffic violators by reducing fines, Rupani pointed out that penalties fixed now are still up to 10 times of that charged before the new Act came into force.

The Motor Vehicles (Amendment) Bill 2019 was passed by Parliament in July and its steep fines were to come into effect from September 1, though some States pushed it back saying people needed time to get acquainted with the enhanced penalties.

Similarly keeping in view the rising public resentment across the state, the Odisha government relaxed implementation of the new traffic rules for three months. The government also said it would soon consider reducing the fine amounts.

Chief Minister Naveen Patnaik, ordered the three-month relaxation as a way to allow people time to comply with the traffic norms.

So far at least nine states and Union territories, including Gujarat, Karnataka, Kerala, Tamil Nadu, Odisha, Bihar, Jharkhand and Haryana have implemented the amended Motor Vehicles Act in totality by notifying the compoundable offences and the rest including Delhi and West Bengal are buying time working out ways to see if they can soften the blow somewhat for violators.

“Most of the states are in dilemma whether to notify lower fines for compoundable offences. There are 24 compoundable offences under the revised MV Act, which means in these cases the offender can pay the fine on the spot and doesn’t need to go to court. But most of the states have not yet notified the designated officers who can compound the offences on the spot,” said a senior Road Transport Ministry official.