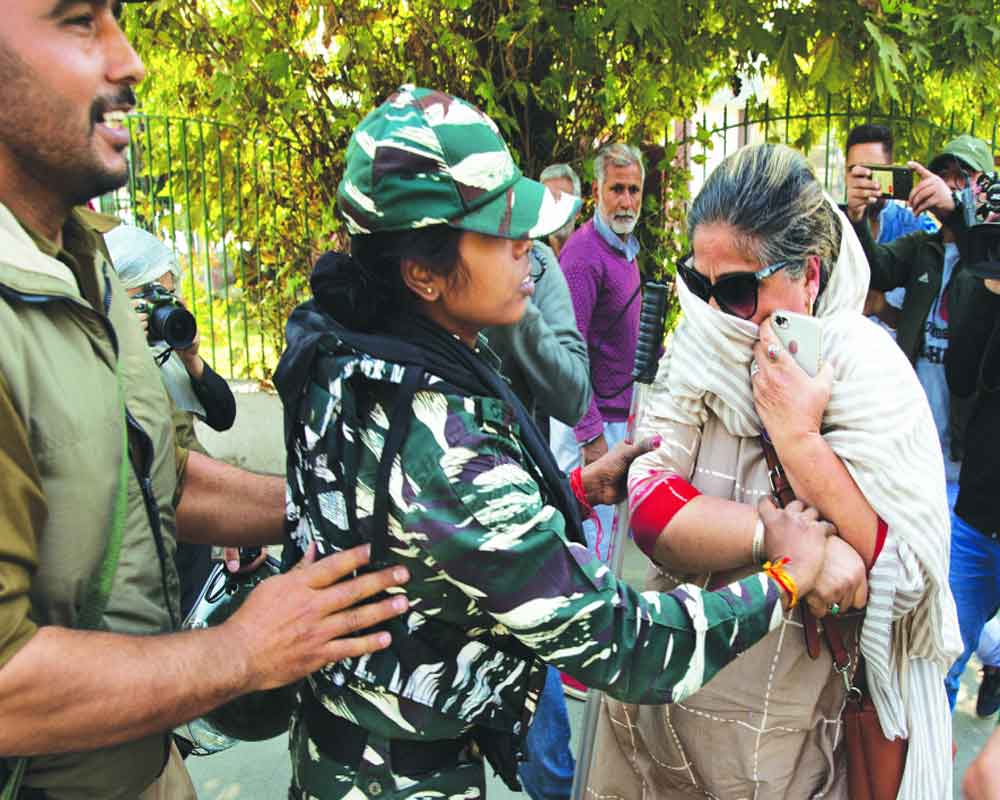 The police on Tuesday detained a  small group of women led by daughter and sister of National Conference president and sitting Member Parliament Farooq Abdullah in Srinagar when they tried to stage an “unathorised” sit-in protest against the abrogation of Article 370 and bifurcation of State into two Union Territories.

Safiya Khan was seen carrying a banner reading “Kashmiri brides not for sale”, apparently implying to the statement made by some BJP leaders of Haryana and UP after the abrogation of Article 370. Other protesters were seen holding placards which demanded the release of detainees and restoration of civil liberties.

As they started assembling inside the Pratap Park, women cops, along with paramilitary forces, prevented them from staging sit-in dharna. The cops also demanded them to produce permission letter, if any, issued by the office of District Magistrate.

When these women refused to call off the dharna, women cops pushed them inside the police vans before escorting them to the nearest police station.

In a written statement, these women said, “We the women of Kashmir disapprove the unilateral decision taken by the Government of India to revoke Article 370 and 35A and downgrade and split the State of Jammu & Kashmir. We feel betrayed, humiliated and violated as people.”

“We demand immediate release of detainees. We express our outrage against the national media for their false and misleading coverage of ground realties in Kashmir,” reads the statement.

Meanwhile SMS services were withdrawan by the State administration barely hours after the postpaid mobile phone services were restored across the Valley on Monday.  The decision was taken after review of the prevailing security situation arising after the killing of a truck driver hailing from Rajasthan by a group of terrorists in Shopian late on Monday evening.