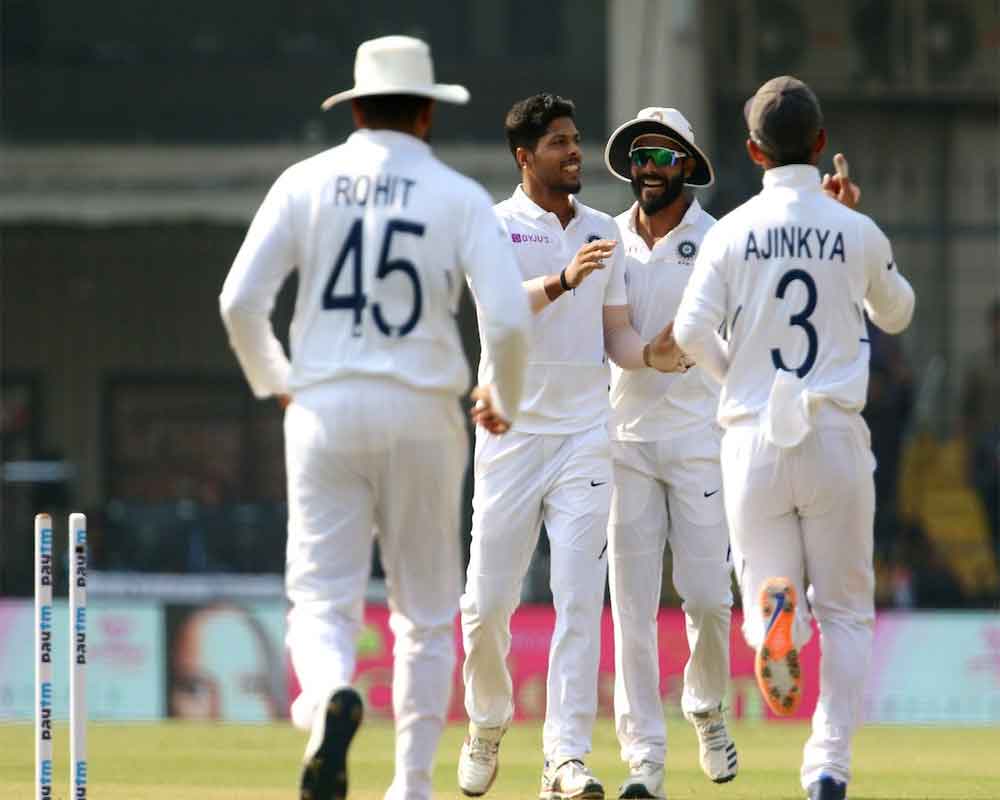 India remained on course for a big innings victory after their pacers blew away the Bangladesh top-order, reducing the visitors to 60 for 4 at lunch on the third day of the first Test here on Saturday.

India declared their first innings at overnight score of 493 for 6 to let their pace attack make effective use of the conducive conditions. Bangladesh are now 283 runs behind India's first innings score.

Having conceded a 343-run first innings lead to India, it was another horrendous start by the battered Bangladeshi batsmen in their second essay as Umesh Yadav (1/30 in 8 overs), Ishant Sharma (1/15 in 9 overs) and Mohammed Shami (2/8 in 5 overs) kept the visiting batsmen on tenterhooks.

It was Umesh's perfectly pitched outswinger (inswinger for left-hander), that got rid of Imrul Kayes (6), who looked like getting out to every delivery that he faced. The ball tailed in and uprooted the leg-stump.

Young Shadman Islam (6) was beaten by both pace and movement with Ishant getting one to nip back from length as it hit the top of middle-stump.

Bangladesh's best bet, skipper Mominul Haque (7) was jittery from the start and survived a DRS call while trying to leave a delivery pitched on off-stump. However, when Mohammed Shami angled one into him, Mominul was adjudged plumb in-front even though Virat Kohli had to take a review which was successful.

Shami then hurried Mohammed Mithun (18) with a beautiful short ball that he grew big on him as he tried to play the pull shot. The result was a simple catch to Mayank Agarwal at mid-wicket.

The two senior-most players Mushfiqur Rahim (9 batting) and Mahmudullah (6 batting) shakily continued till the lunch session to delay the inevitable.

It could have been five-down had Rohit Sharma not dropped Mushfiqur in a regulation catch in the second slip off Shami's bowling. The catch was coming straight towards Kohli but Rohit instinctively moved towards left and it popped out of his hands.