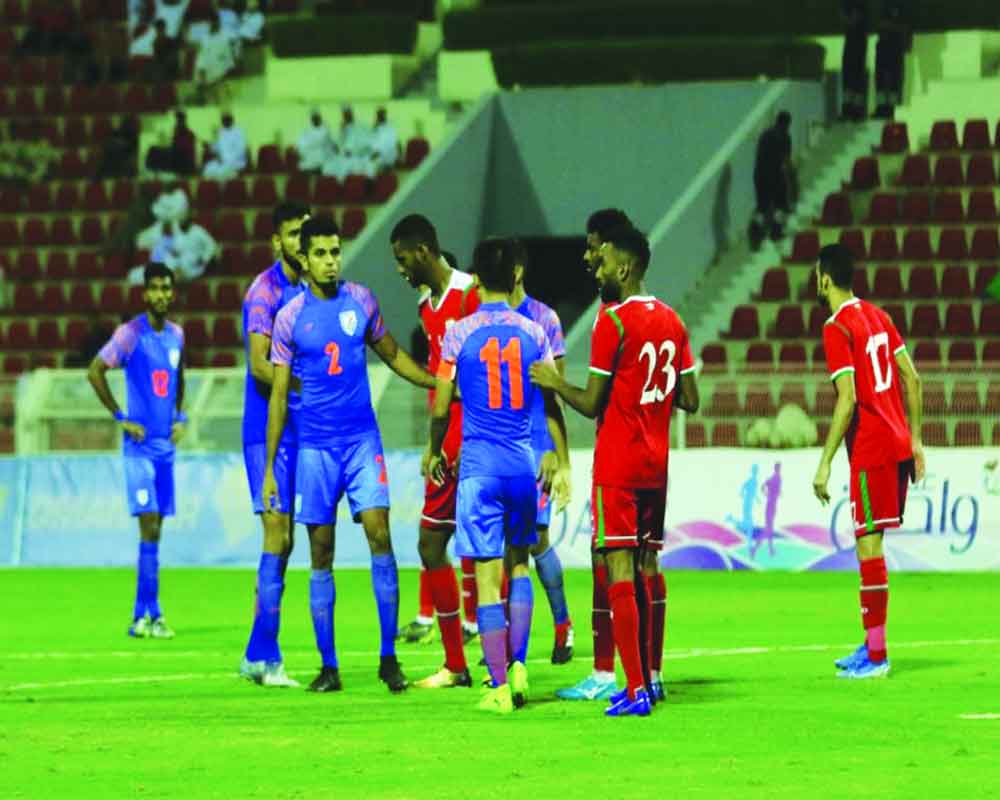 India went down to Oman by a solitary goal in the FIFA World Cup Qatar 2022 Qualifiers at the Sultan Qaboos Sports Complex Stadium in Muscat on Tuesday.

Muhsen Al Ghassani scored in the 33rd minute for the home team as India now stand at three points from the five games.

It was the hosts who had the upper hand in the initial exchanges of the first half. Oman could have taken the lead in the seventh minute but Muhsen Al Ghassani’s spot-kick was off-target after he was brought down in the penalty area by Rahul Bheke.

The first chance for the Indians came in the 20th minute after Udanta Singh earned a free-kick. Brandon Fernandes curled in the ball towards the far post and found Chhetri, whose cross was intercepted by Oman custodian Ali Al Habsi.

Three minutes later, Nishu Kumar — making his first appearance under head coach Igor Stimac — surged into the Omani penalty box after a one-two with Udanta down the right flank but his dangerous-looking centre was cleared away.

Adil Khan and Pronay Halder went into the referee’s book in the 24th and 25th minutes respectively, with the latter being replaced by Vinit Rai a few minutes later.

Three minutes after the half-hour mark, Oman took the lead through Al Ghassani. Mohsin Al Khaldi played in a through-ball behind the Indian defence and the forward put into the Indian net with a first-time finish.

In the 37th minute, Anas Edathodika came on in place of Adil Khan in the heart of the Indian defence and came up with a couple of timely clearances straight upon his arrival.

Five minutes before half-time, Gurpreet Singh Sandhu produced a sharp save at his near post from a corner and on the break, Udanta caused serious problems for the opposition defence with his pace. Charging down the left, he crossed the ball for Manvir — whose layoff found Farukh Choudhary in the box. However, he was tackled on time before he could pull the trigger.

Changing over, the Blue Tigers came out with more intent, creating multiple crossing opportunities from the flanks.

Gurpreet Singh Sandhu was called into action in the 64th minute, denying Al Khaldi with a fine save to thwart a free-kick from 25 yards out, which was on target, and palm it off for a corner. He also kept his side in the game with a brilliant save from close range, denying Ali Al Busaidi with a one-handed stop in the 82nd minute.

Towards the end, India had a couple of close moments when Ashique Kuruniyan charged down the left and caused problems for the home defence. However, the equalizer remained elusive.