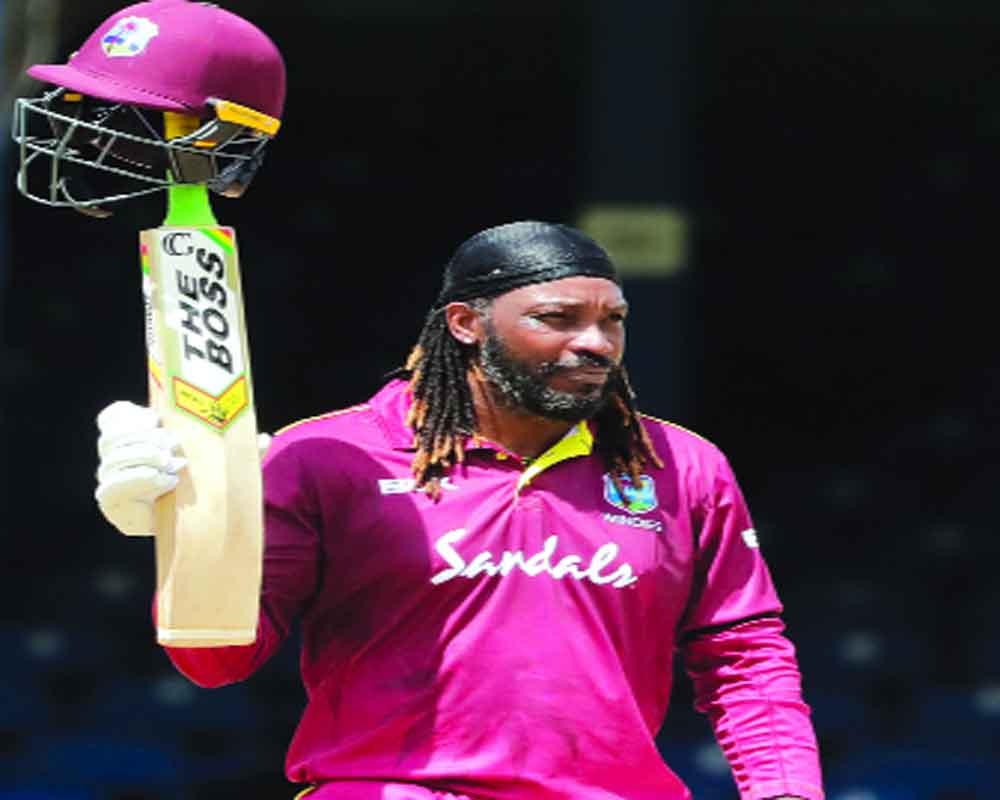 Chris Gayle seems to have walked into the sunset after playing a typical aggressive knock that led West Indies to 158 for two in 22 overs against India before rain halted the third and final ODI here on Wednesday.

The weather continued to play havoc in this tour of India as the rain forced two interruptions after the hosts elected to bat in the match, which they need to win to level the series.

The match was reduced to 35-overs a side when the game resumed with Shai Hope (19) and Shimron Hetmyer (18) at the crease.

Gayle came out with a clear plan to attack the Indian bowlers, making the most of what appeared his swan-song innings for his country.

Whether it was Bhuvneshwar, Shami or Khaleel Ahmed no Indian pacer was spared with Gayle hammering them for sixes with remarkable ease.

Spinner Yuzvendra Chahal was the only bowler who commanded some respect from the West Indian marauder.

The left-handed opener — the self proclaimed Universe boss — punished the Indian bowlers with five sixes and eight shots to the fence in his entertaining 72-run knock.

He added 115 runs with fellow opener Evin Lewis, who was equally impressive with his 29-ball 43 which was laced with five fours and  three sixes.

It was Chahal who brought some relief for the Indian camp by dismissing Lewis and soon Gayle too departed by hitting one straight to rival captain Virat Kohli at mid-off.

Soon after his dismissal, the Indian players rushed towards Gayle, shaking hands with him. Kohli even did Gayle typical jig before the burly West Indian walked off.

After hitting one off Khaleel Ahmed straight to visiting skipper Kohli, under whom he played at the Royal Challengers Bangalore, Gayle smiled as Indian players shook hands with him. Indian players even did Gayle’s typical jig with him.

Gayle threw his bat in the air, put his helmet on top of it and walked off the field. He then hurled the helmet up in the air and caught it while approaching the boundary ropes.

The West Indian camp gave him a standing ovation.

In his entertaining ODI career, Gayle competed in 301 matches and accumulated 10480 runs with 25 hundred and 54 half-centuries.

Gayle has not played in Test cricket for many years. He wanted to turn out for one last Test when India play the series-opener in Jamaica after the ODI series, but the selectors did not name him in the West Indies squad.

He also did not play in the preceding three-match Twenty20 series.

Gayle also experimented with his jersey number as the West Indies great sported ‘301’ in the 3rd ODI against India at the Queen’s Park Oval.

He is now the most-capped West Indies player in ODIs as the big-hitting opener went past Brian Lara’s mark of 299 ODIs during the second ODI of the ongoing series on Sunday.