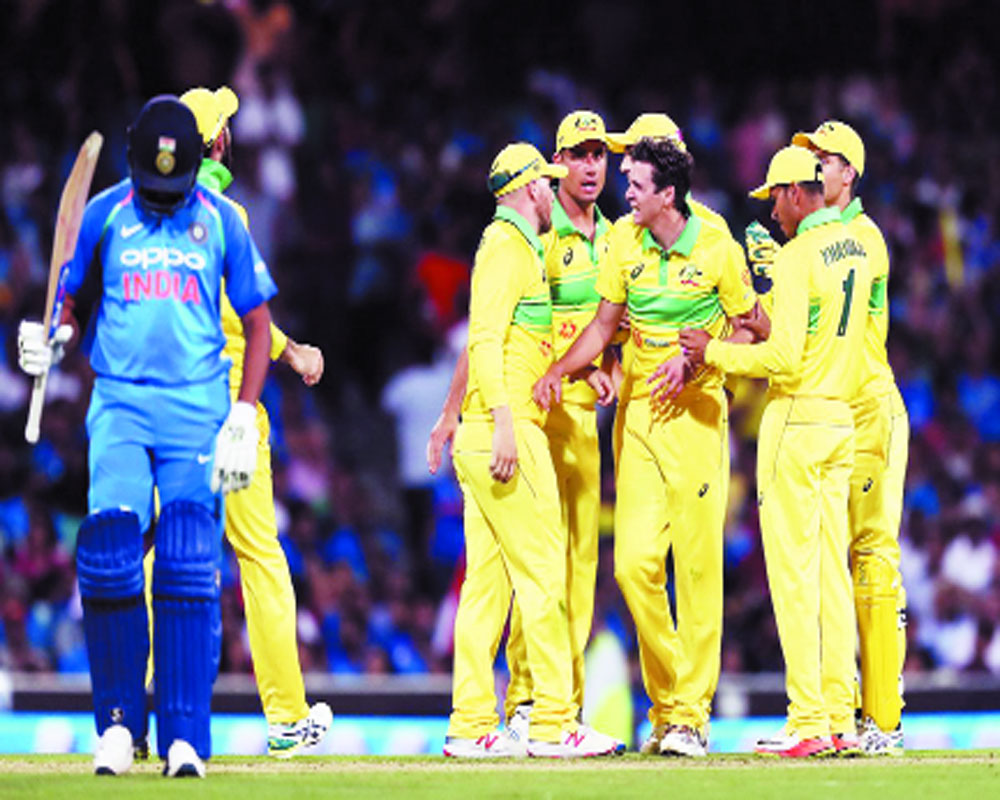 Rohit's heroics go in vain as Richardson, Behrendroff shine with ball to put Aussies 1-0 up in three match series

Rohit Sharma's individual brilliance was not enough to make up for a floundering top and middle order as India suffered a 34-run defeat at the hands of a resilient Australia in the first One-day International, here on Saturday.

Sharma conjured up a magnificent 133 of 129 balls for his 22nd ODI hundred but eventually it only helped in reducing the defeat-margin as India ended up at 254 for nine while chasing a 289-run target.

Three of India's top four batsmen could not reach double-digit and lasted a mere 11 balls.

With 10 fours and six sixes, Sharma reached his hundred off 110 balls, equalling Sourav Ganguly's record of 22 ODI centuries and is now behind only Sachin Tendulkar (49) and Virat Kohli (38).

India were gasping after losing three batsmen at a single-digit score of four before  Sharma and Mahendra Singh Dhoni (51) combined to stitch together a 137-run stand for the fourth wicket.

Debutant Jason Behrendorff broke the partnership by sending back Dhoni, who became only the fifth Indian batsman to complete 10,000 runs in ODI cricket during the course of his knock that came off 96 balls.

The hosts owe their 1-0 lead in the three-match series to a collective batting effort by their middle-order batsmen, specially Peter Handscomb, who switched gears in time to steer his side to 288 for five with his 73-run knock.

Handscomb and Marcus Stoinis (47 not out) grabbed the momentum with their 68-run stand for the fifth wicket as Australia scored 93 runs in the last 10 overs.

Usman Khawaja (59) and Shaun Marsh (54) also scored half-centuries for the hosts who lost skipper Aaron Finch (6) in a slow start after electing to bat.

First, Behrendorff (2-39) trapped Shikhar Dhawan lbw for a first-ball duck before Richardson swung into action. Kohli was caught at short square leg, and then two balls later Rayudu (0) was trapped plumb lbw, as the Indian top-order was destroyed.

It put huge brakes on the scoring even as Sharma and Dhoni struggled to get going. So much so, India managed only a paltry 21-3 in the first ten overs.

Their 50-stand came off 82 balls, while they took India past 100 in the 26th over even as Australia started to feel the pressure.

Thanks to the initial caution, India were only placed at 141-4 in the 32nd over, when Dhoni was trapped lbw by Behrendorff.

Sharma was starting to run out of partners thereafter as Richardson castled Dinesh Karthik in the 40th over.

The run-chase came to an informal end by the 46th over as Ravindra Jadeja (8) and Sharma holed out in the space of ten balls.

Marcus Stoinis (2-66) dismissed Sharma, and India's hopes perished with him for there was too much for the remaining tail-enders to do.

Kumar bowled Finch (6) in the third over, an inswinger slipping in through the gate.

Alex Carey (24) made a good start and was looking set for a longer innings, when Yadav outfoxed him in his very first over, caught at slip off a quicker top-spinner. Australia only managed 41-2 in the first 10 overs.

It brought Khawaja and Marsh together, and they put on 92 runs off 111 balls for the third wicket. In doing so, they pushed India to make changes in the middle overs.

Khaleel Ahmed (0/55) had an off day as he struggled with this front-foot and control over line and length.

Khawaja-Marsh pair added 50 in 61 balls as Australia crossed 100 in the 23rd over. Khawaja brought up his fifth ODI half-century off 70 balls, and opened up a bit more to play some attractive sweeps.

But he perished in that manner as Jadeja trapped him lbw in the 29th over, providing a crucial breakthrough for India. Marsh carried on though, and reached his 13th ODI half-century off 65 balls. He put up 53 runs off 55 balls with Handscomb for the fourth wicket.

Their 50-run stand came off only 49 balls as Australia started to show a little more urgency. Australia finally managed to cross 200 in the 42nd over, but had lost Marsh in the process as he holed out off Yadav in the 38th over.

Stoinis' arrival at the crease had helped press matters as both he and Handscomb opened up with a couple sixes and upped the run-rate.

Handscomb reached his second ODI half-century off 50 balls, helping push Australia past 250 in the 48th over.