A fine balance between fact and fiction

A fine balance between fact and fiction 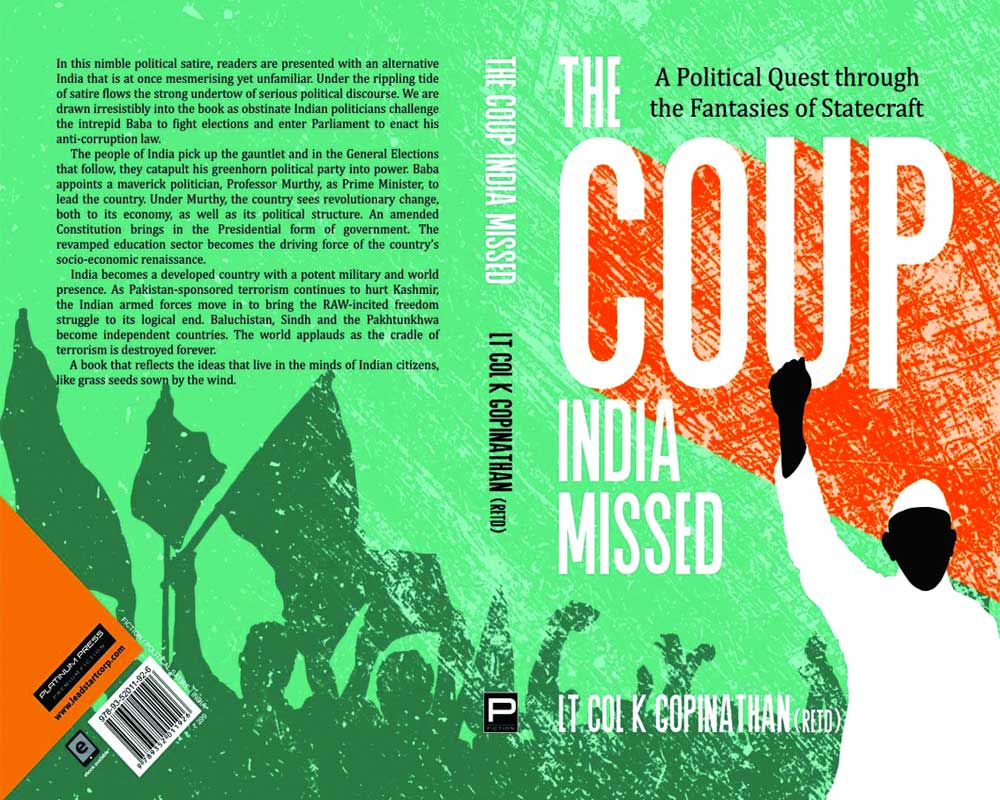 Lt Col K Gopinathan (Retd)’s book is a satire on the state of affairs in the country today and presents the readers with an alternative India that is at once mesmerising yet unfamiliar, writes Col Ajay Raina (Sena Medal)

In this political satire, the author, a veteran army colonel, discusses the country’s myriad problems such as fall of ethics in public life, repugnant caste politics, communal machinations, all pervasive corruption, socioeconomic inequity and terrorism. The topic is universal in nature and touches the everyday-life of the people. It has the latent depth and an immediacy to draw all genders, age groups, and every category of readers.

The book can be divided into two parts — One: The political coup, which discusses the power of democracy to throw out the undesirables and install well-meaning and dedicated political workers in seats of power. And two: Building a prosperous and powerful India through wise use of statecraft.

Baba, a teacher by profession, social worker by choice and politician by circumstances is a saintly person, who understands the underlying psychodynamics of the people and relates effortlessly with them. His anticorruption agitations give a new meaning and direction to the Indian political system. The people take up the challenge thrown at Baba by mainstream political parties to enter the parliament to enact the anticorruption legislation. They elect his newly formed political outfit, the Rashtriya Punarudhaan Sangh (RPS), to power.

Choice of Prof Krishna Moorthy, an intellectual and ruthless hard task master, as the Prime Minister shows that Baba means business. Lok pal is enacted, and the jails start filling up with convicted politicians, businessmen, bureaucrats and others. Tough decisions to tide over the sinking economy ruffle many in trade and industry. The evil nexus of deposed politicians, threatened bureaucrats and murky businessmen, whose heads are on the chopping block for corruption, nepotism and subversion of law, reacts. Trade unions call for nationwide strikes and traders shut shops; expecting to force Murthy to resign or put pressure on Baba to change him. Neither happen.

People suffer in the no-holds-barred political slugfest between adamant Murthy and his incorrigible adversaries. They react through the Bihar assembly elections where RPS tastes its first electoral shock. Murthy decides to get back into the game. In a clandestine operation, four undertrial youths belonging to powerful Gurgaon families, accused of rape and murder, are kidnapped and castrated. This maverick act appeases the large discerning women voters in Tamil Nadu, Assam, Kerala and Puducherry, and RPS wins these assembly elections comfortably. The party is back into the hearts and minds of the people.

Gurgaon castrations and state assembly elections results take the wind out of the agitators’ sails. Murthy decides to go after his opponents, but an unexpected bolt from the blue stalls him. The long-awaited verdict on 2G telecom scam explodes on the political firmament. Those who played ducks and drakes with the exchequer escape the clutches of the law. The ever-active media swings into action and questions the government’s inability to convict the high-profile culprits. The almost dead political agitations enliven and tear through the country’s tranquillity. People become despondent; the country is back to square.

Unrelenting, Murthy looks out for a subterfuge to permanently silence his opponents so that he can concentrate on development of the country. His opportunity comes through a massive bomb blast in a shopping mall at Vijayawada in which hundreds die and another few hundreds are seriously injured. Bhai, an Indian traitor holed up in Karachi, carried out terrorist activities in his motherland at the bidding of the ISI. Baba is very much pained and upset; he demands action. The daring kidnap of Bhai from Karachi by RAW and MARCOS is one of the best narrations in the book and thrills every reader. RPS’s popularity soars.

Exploiting the kidnap euphoria for electoral gains borders political adventurism. With two-third majority in the new parliament, RPS embarks on the ‘Executive President’ form of government, an idea ardently discussed in many public forums, the book further argues its necessity. Further dividing the states for administrative convenience is a pandora’s box, and is best left unopen. Electoral reforms to ensure the country suffered election fever only once in five years is worthy of wider political debate.

Emboldened with the massive mandate in the general elections held under the new Constitution, RPS embarks on its flagship project: education reforms, a point extensively discussed at many places in the book. Political parties have always fumbled to effectively get hold of this essential tool for socioeconomic development of the country. The idea to nationalise the entire school education is fraught with fissiparous tendencies and very strong political will and leadership is demanded. Free and compulsory education from 1st to 12th standard is part of the present government’s National Education Policy on the anvil. The veteran author’s suggestion of two years compulsory military service after school is not pragmatic, it drowns in the sea of sheer numbers. Having said so, the idea fits well into the storyline.

Exploiting the Baloch, Muhajir, and Pashtun unrest to creates refugee crises and attract international attention is a reinvent of the Bangladesh saga. The military operations have been lucidly described. Keeping the United States, Russia and China in good humour, merges well with the plot.

The last chapter, Sannyasa, is a befitting epilogue to the story of the great Indian dream. In a country where political parties are considered family assets and genealogically passed on, the smooth transfer of power in RPS is enthusing and refreshing.

The views expressed are the reviewer’s own