A season of longing

A season of longing 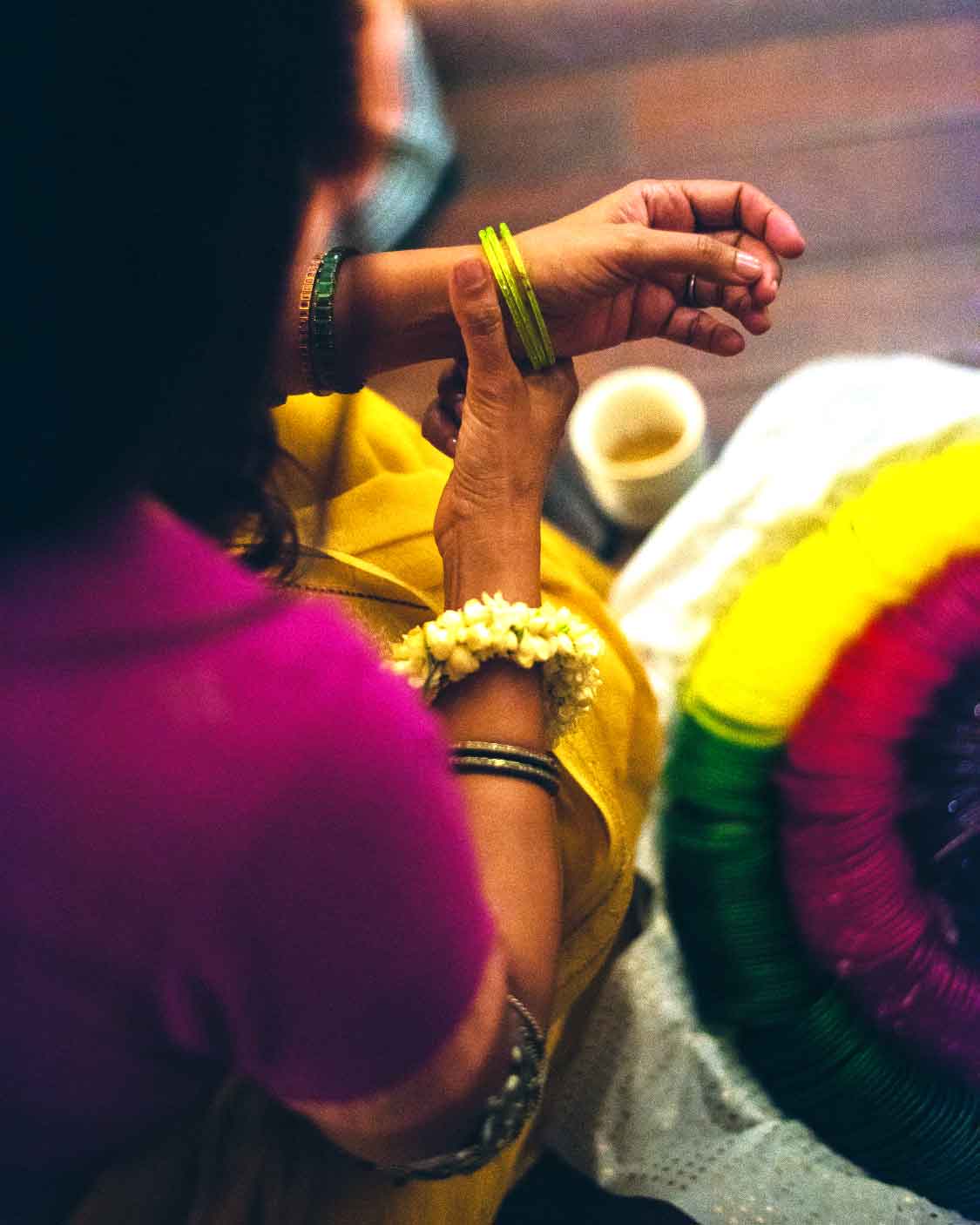 Since ancient times, Varsha Ritu or monsoon has been celebrated as a beginning of a new life cycle in the Indian subcontinent, writes Navneet Mendiratta

Inside a cosy space in the heart of urban Delhi, called Paro at The Chanakya, an intimate gathering of women dressed in the Indian finery, welcome Varsha Ritu or monsoon in traditional style. They are greeted with a freshly stringed gajra made of jasmine flowers and application of colourful powdered bindi on their foreheads, like tilak. The air is fragrant with the notes of Ruh Khas (vetiver) that reminds you of petrichor, that unique fragrance that the earth emits after the first rain drops touch its surface. Strains of kajri in the backdrop set the mood. Their joy is evident as they reach out to the chooriwala and seek their selection of glass bangles, the tinkle of silver jewellery adding to the lure… Sawan is here.

Traditionally, India celebrates six seasons as mentioned in Kalidasa’s Ritusamhara, where each Ritu carries the sense of the correct time for certain actions. Shishira, Vasant and Grishma are part of the Uttarayana, the time of taking in, while Varsha, Sharad and Hemant form the Dakshinayana, which is the time of release or visarga, dominated by the moon.

Samagato ghanagamah kaamijanpriyah priye (Monsoon, dear to those in love) is how the naayak in Kalidasa’s Khand Kaavya introduces this season to his naayika. While Shringar rasa dominates the flavours, it is also referred to as the season of longing and desire. The women, who are happy, bedeck themselves with flowers, dab themselves with perfume and dress their finest in anticipation of a meeting with their lovers. The ones who are lonely gaze at the clouds. Like a lover, the rainy season personifies the women with flowers…

Given that India has a primarily rain-fed agrarian system, the season enjoys a lot of attention. Our ancient literature and now popular culture makes a celebration out of this season, evoking flavours of joy. If Kalidasa’s Ritusamhara and Meghdoot describe this season as one of the first chaste encounter the grey skies and parched land, moisture-laden bringing darkness at noon and the following deluge that lasts days, the Harivamsha in the Mahabharata, invokes the totemic images associated with the rains, such as dancing peacocks, croaking frogs, the fragrance of the Kadamba, and desire, that strikes like lightning. The Virahini of the medieval Baramasa (songs for the 12 months of the years) talks of the pain of separation as this was the time when men traditionally stayed put where they were possibly because roads are flooded or blocked.

This pain of separation is best drawn in the melodious Kunjari Malhar sung in Chamba, a raag dedicated to monsoon. The most notable songs of Kunjari Malhar are addressed to kunja, a bird found in the hills around this time. “Jaa meri Kunjariyo, barsat aave mere Rama, udi ke mila, kaiyon udi ke mila, mere preetam, ho Rama…” the singer tells the bird to carry her message to her beloved, promising gifts if the bird does so.

Another example of rain inspired style is the Kajri, found in the Bhojpuri and Awadhi language. Derived from the word kajal or kohl, Kajri is an ode to the dark kohl-like colour of the clouds. Most songs in Kajri are centred around the imagery of divine love between Radha and Krishna, mango and kadam trees (burflower tree), the jhoola or swing, call of the peacock or papiha and the gathering of girls dressed in their fineries. Kaise khele jaibu saawan mein kajaria; Badariya gheri aayi nanadi (How do I go play with my friends in the rain when I see the dark clouds gathering quickly?)

If the ancients texts speak and illustrate the traditions that we carry forward there are others that list how one must conduct ourselves in terms of food habits and lifestyle. The Ayurveda speaks in detail about the body constituency during this period and suggests ways to make sure that a balance is maintained.

According to Ayurveda, due to the poor strength of Agni (digestive fire), doshas start vitiating one another, primarily the vata dosha and secondarily pitta and kapha dosha which may cause many ailments. Therefore, the food consumed should be soothing to all the three doshas and one that increase digestive capacity. Since this is the time that water borne diseases are most likely to strike, drinking water should be boiled before consuming. The food should have predominant sour and salt tastes and should not be in liquid state. Ginger, black pepper, lemon can be used to aid better digestion and pulses, soups, old grains and mastu (thin water of yogurt) be added to the diet.

The suggested Ayurvedic treatments include Panchakarma treatments  in order to prevent any kind of disorders and boost immunity. Application of Sugandhi or perfume is encouraged as also wearing proper clothes to help protect from from cold breeze, wind and rain. Warm oil application before bath, cover-ups to prevent mosquito bites, burning of camphor infusion make for some other suggestions to aid good health by preventing infections.

The Yogshastra, too, recommends asanas to maintain body-mind health. Many of these asanas are a pre-emptive cure to problems like asthma, arthiritis, rheumatoid that get aggravated during the monsoon. Yoga has a major effect of prevention of cold and cough and is known to increase the overall body immunity protecting it from all kinds of allergies. A niyam comprising of Linga and Pran mudra; Pranayam (Bhastika, Kapalabhati, Anulom-Vilom and Udgeeth) and yog-asanas, namely, Bhujangasana, Matsyasana, Sarvangasana, Shalabasana and Dhanurasana is recommended for full body protection against ailments that are likely to hit during this season.

Even as we put on a guard to check the problems that come with this season, it does not take away from the joy of celebrations that fall in this time period. This is the time when India celebrates festivals like Raksha Bandhan, Janmashtami, Onam and Ganesh Chaturthi. The Ritu brings back the freshness of the environment and makes it clean and green, even the urbanscape comes out looking clean. As someone rightly pointed out: To know the monsoon is to know India, to love the monsoon is to love India.