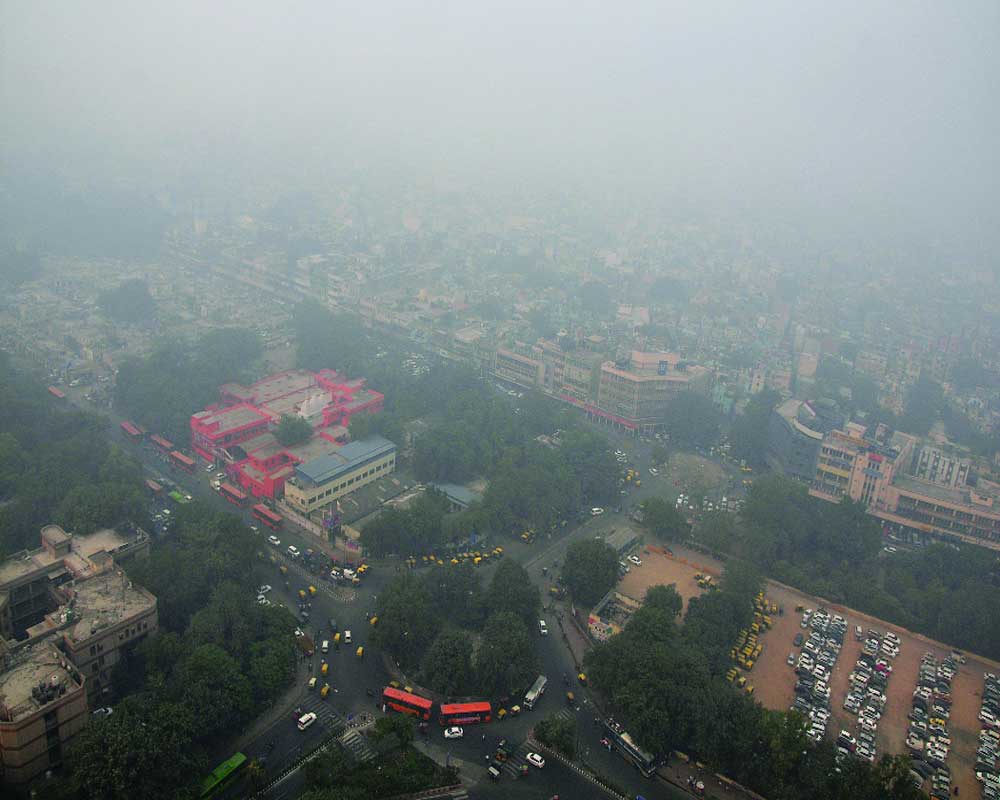 Cleaning of Delhi’s air is a complex and difficult task. It demands structural solutions over a long period. Only, strong public will and collective action can make it possible, writes Dr Manish Kumar Shrivastava

The alarm bells are ringing in Delhi, once again. The air quality has plummeted to dangerous levels. A combination of irresponsible festive celebrations, unavoidable change in climatic conditions, and compulsive burning of agricultural waste in the state of Punjab and Haryana contributes to making the dark side of the invisible air visible. The resulting invisibility is causing delays, or even cancellations, of flight movements. The slow process of deteriorating health, too, gives a coughing appearance.

Only a fortnight ago, the people of Delhi had flouted the advisory against firecrackers. Now, they are open to accepting some troubles such as shutting down of schools and offices, restrictions on the number of vehicles on the road, hoping that it would help remedy the emergency staring in the face, pinching in the lungs. The Environment Pollution Control Authority (EPCA) has filed a plea in the Supreme Court against the stubble burning in neighboring states. On November 4, 2019, the Supreme Court ordered to stop construction and demolition work, burning of garbage and entry of diesel vehicles in Delhi. It questioned the effectiveness of the Delhi government’s odd-even scheme and pulled up the government for the report on long-term action. All of this is a surreal repeat of last year and years before that.

While the air quality in Delhi has been alarming for many years now, and throughout the year, alarm bells ring only around the beginning of the winter season. For most of it, the debate around addressing air quality in Delhi gets caught in a trivial analysis of attribution. The main causes of high levels of air pollution, particularly PM2.5 and PM10 are well known. Ongoing construction activities, increasing number as well as age of vehicles in and around Delhi, burning of biomass during winters for heating, waste, and industrial activities are constant contributors to high levels of concentration of suspended particulate matters (SPMs) in the air throughout the year. Burning of crop residues in neighboring states coupled with firecrackers during Diwali and drop in temperature causes a sudden spike in pollution levels.

While surveys find the public perception emphasising on the growing number of vehicles as the primary cause of the problem, scientific studies based on observations and source apportionment approaches adjudicate stubble burning in Punjab and Haryana as well as old diesel vehicle plying on the outskirts of Delhi as main culprits. This results in trivialising the issue by focusing on the debate as to what is the most important solution and who should be held responsible to clean the air in Delhi. It exclusively focuses on a point event of a sudden spike in pollution levels whereas the real issue is the sustained high levels of SPM concentrations throughout the year. Arguably, as also emphasised by the Supreme Court, a plan of action for long term solution is needed.

It’s a structural and ethical challenge

Delhi’s air pollution is a classic case of environmental justice. The benefits and harms of environmental degradation are skewed and disproportionately distributed across different populations. The only twist, perhaps, is that those causing the pollution are not insulated from its negative impacts. It has fundamental inter- and intra-generational dimensions. The children and elderly are among the most vulnerable to the health impacts of continued poor air quality. The poor and homeless are the victims of air pollution without contributing much to it. Their only liability, if at all, is in burning biomass for meeting the demands of mere sustenance of their existence — cooking and warmth during winter. The unfortunate irony is that many poor people, as daily wage workers, rely on polluting activities for their livelihood that is a long-term threat to their life, for example, construction jobs and waste handling. Putting a stop on the construction and demolition work in Delhi, while may not bring any significant improvement in the ambient air quality, would put such sections of urban poor under double duress — loss of jobs on the one hand and continued exposure to air pollution on the other.

In a slightly different way, the same is true for farmers accused of poisoning the lungs of Delhi. If they don’t get rid of stubbles, they risk the loss of income in an already struggling economy of the agriculture sector. Timely sowing of seeds for the farmers of Punjab and Haryana (rather, anywhere in the world) is as important as it is to travel to work for the urban middle class in Delhi. The challenge of cleaning Delhi’s air, therefore, is a structural one, and like any other planned structural transition, it has difficult ethical and economic dilemmas to deal with. To understand better the dynamics of increasing pollution, let’s consider the long-term effectiveness of shutting down the Badarpur thermal power plan in 2018, a hard, structural, yet stand-alone, intervention which certainly lowered pollution in Delhi as reported by the Chief Minister of Delhi. Yet, there are reasons to ask how long the positive impact of this intervention will last. How long will it take for the increasing vehicle population in Delhi and construction activities to offset the gains?

Beyond doubt, improving air quality in Delhi would imply making hard choices. In these choices, many difficult trade-offs, as well as practical and moral considerations, would need to be confronted. A few of them are as follows:

Can you halt pollution when the economy needs to run? India is at the crossroads of development versus environment debate. When economists are warning of the threats of impending economic slowdown, wouldn’t curbing deployment of vehicles (and restricting the movement of goods) and banning construction sector further push the effective demand downwards, adding to the economic woes? Even if these implications are short term, there is no denying that the curbing pollution in Delhi would come at a serious economic cost. Who should pay for that cost, or who would bear the brunt of it?

Is blaming farmers in neighboring states justified? The empirical fact that the burning of agricultural residues in the two neighbouring states contributes to the disastrous air quality of Delhi is beyond doubt. However, is it justified to focus on such ‘external factors’ as the primary target for solution considering they contribute only to the seasonal spike, whereas general concentration levels of SPM remain harmful throughout the year? Put differently, the common rhetoric of emissions from within Delhi versus emissions from outside Delhi is effectively a vacuous narrative if one is serious about the impacts of poor air quality. Such a narrative portrays the people of Delhi as innocent victims, which most of them are not. The real narrative is that of the inter-and intra-generational injustices imposed by sustained high levels of SPM concentration throughout the year.

How moral is it to expect Punjab and Haryana to incur the cost for the benefit of Delhi? Notwithstanding the ongoing efforts by the government of Punjab to limit stubble burning by monitoring and promoting technological solutions such as ‘happy seeders’, the expectation from the farmers and the government of Punjab and Haryana to incur the cost of avoiding stubble burning is unreasonable. More so, when the beneficiary (Delhi) does not offer any compensation for the potential losses. Yes, on the moral grounds, the people of Delhi can expect responsible behavior from the farmers of Punjab and Haryana. However, a corollary to such an entitlement is the expectation of reciprocity and extension of the same concerns to the urban poor, children and elderly population in Delhi. Delhi should be willing to take drastic measures to reduce its average SPM emissions for the benefit of everybody.

There is no silver bullet to tackle air pollution in Delhi. A comprehensive targeting of all sources throughout the year is necessary. In addition to large scale changes such as the provision of cost-effective and efficient mass public transport systems, a combination of regulatory and participatory action may create the necessary momentum for structural change. Given the difficult trade-offs involved in bringing about the changes, a ‘provision, control, and prevent’ approach targetted at different drivers of air pollution may be more pragmatic. Below are some illustrations.

Provide for prevention: Although it is seasonal, biomass burning for heating, along with perennial cooking can be addressed by providing for cleaner cooking options and heating provisions. This would be extremely difficult, but also beneficial to the poor homeless households in the NCR region. An innovative modified version of the Ujjwala scheme or public provisioning of affordable food and shelter may be considered. In the transport sector, the argument for the provision of cost-effective public transport systems to improve environmental health is not new. Many countries that have successfully dealt with air pollution with a combination of creating public transport systems and providing support to efficient private vehicles, particularly electric vehicles.

Control through participation: An array of control-oriented participatory interventions involving residents within localities can create the habit of owning ambient air quality. Such interventions are better suited to address the sources related to waste management, burning, and dust control. The EPCA has already finalised Graded Response Action Plans for daily emergency action in areas where PM2.5 concentrations are higher than Delhi’s average concentration. These need to be implemented and extended to as many colonies as possible.

Control by regulation: An effective way of controlling air pollution is by controlling the dispersion of SPMs. This can be better done in the case of dust particles from construction and demolition activities. Stringent norms about conducting construction and demolition activities and strict enforcement of these norms can go a long way. These norms should also be complemented by the health standards related norms to protect construction workers.

Prevent by regulation: Regulatory measures are required to deter people from making choices contributing to air pollution or forcing them to make desired choices. Such regulations can rate very high on intra-generational justice criteria as they affect only those who have the capabilities to make choices and by design exclude the poor from the burden of environmental protection. In most successful examples, such as in the UK and EU, such regulations have targeted promoting efficiency in-vehicle use and transport services.

Participation by regulation: There is no regulation in India to address inter-state transboundary pollution of any kind. For example, the pollution of the river in one state affects the people in the states downstream. But there are no provisions or guidelines for the two states to cooperate in dealing with such pollution. The same is true in the case of transboundary pollution in Delhi caused by the burning of agricultural residues in Punjab and Haryana. It may be a useful idea to explore a regulatory mechanism that can force and facilitate cooperation between two or more states in address problems of environmental degradation in a fair manner.

To sum up, cleaning of Delhi’s air is a complex and difficult task. It would demand structural solutions sustained over a long period. The claim on the right to clean air alone is unlikely to deliver low levels of pollution. Only the respect for the values of intra-and inter-generational environmental justice along with the willingness to take active responsibility in collective action can guide Delhi to ensure a healthy, pollution-free, breathing space for itself.