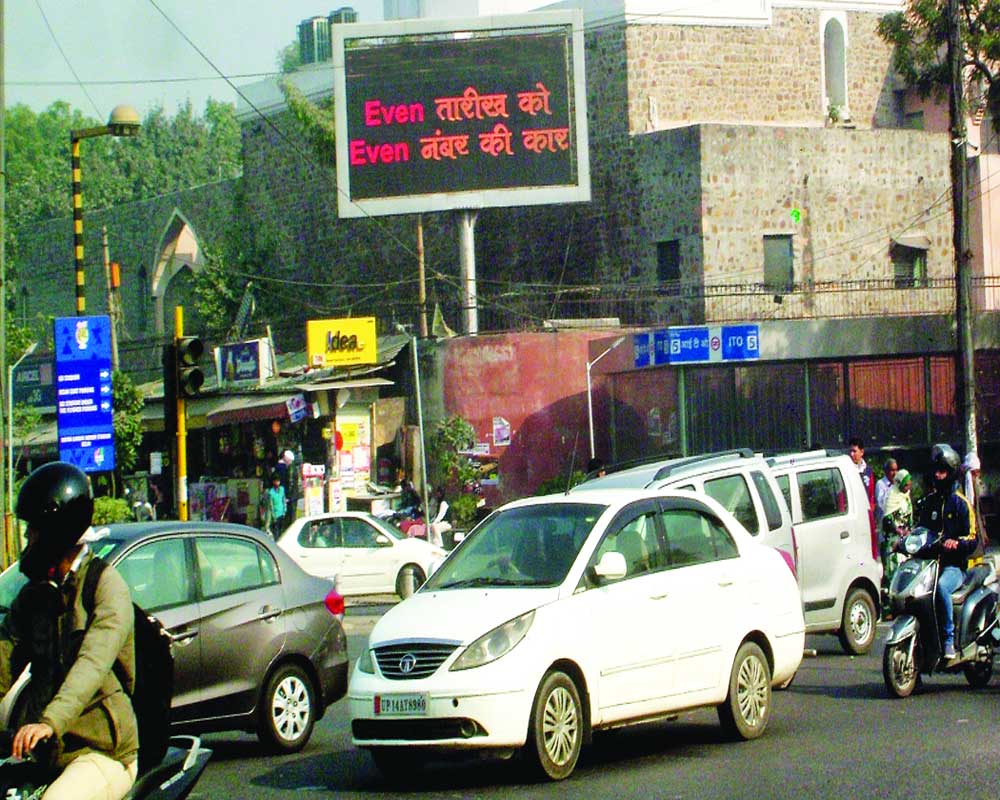 The odd-even rule is back in the Capital for the fourth year from November 4. SHALINI SAKSENA and MUSBA HASHMI speak with experts and environmentalists who say that while the concept is good, it will not have a major impact on the overall air quality index in the absence of a concerted plan

The horror returns to   Delhi every November riding on a pollution wagon. The skies turn dark, the air becomes heavier and dark clouds appear to take over the city. If you are still wondering what is this scenario all about, you must have never ever lived in the city. For Delhiites this is nothing but a part and parcel of  life,  living with over 1.92 crore vehicles.

Fourth year in running, the odd-even scheme is  back in the Capital. This year, Chief Minister Arvind Kejriwal announced the rule much in advance, on September 13, 2019, keeping in view the fact that Air Quality Index in Delhi worsens during this time.

The rule will be implemented from November 4 to November 15, 2019 with odd numbered cars allowed on odd dates and vice-versa. Violators will have to pay a fine of `4,000.

Mohammad Imran, Founder, Safe Road Foundation, tells you that the odd-even rule is a punishment for Delhiites. “The reason why I am calling it a punishment is that for the whole year we do what we want and in November when the pollution levels are hazardous, the Government has to do something and that is when odd-even rule comes into action. During this time, commuters often go through some serious troubles and that is why it is like a punishment for them but for all good reasons. The Government, also, is not ready for such initiatives. There are no proper transport facilities. A lot needs to be done for this rule to become a success,” he says.

A ray of hope here is that this year, unlike the previous one, even privately owned CNG vehicles will have to follow the rule. Only two wheelers, women drivers, vehicles carrying school children in uniform and vehicles used for medical emergency will be exempted.

Under these circumstances, the obvious query is: Why do we have to wait for the thick black smog to cover the Capital to take some strict measure? Why not do it all around the year? Imran has a take on this. “If the Government will implement the rule before Diwali, people will not accept it as it will impact their festive shopping. Moreover, some will even try to give it a communal angle,” he says.

The reason why Delhiites is not much bothered about this situation is that people here have become used to pollution. For us, a sunny day with deep blue clear skies is once in a blue moon thing. We are habituated of living under the smog and not skies.

“There is much more that the Government can do to tackle pollution. One of the many things than can be done is the introduction of ropeways to Delhi. This can solve many problems. Though it will require a lot of infrastructure and efforts but the end product will be worth it,” he says.

Ashish Jain, Founder-Director, Indian Pollution Control Association says that  road transport is not the major factor of air pollution. However, it contributes to some extent.

“Whenever the city gasps for fresh air, we come up with odd-even rule but it won’t be of much help until and unless we will start taking care of the other factors that cause pollution. Road transport only contributes a bit. The major reasons are stubble burning, garbage burning, fumes from the industries and construction. Therefore, coming with such schemes will not bring about any good. Instead the Government should focus on providing alternatives to the farmers of the nearby States who don’t have any option but to burn. The Delhi Government should work in co-ordination with the nearby State Governments to help curb pollution. Awareness should be created for safe waste disposal and people should be urged not to burn garbage. The authorities should keep a strict check on it,” he says.

The reason why Delhi becomes more polluted is because of the city’s geography. “Even the weather conditions in Iran, Afghanistan and Pakistan will affect Delhi,” he tells you. Curbing pollution and coming up with feasible solutions need time. It cannot be done overnight or for that matter in 10-12 days.

“The Government doesn’t think about the pollution for the rest of the year and wakes up only in November. To curb pollution we have to think of solutions time and again. The Government should hold timely meetings to come up with long-term solutions. This can’t be done with a snap of a finger,” he tells you.

In future, electric cars can help solve these problems but we still have a long way to go. “Electric cars can prove beneficial, but to make it successful we need to have proper infrastructure. For the time being, as I mentioned before, the Government should focus on other factors of pollution and not just road pollution,” he opines.

For those who don’t understand what smog is — it is derived from merging of two words — smoke and fog. It consists of a mixture of air pollutants like fine particles, toxic gases, water vapour, and ground level ozone. The main sources of these are pollutants released directly into the air by diesel-run vehicles, industrial gases and heating/burning due to human activities. It is made up of a combination of air pollutants that can compromise human health, harm the environment and even cause property damage.

According to BS Vohra and environment activist, the concept of odd-even is good. “If you allow all two-wheelers to ply on the roads, what will you do when those who own cars commute via bikes? They will negate the impact. The need of the hour is to bring two-wheelers under the gambit. But the minute one does that, we lack proper public infrastructure. The whole concept is just a formality then. For the scheme to have an impact, there is a need for it to be implemented properly. But this is not possible since our public transport system is not up to the mark,” Vohra says.

He tells you that while the PM 2.5 and PM 10 was less this year, as compared to 2018 it is important to analyse the impact of the rule. “Let all the monitoring agencies like SAFAR and DPCC come on one platform and then give a report. Just one agency giving its opinion and results is of no use. There are reports of 2002, 2007, 2014 and 2016. Each agency has given different vehicular emission results. What we need is a combined result report and then take action. There are so many reasons for the present smog in the Delhi-NCR. There is stubble burning, on one hand, on the other, there was smoke from Diwali cracker,” Vohra tells you.

He makes a valid point and asks how is it possible for all the smoke from stubble burning head to Delhi? “There are other adjacent States and even a neighbouring country. The smoke will head towards in which direction the wind is blowing. Not that stubble burning doesn’t leave an impact, but it is not the sole reason. The Governments are using stubble burning as an excuse. Most of the pollution comes from vehicles. Today, there are over a crore cars and more than 70 lakh two-wheelers on the road. The pollution from vehicular emissions combined with stubble burning and firecrackers adds to the present situation,” Vohra explains.

He stresses on the need to link cars and two-wheelers with Adhaar and Pan card and to have one family, one car rule. “The rest of the family members need to use public transport. With so many cars, the situation worsens during festivals when everyone is out on the roads. Strict norms are a must. Five years back, we used to think what it would be 10 years down the line. Today, we have to see what will happen in the next five years. On normal days, metro runs packed. With restrictions now, will it be able to handle passenger traffic from tomorrow? Alternatively, people who have and cars and two-wheelers will use the latter to commute. The impact will be negligible as it was last year,” Vohra says.