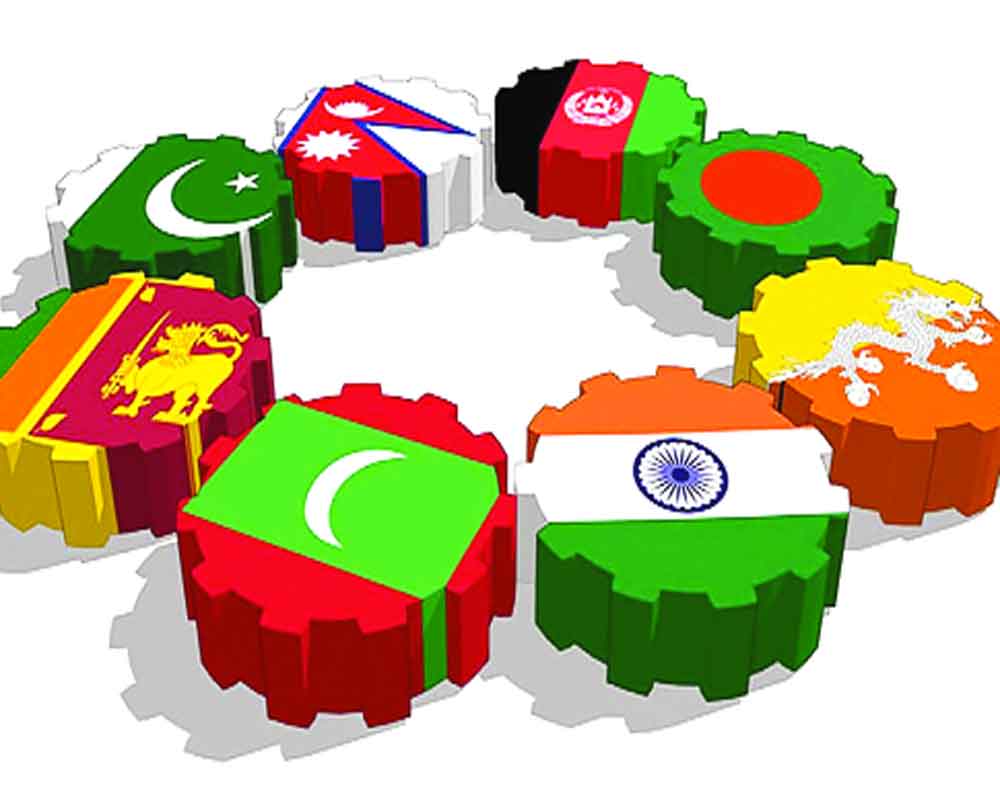 This book argues that space making is an inherently political act and attempts to explain how Indian foreign and security policy elites understand neighbourhood in spatial terms. An excerpt:

Territoriality is often regarded as a blind spot in social inquiry. However, there is a major body of literature that interrogates the notion from various vantage points, along with a host of related ideas like nationalism, citizenship, and ethnicity. The relationship between territoriality and space too, though exceedingly complex, has attracted a fair degree of attention in recent years. This chapter is organised into two parts. In the first section, we look into various tracts on territoriality. We begin with the concerns of political theory, go through the sociological works by Henri Lefebvre, engage briefly with few interventions by critical geographers, and then culminate by looking closely at certain perspectives of international relations (IR hereafter) scholars. In the second part, our focus shifts to India’s spatial imaginations of South Asia. This part lays out the primary arguments of the text and fixes the conceptual categories that are to be deployed in the chapters to follow.

The Argument and Scope

This book is about India’s spatial imagination of South Asia as a neighbourhood. By India’s imagination, I mean to denote the elite visions that are reflected in foreign policy discourses of the Indian state. The idea of a neighbourhood is always a spatial imagery, anchored in some metaphor or the other. The imaginations have two sources. First, they are rooted in India’s self-identity as a nation-state. All imaginations are discursive in nature and are intersubjectively constituted. However, the Indian state has objective preferences that it seeks to realise in the neighbourhood. The character of the State, or what may be called ‘State identity’, conditions these preferences. But a State, no matter how dominant within a given region, cannot imagine the region through its own identity alone.

Strategic, economic, and cultural considerations provide the second source of its imagination of the neighbourhood. This indicates a subtext, or a larger narrative, that underpins their idea of a region. Space and place are related but not identical. According to Yi-Fu Tuan, a space can be accessed intimately through our senses or discursively through our ideas and imagination, mediated, invariably, by symbols and representations. He found space empty in the sense of lacking human values but having the properties of demarcation. Demarcation leads to holding of a space as defensible against intrusions. Space, therefore, seemed abstract rather than social.

Place, by contrast, was a location marked by intimate contact resulting from human experiences. In a way, spaces became places when humans filled it with meaning and purpose. A place is therefore existential and cannot be tied to observable geographies or time. In a comparable vein, the human geographer Edward Relph contrasted space with a more experientially-based understanding of place, and arranged these on a continuum that had direct experience at one end, and abstract ideas at the other. In this book, I use the concept of space by being mindful of its distinction from place. I do not claim that all spaces are places. Since I do not write here of an anthropological account of place-making, the central concept that I use is space understood as political territoriality. The spatial vision of a state is a discursive subtext that provides meaning and substance to a state’s foreign policy vis-à-vis its neighbours.

India’s understanding of South Asia thus involves a two-level exploration. The first deals with the contestations of India’s self-identity as a nation-state, and the identity selected by the dominant official elite to condition the State’s foreign policy preferences in the neighbourhood. The second relates to the deployment of spatial metaphors that explain India’s policy choices as preferences born out of domestic identity considerations,and which cannot automatically be projected on to others. The conjugation of selfhood and the deployment of spatial metaphors answer some of the intriguing questions that plague foreign policy analysis. It explains why a State holds particular interests as vital by arguing that this is a deliberate process of selection by the dominant elite, which renders alternative definitions of benefits invalid, draws attention to the justificatory discourses that are invariably deployed to achieve legitimacy, and shows why alternative spatial imaginations are emasculated in the process.

This book is an attempt to explain how Indian foreign and security policy elites understand its neighbourhood in spatial terms. My central argument is that this understanding is an unmistakably realist one, one that prioritises a geopolitical conception of space over those of commerce and community. However, this is not an endorsement of political realism. I am also not arguing that the geopolitical reading is the ideal way to look at South Asia in spatial terms. Instead, I posit that since independence, its espousal of a non-aligned foreign policy notwithstanding, the Indian State has leveraged its geopolitical or power imagination. No matter which political party came to power, this spatial imagination has remained unchanged. I intend to showcase the major strands or dimensions of this imagination and argue that neither economic prosperity nor community have succeeded in guiding India’s neighbourhood policies.

This does not mean that the alternative conceptions are meaningless. The attractions of commerce have certainly affected India’s foreign policy choices, and the need for rapid economic development as a precondition to emerge as a major power has been a constant refrain in New Delhi’s foreign policy discourses. However, geo-economics has remained subservient to geopolitical concerns, and considerations of strategic interests have, when required, prevailed over the demands of international business, trade, and commerce. Th e weak domestic basis of commercial liberalism has further accentuated this tendency. The Indian business class has gone global; however, they have not attempted to redirect the goals of Indian foreign policy in South Asia. Likewise, the idea of community is not determinant to India’s spatial imagination.

Cultural borders are certainly as pertinent to South Asia as anywhere else. Such borders are also more permeable. However, the State has shown little interest in experimenting with cultural borders. The communities living near or at the border certainly have a more anthropological reading of territory and space. However, the State has not subscribed to such a vision. In fact, the State has become more paranoid about surveillance and protection of its borders, which is visible in erection of physical impediments of various kinds in spite of investment in the idea of infrastructural connectivity across international borders.

Here, as elsewhere, the State space is distinctly geopolitical and there is no evidence of any alternative cartography of trust, or a humane geography of a region sans hard borders. This account, however, is not a normative statement. I argue that space-making is an intensely political act. Unless political forces, wedded to a radically different or critical ontology of borders and territorial spacing, come to power, there is no possibility of the geopolitical understanding retreating. Hence, my arguments are different from those made by both realists and critical geographers. Unlike realists, I take the alternative spatial imaginations as legitimate. I agree with critical geographers in that post-colonial borders are not natural. However, I differ in recognising that while borders are artificial (non-natural), they are, nonetheless, and potent and real.

Borders, boundaries, and territoriality are distinctive concepts. Before moving on to territoriality, which is the primary concept of this study, a few preliminary observations on borders and boundaries are in order. First, borders make identifications of various kinds and give meaning to the shape of a society. Hence, as David Newman (2010) argued, territory and borders travel together. Second, borders can be of various kinds and these cartographies do not coincide. Particularly, political borders are not cultural borders. Political borders are the result of space making strategies of modern nation-states that do not coincide with cultural spaces. In fact, whether one can invoke the concept of borders to culture at all is contestable.