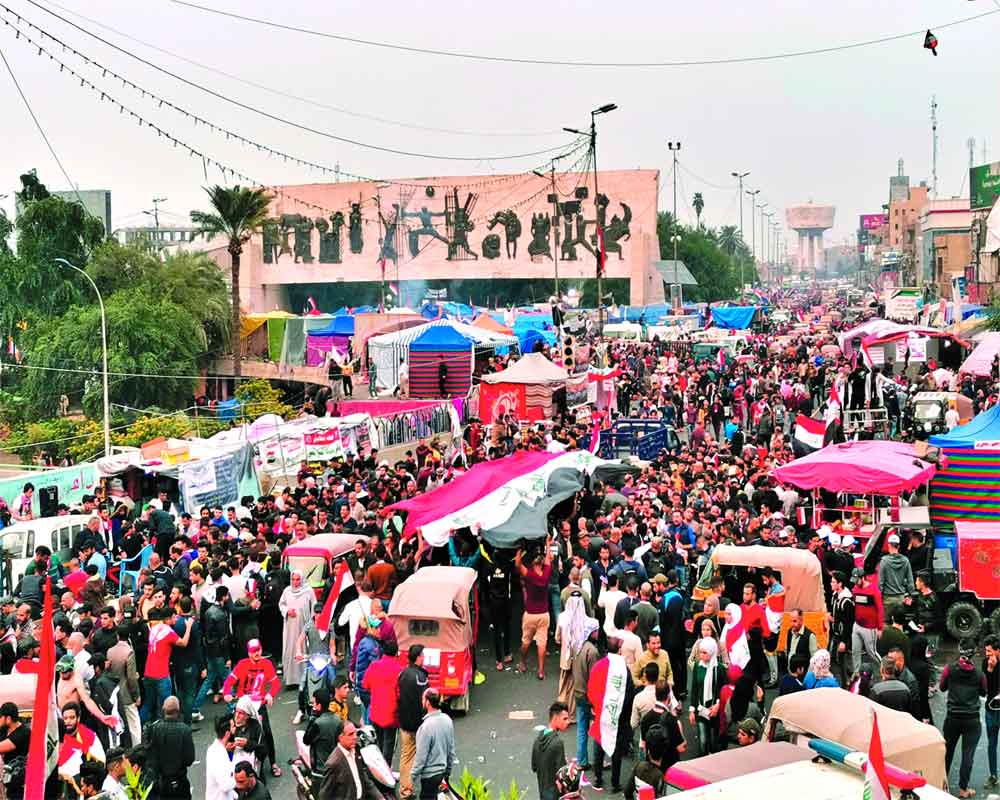 Post-Saddam Iraq has graduated from the demands and desires of the generations which felt satisfied with whatever the Government gave them. The younger generation knows that the exchequer is earning enough revenue from oil but the Government is unwilling to spend the same for their welfare. Till the Government delivers on its promises, there is no end to protests in Iraq

The world witnessed a spate of violent protests in Iraq, Lebanon, Hong Kong and Chile in the last few months. However, the Iraqi protests stand out in terms of intensity of violence: over 300 young protesters have been killed and thousand others injured in the crackdown by the Government security forces. After the fall of dictator Saddam Hussein in 2003, it has been the largest popular demonstration across Iraq, mainly in Shia south.

Protesters have blamed the successive Governments for large-scale unemployment, rampant corruption, and poor civic services, despite the exchequer getting easy revenue from the lucrative oil businesses. However, the authorities claim that Iraq does not get reasonable chunk of its share from the complex and unfair system of international oil markets to revive its fractured economy. Majority of the people lack access to adequate healthcare, schooling, water or power supplies as the promises made by successive Governments have remained unfulfilled. According to a World Bank report, nearly three-fifths of its 40 million people live on less than $6 a day. The Iraqi protesters, primarily comprising the economic poor class, are venting their anger against some filthy rich political leaders and businessmen who are pillaging the country’s wealth, pushing the commoners into further poverty.

The trigger for the latest round of protests was the news of demotion of Lieutenant General Abdul Wahhab al-Saadi, the Commander of the Iraqi Counter Terrorism Force (ICTF). He gained wide popularity during the anti-ISIS military campaign and became a national hero. Protests in Baghdad jog the memory of Arab Spring in 2011, where the protesters had swarmed the streets in the Arab world. The year-long Prime Minister, Adel Abdul Mahdi, has witnessed the most tumultuous phase of his tenure as protesters are demanding his immediate removal from office and fresh elections.

The initial response of the Baghdad authorities, using unnecessary lethal force, was shockingly unscrupulous that made matters worse. Iraq’s most revered Shia cleric Grand Ayatollah Sayyid Ali Hussaini al-Sistani, who holds unprecedented moral authority among the Shia believers, had called upon the ruling clique to initiate major political reforms. He issued the statement through his representative in a Friday prayer gathering. He urged, “The marjaiyya (Shia religious authority) has made clear its position calling for reform in the last Friday sermon. It stressed that the demonstrations must be peaceful and free from violence and vandalism. It also underlined the sanctity of Iraqi blood, and the need for political forces to respond to the rightful demands of protesters.” While influential Shia leader Sayyid Moqtada al-Sadr too called for reforms and urged protesters to continue to press for their demands.

One of the significant features of the anti-governmental protests in Iraq is that it has an element of cross-sectarian or ethnic identity i.e. Iraqi nationalism. Unlike previous protests, symbols of Shia piety have not taken a central place in the demonstrations which signifies the gravity of the demands which entirely stick to its legitimate socio-economic demands. It reflects the growing disenchantment of Iraqi people towards the religious parties who have been ruling for 16 years. It is an alarming curve for the ruling elites and they need to pay heed to the people’s voice. It also signifies a new turn of events in country’s beleaguered history which only experienced repression by ruthless dictators and started craving for the idea of social justice and citizenship. However, despite having a broad nature of the protests largely participated by young and poor social class from Shia background, the Sunni and Kurdish areas haven’t extended solidarity with the protesters. Sunni and Kurdish leaderships are suspicious that any break in the status quo will dismantle their positions in the power structure what they are enjoying in the unofficial mohassasa system (confessional system) introduced by the Americans after 2003.

There is no denying the fact that after the US occupation, the CPA-led administration had created such mayhem in the country. The menace of terrorism and sectarianism gained enormous foothold among multi-confessional society. There is an ample evidence of external intervention by regional actors in fomenting political unrest in Iraq. The attacks on Iranian consulates and embassy substantiate this argument. Since 2003, arch rival Iran has turned Iraq’s staunchest ally.

Iran’s ties with Shia political groups which have been at the helm of power irked the regional actors led by Saudi Arabia, and they perceived it as the revival of Shia politics in West Asian and North African (WANA) region. Iran’s role in repulsing the rise of Islamic State of Iraq and Syria (ISIS) further brought these two neighbours closer. Most of the Iran-backed factions like Asaib Ahl al-Haq, Saraya Khorasani, Badr Corps, Harkat Hezbollah al-Nojaba constitute the backbone of Hashd al-Shabi (Popular Mobilisation Forces, PMF), an umbrella group of militias which came into existence after the ISIS’ blitzkrieg attacks, further alarmed the US, Israel and other regional powers. Displaying extraordinary courage in countering the ISIS tide, PMF achieved pre-eminence in the society. By virtue of its popularity, the political bloc of PMF, called al-Itilaf al-Fatah (Conquest Alliance) led by Hadi Amiri, secured a sizeable chunk of seats in the parliamentary elections last year. However, al-Hashd has kept restraint despite anti-social elements camouflaging into the crowd to sabotage the peaceful protests. However it had vowed to crush any coup attempt with malicious intent.

There is a little Indian connection with the ongoing protests in Iraq i.e Tuk-Tuk. The three-wheeled Tuk-Tuk, a word referred in common parlance to autorickshaw has its origin in India. It was being manufactured by a prominent automobile company Baja Auto and exported to Iraq. It functions as frontline ambulances, ferry protesters and supplies necessary stuff. The most interesting part is that some activists started a tabloid named after it in order to circumvent information blackout by authorities. Iraq’s once marginalised Tuk-Tuk drivers took a centre stage in Iraq and the vehicle become a symbol of resistance called ‘Markabat al-Thawra’ (vehicle of revolution).

Despite the resignation of the Prime Minister, people are still angry and protests will go on until new political and economic reforms are introduced. But what comes after these demonstrations will not be the same as before. Iraq is going through a phenomenal phase. The new opposition that is emerging can play an important role to lead status quo towards change. The authorities should initiate a process for structural changes and must pay heed to their legitimate demands.