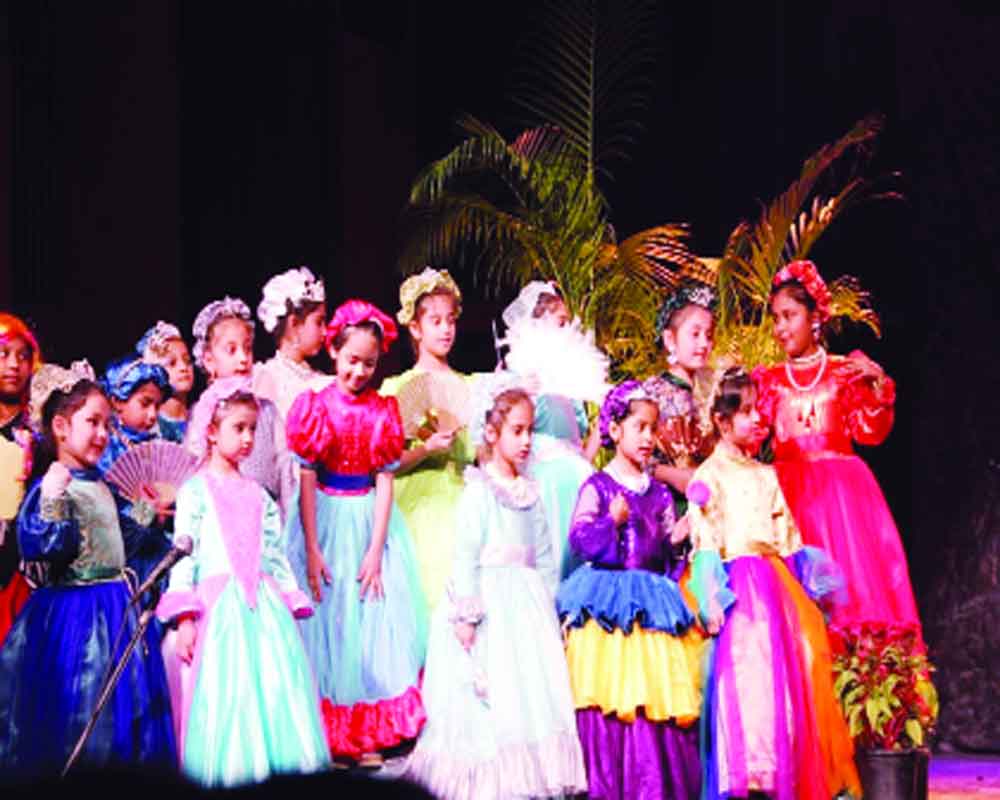 What would your reaction be if someone were to tell you that the Capital witnessed a stage shaw that had an all kids star cast. Incredulous, would be the first thought to come to mind. But believe it or not the retelling of the classical — Sleeping Beauty — enthralled the audience recently because its stars ranged between the ages of four to 13 with the 13-year-old playing the lead in Sleeping Beauty.

The musical is a brainchild of  Bubbles Sabharwal (Swara Bhaskar’s mother in Veere Di Wedding) and Lushin Dubey. With over 30 years experience, the duo, who started Kids World back in 1990, are also the creators of Wizwits that performed at Kingdom of Dreams.

Sleeping Beauty that began as a theatrical workshop soon took the shape of a full-fledged stage as the kids wanted to see themselves grow.

“Entertainment should be wholesome and healthy not only movies. There should be other avenues. Children’s personality grows with leaps and bounds having gone through theatre. We teach confidence and communication where there has to be clarity of thought and speech. This empowers you,” Sabharwal says.

A majority of the inspiration and elements for the musical came from the fairytale. The rest was from everyday life. “There are some fictional element to the play as well. There are a couple of characters who are not there in the original like Ficklehead. They are like two jokers. This is to introduce humour into the play. Maleficent is an eight-headed monster whose power is in a purple flower. The reason for this dramatisation is to let the kids’ imagination a flight of fancy,” Sabharwal tells you. Though 80 per cent of the Sleeping Beauty is in English, there rest is in Hindi.

She doesn’t agree that theatre has come of age today. “There has always been viewership for theatre. Back in 1992, Peter Pan was staged. We did 30 shows. But Kingdom of Dreams gave a pan India podium to theatre. This has helped. School groups were coming in to watch Wizwits,” Sabharwal tells you.

According to her what brings down theatre is the prohibitive cost that comes if one wants to showcase it in Delhi, not so in the case of Mumbai where there are places where one can get basic infrastructure.

Fourteen-year-old Tahira Solomon from Sanskriti School who played Aurora says: “I have been working with Kids World since I was about 6. With each play I’ve not only created many new friends but I’ve also learned many new things and have grown into a much more confident person under the guidance of Lushin and Bubbles ma’am and I  hope to continue my journey with them.”

Her sister Amyra who is in Class IV tells you that she used to watch her sister do plays in Kids World since she was a toddler and was fascinated and that got her interested in workshops. “Now , I got to be on stage and perform in front of many people. I have lots of fun and I make a lot of new friends,” the eight -year-old student of Sanskriti Schools shares. She played the witch, Gorgon.

Anya Rastogi, a nine-year-old Class V student of Modern School, Vasant Vihar who played Malificent says: “I have had lots of fun performing as Malificent in Sleeping Beauty. At Kids World, they don’t push you but make it interesting and make you take part in the decisions about the play also. I have also made a lot of new friends. I love the music and the costumes as well,”

Laura Santana who gave the music tells you that she has ben part of the Kids World since she was a kid herself. Her inspiration for the musical comes from the fact that her father and uncle gave music to each and every stage play that Kidsworld has given — From Annie to Oye Matilda! Tu Hai Ustaad!

“My inspiration has always been the kids. I started working with my uncle the minute I passed out of college. Whenever we do a production, we make singing a little contemporary so that the kids can enjoy and have fun while learning,” Santana explains.

The challenge is that kids today are not exposed to jazz, western classical and or even Indian classical. “The minute they are exposed to music, it is pop not that there is anything wrong here. But we should be aware of our roots as well. Sleeping Beauty is western classical by Pyotr Ilyich Tchaikovsky. The minute they hear it, they say: ‘Oh my God! What is this? We can’t sing this.’ To get them to change their style of singing is challenging. But then they go back and explore it and enjoy Tchaikovsky which is satisfying for me,” Santana says.

The workshops that ultimately culminate into a production starts with introducing the kids to an animated version of a classical if it is available. When it comes to singing, it is not purely classical; the music is peppy, something that they can identify with.

“For this stage show, we have used instruments like the cello and the flute. This is because I didn’t want to tamper with the classic too much but I introduced drums. The beat here adds a bit of a tempo so that the kids find it bouncy,” Santana who also gets a lot questions from the kids who want to introduce their own touch to the song.

“When they ask me this, I  give them options. if they want it to try their way or my way or a middle path — theirs and mine. I work with each kid individually. While working with the lead of Sleeping Beauty, I see what her range is and customise the song accordingly,” Santana says and tells you that the audience is always in awe since the youngest star is just 4.

Dubey tells you that her background as an special ed makes her job easier. The fact that she loves children is an added advantage. “You are working with specially-able kids. It can test your patience and tolerance. I am a calm person and love kids. When people ask me how many kids I have I tell them two — biological — but tens of thousands otherwise. The minute you talk to children, you are on par with them. I don’t mollycoddle them. There is an intrinsic wisdom in kids,” Dubey explains.

There is an exercise that Dubey insists upon. Each of her artists have to know the lines of other performers. If an artist is unable to perform, other one can step in. This way each kid feels important and knows that nobody is a lead.

“Five-year-old Dipshi knows all the lines of the narrator. If today, if the narrator falls ill, Dipshi will step in,” Dubey says.

Interestingly, the theatrical workshop found its way on to the stage. “We didn’t know what kind of lessons the kids had imbibed. it is easy to perform in front of moms, dads and chachas. The real test is to see them perform in front of an unknown crowd,” Dubey shares.

However, to take Sleeping Beauty to other cities may not be so easy since the cast is so young — 4 to 13. In the past the team has travelled with five mothers as guardians and a young starcast. At best the directors will take the musical to close by places like Chandigarh or even Sohna.

To put out this stage play, it has taken the directors two to three weeks. The kids have been trained for two hours each day with no break.

“Usually we don’t want to prolong the time of the workshops. The time that we work with is crucial. So sometimes we work without a break,” Dubey says.