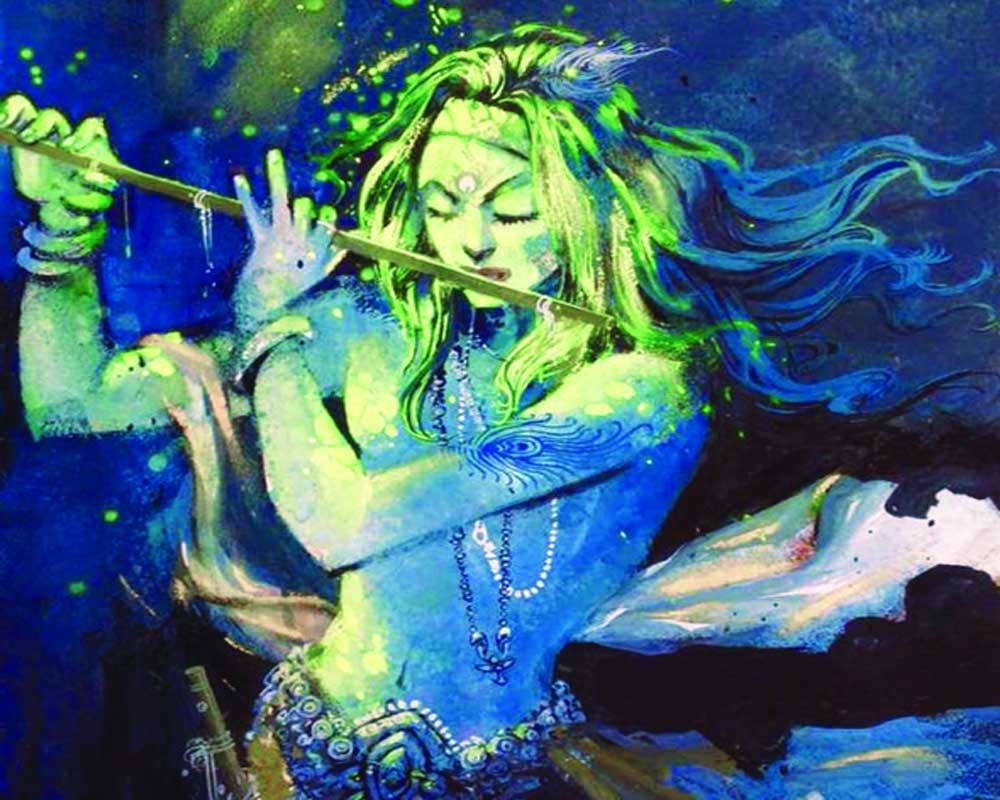 Shri Krishna scores over other great men in history because of his power to influence the thought process and lives of the Indians even to this day, writes Dr. Asha Goswami

Shri Krishna has played a significant role as the builder of Indian nation, along with his other roles — as an emotional guide and spiritual preacher (vide Gita) — the threefold characteristics that are upheld as traits of the great men of world history.

In this role, he excels the other great men of history because of his power to influence the thought process and lives of the Indians — a power he continues to wield even today and perhaps in the ages to come. The sole reason behind this is that he inspires the various aspects of life for an individual. As goes the saying: “In Krishna breathes the soul of India.” It is he who represents the heart and soul of the Indians, as he encompasses the multifarious phases of Indian history and culture.

It would be no exaggeration to say that he is a cherished leader of Indian nation, one who shaped its destiny. For, he was the chief of Yadavas; the great hero of Mahabharata war; the god incarnated teacher of Arjuna. As many great men of the world history, he is assigned with large number of victories in battles. It is said that there was no limit to his strength, power and energy.

Born in the pastoral Yadava clan, he started very young when he displayed his great youthful energy through his various adventures, including slaying deadly enemies (like Kansa and his associates, who are referred to as demons); Putana and others, who were sent to kill him and his people. The role he played at Vrindavana and Mathura as well as at Dwarka only establishes his influence over people.

By killing his maternal uncle, Kansa, he brought peace not only to his clan, the Yadavas, but also the people of the surrounding regions such as Gokula, Vraja and Vrindavana. Further, by defeating Jarasamdha when he attacked Mathura along with his ally Kalayavan, a Greek king, he succeeded in restoring peace in the area. He followed this by shifting his people from Mathura to a new kingdom of Dwarka which he had established in far off place in the sea. According to Krishna saga, India during his times, was divided into small kingdoms and their rulers and kings often aligned with one or against someone. Such conditions provided Krishna with the ample opportunity to exert himself as a Nation-builder by proving his superiority by siding with the worthy neighbouring kings.

It is also said that during Krishna’s times, the Aryans had entered his territory near Yamuna-valley. He made peace with them and later, at Dwarka by encouraging Arjuna to abduct Subhadra, Krishna cunningly forged an alliance between the two mighty clans of the era — the Yadavas and the Pandavas.

This move ultimately proved beneficial for the country that emerged as one strong nation under the rule of the Pandavas. As a preacher of Gita, Krishna further played the role of an unrefuted leader as he not only addressed the despondency of Arjuna, urging him to discharge his duty as a Kshatriya king, but also became instrumental in the Pandavas winning the battle of Mahabharata.

This restored peace in major parts of India under the rule of Yudhishthira at Hastinapore. Krishna then went on to build his own kingdom of Dwarka as safe and free from the opponents. Dwarka nagri, established by Krishna, was said to be surrounded by sea on all sides. Its location proved almost insurmountable to the enemy kings, with whom he had to fight. These kings included Bana, Shalva, Naraka, who were said to be the rulers of Shontipura, Kashi and Assam, respectively.

Further, by overpowering these  hostile kings, he spread peace in those regions and also brought them in alliance either with the Yadavas or the Pandavas. For instance, by killing Bana and Naraka who were rulers of the far-off regions, he succeeded winning over large number of kings and princes to his side whose daughters or sisters numbering sixteen thousand one hundred had been kidnapped and held captive by the evil king, Naraka.

Among his several feats, which provide evidence to his strong Nation-building trait, one is the importation of the heavenly plant called Parijat from king Indra’s kingdom (which sounds like some foreign land) to Dwarka. The second refers to a peculiar type of dance mixed with water sports which was enunciated by Krishna at Dwarka for the recreation of his people. He had accomplished the feat with the help of divine women known as Apasaras (which again sounds like artistes from a foreign land). And finally, his role in the famous Syamantak-Gem episode wherein he succeeded in setting right the vile conspiracy prevailing in his own people for the possession of the precious gem.

Finally, recapitulating Krishna’s role as nation-builder, let us recount that he has discharged this role throughout his life within his all leelas at Vrindavana. Mathura-Dwarka whereby at each step, he ushered in a new era with a new scenario. The killing of Kamsa and his associates to restore peace at Mathura and in the region. Next, his encounters at Dwarka and at Hastinapore during the Mahabharata war, too reveal his many-sided involvement for the preservation of the countrymen by destroying all those who stood against his mission. All his feats establish him as a wise man, a sharp statesman and good administrator — all qualities of a true leader.

The writer is a noted Indologist and authority on Krishnaite Studies