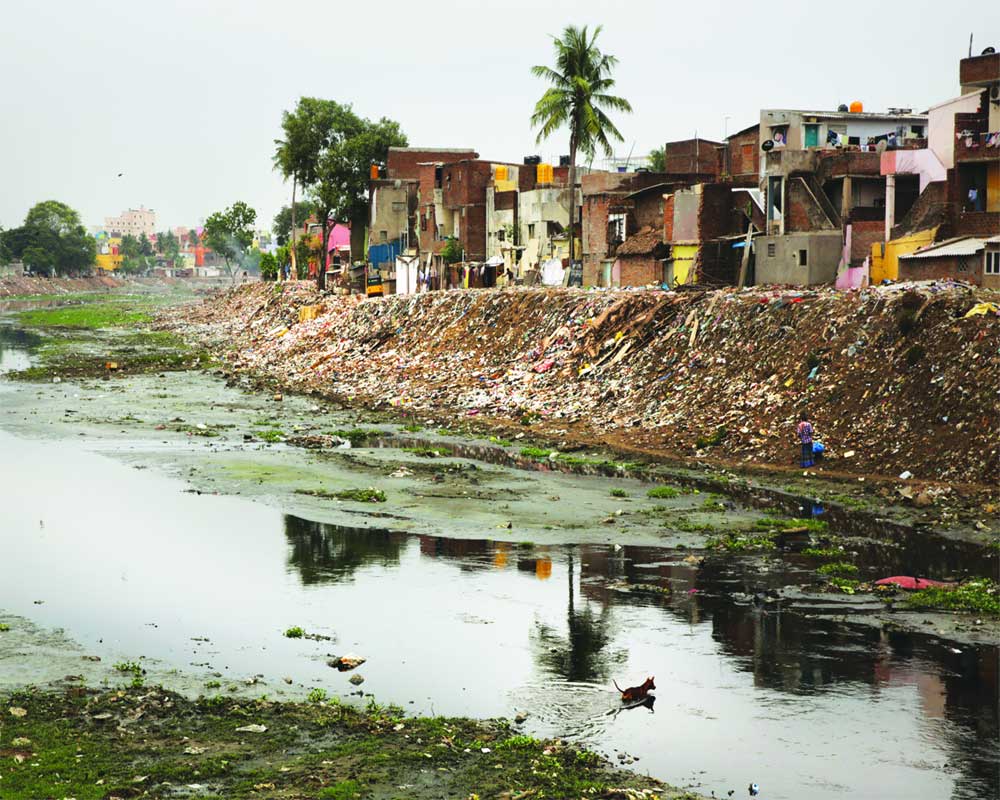 While a strong legislation can end mindless destruction of water bodies by prosecuting violators, innovative ideas and incentives like water-credits or tax benefits can make informed citizens ‘custodians of water’

The severity of the water crisis in India can be gauged from the fact that it was one of the most important issues that hogged Prime Minister Narendra Modi’s speech from the ramparts of Red Fort on the 73d Independence Day. Acknowledging that nearly half of India has no access to potable water, the PM termed the crisis as a serious deterrent in the country’s efforts to combat poverty, and announced an outlay of Rs 3.5 lakh crore for Jal Jeevan Mission to provide water to every household.

The moot point is how the crisis can be overcome in a “good governance” era for a “New India”. Rather than echoing the conundrum and allowing panic to cripple our thinking, let us answer three moot questions concerning the terrible water crisis.

Firstly, that ubiquitous query: Is the water-situation indeed bad? Is it too late, or is there still hope for correction and redemption?

I would say it is a crucial issue and most policy-makers and water resources management departments know that we are late. A lot of time has elapsed without thought or remedial steps since 1971. Yet, being a positivist and privy to ground-breaking technologies that can reshape state of the nation, I can say there remains hope for redemption of the precarious situation.

To help address the ground realities which remain invisible to most of political leaders and bureaucrats, we need to lay responsibility and bring out strong legislation to end mindless destruction of water bodies.

India is blessed with a unique geographical location: river bodies fuel the northern half and sea coast borders from below middle-zone States. There ought to be a law which enforces the supply of water from rivers and the seas via pipeline. Closed pipelines are the answer to stop wastage of almost 80 per cent of water from conservative-forms as mud-based old dams. Authorities should levy heavy fines on violators, but whistle-blowers of water-theft cases must be honoured. Those opposing the national policy to link rivers and sea desalinated water-supply system via robust pipeline technology should be prosecuted under the “essential services” or “treason law”.

Next, the Government should bring into vogue a “water-credits” system based on a ‘reverse water-meter reading” system wherein all water used is supplied back to a central processing plant by users.

There would no longer be exodus of villagers to the cities which have turned into urban meshes of imprisonment, with inadequate amenities and are incommensurate to a growing population. Village panchayats can soon transform into suppliers of water for irrigation needs of the farmers. Each and every drop can be utilised properly as the Israelis do.

India possesses new technological methods to generate electricity beyond the much-publicised solar-wind-hybrid types. These innovative methodologies should be harnessed to end menace of farmer-deaths, unemployment, and water scarcity. While on this subject, a most advanced State like Maharashtra, which has 36 revenue districts, has 18 districts notified as water-starved area. Why? A major cause is the irrational cultivation of sugarcane as a crop bypassing others which would not require as high an amount of water as sugarcane.

Vested political interests and corruption rampant in department of irrigation and water-boards are villains of the present disaster. Drip irrigation was rendered ineffective by few private players, in connivance with wicked officials. Lack of accountability on part of lineage of babulog compounds the issue of good governance. Desalination plants should be set up along the two coastlines and water supplied through pipelines. Pipelines must be declared to be national property and anybody tinkering with these must be declared a “traitor” and fast-track courts bring them to justice with a minimum of life imprisonment, as a deterrent punishment. Having said this, one would still insist upon newer technologies with far-reaching ramifications and path-breaking results as the key to unlocking the “dry” patch of a State which can only mumble — “water, water everywhere, but not a drop to drink”!

The Government of India ought to welcome, appreciate and embrace innovative solutions to tackle the water crisis. One foresees “New India” with Prime Minister Narendra Modi giving the clarion call for water management. People must make it a national movement. I had started the “Rashtriya Sampati Bachao Andolan” with the primary focus on water, since no new reservoirs or dams have been constructed in the past few decades.

Water is a natural resource as well as a national treasure. Lawmakers should undertake padayatras throughout the constituencies to convince the masses about the need to link India via pipelines supplying water of the Brahmaputra and the Ganga down south to Rameswaram or from Konkan or Konaseema sea coasts to interior districts of Bheed, Kalahandi or Ahmednagar, etc.

India can afford to constitute committees for delegating powers but the nation cannot afford to rest on committees to examine land-acquisition related knotty tussles for linking the rivers and seas to its almost 150-billion strong populations. Let there be no more evaporation of water or funds allocated for water supply.

Let every citizen be branded as the “custodian of water”. This awareness campaign should ideally begin at primary school level and permeate higher echelons of society.

Some innovative ideas like local bodies offering an exemption, say 5 per cent, on property tax for the “reverse-water supply metering system” should be adopted. Eventually, we all win. Our future generations win. Humanity can be saved from the brink of extermination. In the ultimate analysis however, the willingness of the people and morality of our society as a whole will determine the shape of a land blessed with many major rivers, minor tributaries and a long coastal belt. It is high time water became the next important topic of public discourse.

(The writer is an eminent jurist and policy-planning expert)